Accessibility links
Wikipedia Teams Up With Academia The reader-produced encyclopedia isn't considered a reliable source in many college classrooms. But now, it's trying something new: It's partnering with students from top public policy programs to help write more entries. 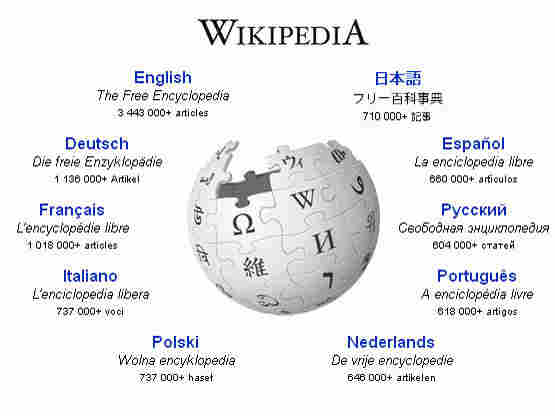 Any college student will tell you that Wikipedia isn't a source you want to cite in a college paper.

"You would get an F, I think, right away on the paper," says Stefano Daniele, a student at Georgetown University.

Ianthe Metzger, also a student at Georgetown, echoes the sentiment. "It has to be a scholarly source; it has to be something, like, legitimate," Metzger says.

The students say Wikipedia is unreliable because anyone can write articles, and the information is always changing.

Rodney Dunican, education programs manager with the Wikimedia Foundation, which operates Wikipedia, knows reliability is a problem, but he says the project isn't meant to fix that.

"I would say it's not so much the goal of making it accurate, it's the goal of how we can increase and improve the articles in the public policy area," Dunican says.

The idea is for students to turn their course research into Wikipedia articles.

Nine universities are participating in it this fall, including Harvard, George Washington University and the University of California-Berkeley.

Rochelle Davis of Georgetown University is teaching Theorizing Culture and Politics, which is kicking off the project by deconstructing a Wikipedia article. Most students, like Adrian Bien, are noticing organizational problems.

"You can literally get just so drowned in information. You just start clicking all these different links, and then you're like, 'Oh wait, I'm reading about, like, zebras,' " Bien says.

Davis says students are supposed to be looking out for things such as misleading statements or missing information.

I would say it's not so much the goal of making it accurate, it's the goal of how we can increase and improve the articles in the public policy area.

Rodney Dunican of the Wikimedia Foundation

"Because they're not experts, they couldn't point out that there were errors," Davis says.

And there are errors in Wikipedia. That's why Davis says she still won't allow her students to cite it.

"It is not a scholarly article. It is not even a credible thing -- it's a starting-off point," she says.

And a starting-off point is what Wikipedia claims to be. The purpose of the project isn't to make it a citable source.

Paul Courant, a librarian and professor of information at the University of Michigan, says library scientists will learn from the experiment anyway.

"If the entries don't improve, that tells us that the crowd-sourcing model is really extremely powerful," Courant says.

For Davis, the project is about students making complex information accessible to ordinary people. She says that's what public policy is all about.

"For them to be actually producing something that isn't just for me, but for them to actually go out in the world with what they have just researched, I think is really exciting," Davis says.

But the thing is, all their work might not actually stay on the site for the world to see.

Andrew Harris, a graduate student at George Washington University, took part in the first Wikipedia pilot project over the summer.

"Just in the, let's say 48 or 72 hours from when I actually ... wrote my paper, people had already made changes and comments on my suggestions. And some people changed stuff I didn't like. I said, 'Well, that's wrong,' [and] changed it back," Harris says.

That's the thing about a wiki -- it's always changing. So, although college students can put the information out there, it might not be there long enough to footnote it.