Accessibility links
Foreign Policy: Meet The New Chair Of Foreign Affairs Last night's Republican takeover means that the Foreign Affairs Committee is changing hands. Josh Rogin of Foreign Policy introduces Florida Congresswoman Ileana Ros-Lehtinen, a Republican with a disciplined staff and no history of deferring to the president on matters of international affairs. 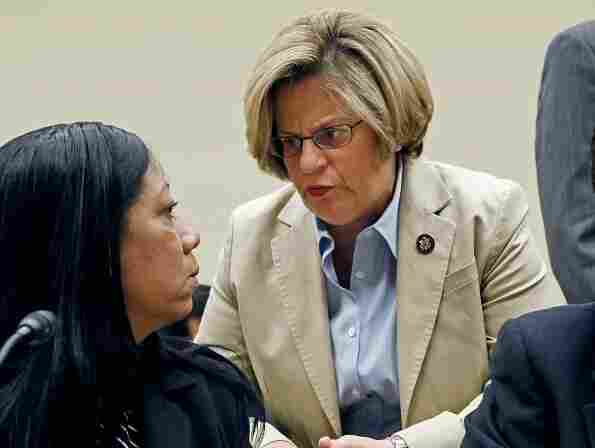 Now that the Republicans have taken control of the House, we here at The Cable would like to introduce you to the next head of the House Foreign Affairs Committee, Florida Congresswoman Ileana Ros-Lehtinen.

Ros-Lehtinen has been a force on the committee for years as the vocal, passionate, sometimes combative ranking Republican. A Cuban-American lawmaker from a heavily Jewish district, Ros-Lehtinen has staked out firm positions on several issues that stand in contrast to now outgoing chairman Howard Berman (D-CA). Her ascendancy as chairwoman will change the tone and agenda of the committee and will pose new challenges for the Obama administration's efforts to advance its foreign-policy agenda.

Over the mid to long term, Ros-Lehtinen is poised to thwart Obama's efforts to move toward repealing sanctions on Fidel Castro and resist any White House attempts to pressure Israeli Prime Minister Benjamin Netanyahu. She isn't likely to move Berman's foreign-aid reform bill through the committee and she is likely to seek cuts in the foreign-aid budget in her authorization bill.

For example, although Berman and Ros-Lehtinen agreed on the need to push tough sanctions on Iran, Berman delayed action on the bill to allow Obama's engagement effort to play out. Ros-Lehtinen might not be so accommodating.

We're also told that there's no love lost between the staffs of Berman and Ros-Lehtinen. Ros-Lehtinen's staff is said to be very disciplined and at the same time aggressive. They are not easy to negotiate with, according to our sources, and very effective at achieving their aims.

In the near term, Ros-Lehtinen could cause complications for the administration's foreign policy in a number of ways. She is a Russia skeptic, and wants more investigation into the civilian nuclear agreement with Russia that is currently before the Congress.  Congress probably won't move to block this deal, but Ros-Lehtinen is sure to schedule hearings to pick apart future deals planned with Jordan, South Korea, and Vietnam.

Immediately after the election, Ros-Lehtinen will be leading a bipartisan congressional effort to demand more information about the administration's planned sale of $60 billion worth of arms to Saudi Arabia, the largest arms sale in U.S. history.

In a previously unreported letter, obtained exclusively by The Cable, Ros-Lehtinen joined with Berman to demand that Secretary of State Hillary Clinton and Defense Secretary Robert Gates answer several outstanding questions about the deal.

"We are writing to raise concerns and pose a number of strategic questions about the impact such sales would have on the national security interests of the United States and our allies," they wrote. The Obama administration defends the deal as vital, and Israel raised few objections.

"There are a lot of questions to be answered on this," a GOP House aide said. "If Israel doesn't strongly object that doesn't mean it's not problematic."

If the GOP is able to exert more control over foreign policy, that will also impact how foreign leaders and foreign governments interact with the United States. Foreign countries will have to pay more attention to Congress, and may further discount President Obama's ability to deliver.

"Gridlock has some implications of its own," said Heather Conley, senior fellow and director of the Europe program at the Center for Strategic and International Studies. "We're sending a message to international leaders that they will have to work both sides of Pennsylvania Avenue."