Accessibility links
10 Takeaways From The 2010 Midterms It was a momentous day in American political history as the Democrats lost the House of Representatives and barely kept their hold on the Senate. When the dust settled, what exactly did we learn about our leaders and ourselves? We turn to scholars and strategists for some answers. 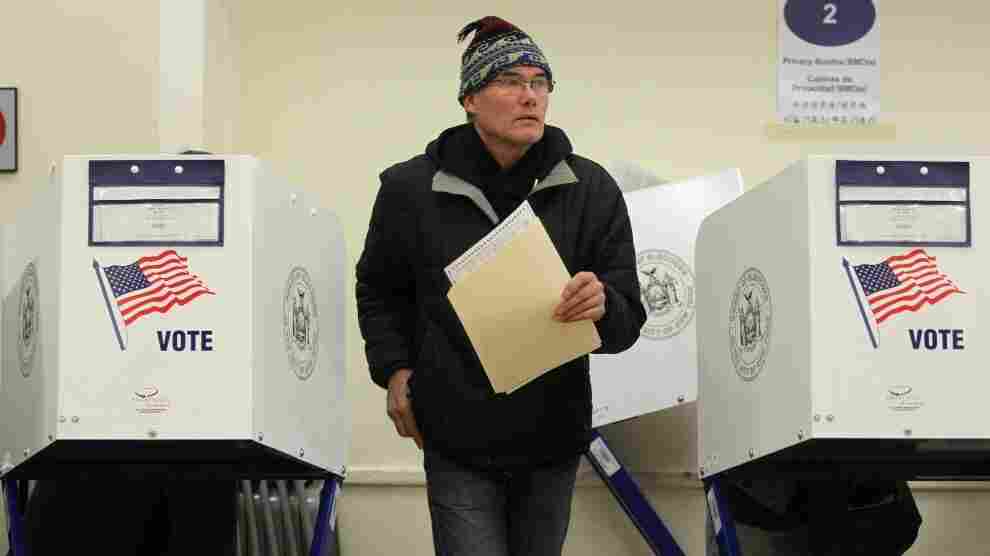 A voter walks away from a booth after marking his ballot at a Manhattan polling place on Tuesday. Mario Tama/Getty Images hide caption 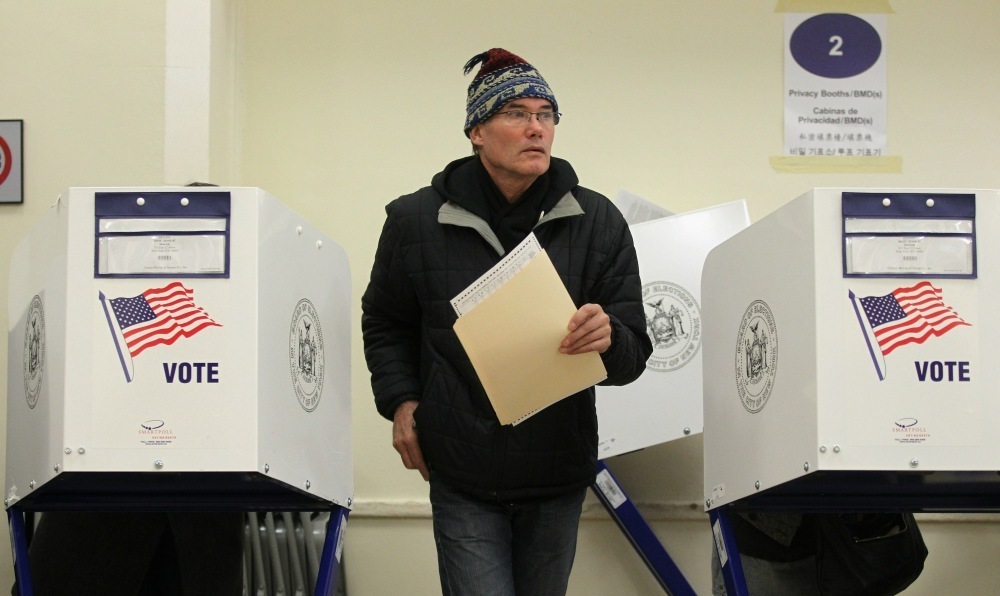 A voter walks away from a booth after marking his ballot at a Manhattan polling place on Tuesday.

Whew. That's over. Well, pretty much. They are still counting votes in some areas where the elections are neck-and-neck.

Tuesday was some kind of day. There were 509 major contests -- 435 congressional, 37 Senate and another 37 state gubernatorial races. More than 100 congressional races were considered highly competitive. The Democrats lost the House of Representatives, but held on -- by a pinkie nail -- to the Senate.

On the morning after, we look back at lessons learned -- small and large -- about people and politics.

We now know, for instance, that there is unhappiness with both major political parties across the board. We know that politicians probably need a foil in order to win. The Republican congressional candidates had one, exemplified by their battle cry: "Fire Nancy Pelosi." It worked. Pelosi has been fired as speaker of the House. She fired them up. The Democrats didn't have the equivalent enemy.

We know there are rising stars of all stripes -- Republicans Marco Rubio in Florida and Nikki Haley in South Carolina and Democrat Andrew Cuomo in New York. And fallen stars, too. Linda McMahon in Connecticut and Meg Whitman in California taught us that you can spend millions and millions of your own money and still lose. More than $3.5 billion was spent in this election cycle, according to CNN, making 2010 the most expensive midterms in history.

We study monumental moments such as Tuesday's elections and try to glean meaning from them. And as the dust settles, we ask questions of some keen-eyed scholars and strategists. Such as ...

What did we learn from the 2010 midterm elections about:

1) The So-Called Gender Gap. Kathleen Dolan, author of the 2004 book Voting for Women: How the Public Evaluates Women Candidates, says the gender gap usually finds a majority of women voting for Democratic candidates and a majority of men voting for Republicans.

In 2010, however, "there appears to be a bit of a shift in that pattern," Dolan says. "In several races around the country, the size of the gender gap was much smaller than usual and, in other races, a plurality or majority of women voters chose Republican candidates." For example, according to CNN exit polls, Democratic senatorial candidates in Arkansas, Iowa, Missouri and New Hampshire lost among both female and male voters -- leading to the election of Republican senators in each of these states. At the same time, Democratic senatorial candidates in California, Connecticut, Delaware and New York won with a majority of votes from both women and men, which demonstrates a reversal of the typical pattern of male support for Republican candidates.

While a handful of races conformed to the usual gender gap theories, Dolan says, "what the unsettled patterns of voting among women and men in this election tell us is that women are subject to the same forces and trends that men voters are. In a year when the national mood pulls voters toward Republican candidates, there is little reason to expect that women as a group would stand impervious to this pull. And much of this movement toward Republican candidates among women was likely among independent voters as it was among men."

2) The Power Of Sarah Palin. Because of the high-visibility endorsement of many Republican women -- such as senatorial candidates Kelly Ayotte in New Hampshire, Christine O'Donnell in Delaware, Sharron Angle in Nevada and Carly Fiorina in California and gubernatorial candidates Mary Fallin in Oklahoma and Nikki Haley in South Carolina -- by the omnipresent Sarah Palin, many political observers assumed that 2010 would be the year of the "Mama Grizzly."

Dolan, who teaches political science at the University of Wisconsin in Milwaukee, says there is little evidence that Palin's endorsement of female candidates had much of an impact. It's true that Ayotte, Fallin and Haley won, but O'Donnell, Angle and Fiorina lost their races. "It is not surprising that the Republican candidates won in Oklahoma, New Hampshire and South Carolina, regardless of their sex," says Dolan. "It is probably the case, especially in this election year, that the Republican candidate would have won in each of those places with or without Palin's endorsement and even whether or not they were women or men. O'Donnell and Angle, with the support of both Palin and Tea Party activists, were still not able to beat their Democratic male opponents."

3) Taking The Low Road. Candidates in 2010 "didn't need to run negative campaigns," says Trevor FitzGibbon of the left-leaning public relations firm FitzGibbon Media. "Outside groups ... did the dirty work for them."

The Supreme Court's decision in Citizens United v. Federal Election Commission earlier this year, says FitzGibbon, "allows corporations to buy the elections, and those corporations played on the fears of an electorate already high with anxiety due to a struggling economy."

4) Taking The High Road. "Senatorial candidate Russ Feingold of Wisconsin and congressional candidate Tom Perriello of Virginia took the high road and fought for their principles -- but at the end of the day, they couldn't withstand the money that the corporations spent," FitzGibbon says. "That's why it is critical for the Democrats to pass the Fair Elections Now Act in the lame duck session -- they have nothing to lose. They can go out on a high note and give the finger to the corporations, the Supreme Court and the new 'RepubliCorps.' "

5) Democrats Who Have Supported President Obama. "For the time being, at least, they have lost their legislative mojo, their larger sense that history was at their backs, that people think they are clearly in the right," says Mac McCorkle, who teaches the politics of public policy at Duke University and the University of North Carolina. "So before deciding on their next moves, they will probably want to see how the Republican challenge starts to shape up or splinter in Congress and how President Obama starts to negotiate things -- beginning with his press conference today."

6) Democrats Who Have Not Supported Obama. Joe Manchin, the Democratic senator-elect from West Virginia, who ran against many Obama policies, and remaining "Blue Dog" Democrats in the House -- Heath Shuler, Larry Kissell and Mike McIntyre of North Carolina, for instance -- who voted against Obama's health care reform plan and survived, "probably feel empowered by their independence from Obama," McCorkle says. "But at the same time they probably feel very endangered -- like bomb survivors who avoided the first wave of danger, but worry that another wave is coming and will be able to target them even more closely and accurately."

7) The Victorious Tea Party Candidates. They stuck to their guns, says Diana L. Banister of the right-leaning public relations firm Shirley & Banister. "Even in the races where the national media and in some cases the Republican establishment tried to vilify the candidates, they stood firm to their conservative principles and fought hard to win. Most of these candidates will now have an opportunity to act on those principles in Congress and communicate why those values are important to the future of the country."

8) The Outlook For Moderate Republicans. "With this election 'moderate' Republicans will hopefully understand that the American people will not stand for a government that is too big and spends too much," Banister says. "There is no compromise on fundamental Republican issues of lower taxes, less spending and more freedom for all Americans. This is what this election should tell all Republicans and if they don't take on these issues immediately they will be ousted just like many Democrats were yesterday."

9) The Challenges Ahead For President Obama. "If you are President Obama," says presidential historian Douglas Brinkley, "you've still got the Senate; you've got the presidency. The Republicans control the House, so there's some blame to be shared if things go wrong. I think President Obama has to use executive power more."

Brinkley also believes that Obama, in the wake of the Democratic defeats yesterday, has to think beyond the quagmire of domestic problems. "He needs to make his signature initiative in the field of diplomacy," Brinkley says. "I would go with China like President Nixon did in 1972, spend time in homes with the Chinese people, visit the Great Wall, work on U.S. and Chinese trade and environmental and human-rights policies."

Rather than just focus on issues at home, Brinkley says, "maybe Obama should get known for something else."

10) The American People. "Every midterm election, the American public gets buyer's remorse," says Brinkley, who also teaches history at Rice University and is a fellow at the James A. Baker III Institute for Public Policy in Houston. "It happened to Ronald Reagan in 1982. Then the Democrats picked up steam and it happened to Bill Clinton in 1994. There's always a bit of a backlash."

"We're a very impatient society," Brinkley says. "People want problems solved quickly. It's a bit of a curse that the art of winning the presidency is to talk with grand rhetorical flourishes. But the act of being a president is to deliver on those promises. We are finding out that it's often tougher than candidates think."

We are also discovering other things about ourselves. We may never have a post-racial, post-partisan, post-anything America. What we do have, what we always have, is a changing America. A nation in flux. A work in progress. And regress. A country that booms and busts at the same time.

And there is one more lesson from the midterm elections. We should take notice of what happened on Nov. 2, 2010. History was made. Some say that by not remembering it, we will be condemned to repeat it -- in 2012 or 2014.

We know others who would like that repetition very much.