Accessibility links
John Boehner: From Leadership To 'Backwater' And Back Ohio Rep. John Boehner -- who is expected to become the next speaker of the House after Republicans swept to control in Tuesday's election -- has outlasted some of the biggest names in the Republican Party's 10-year roller-coaster ride through changing leadership. 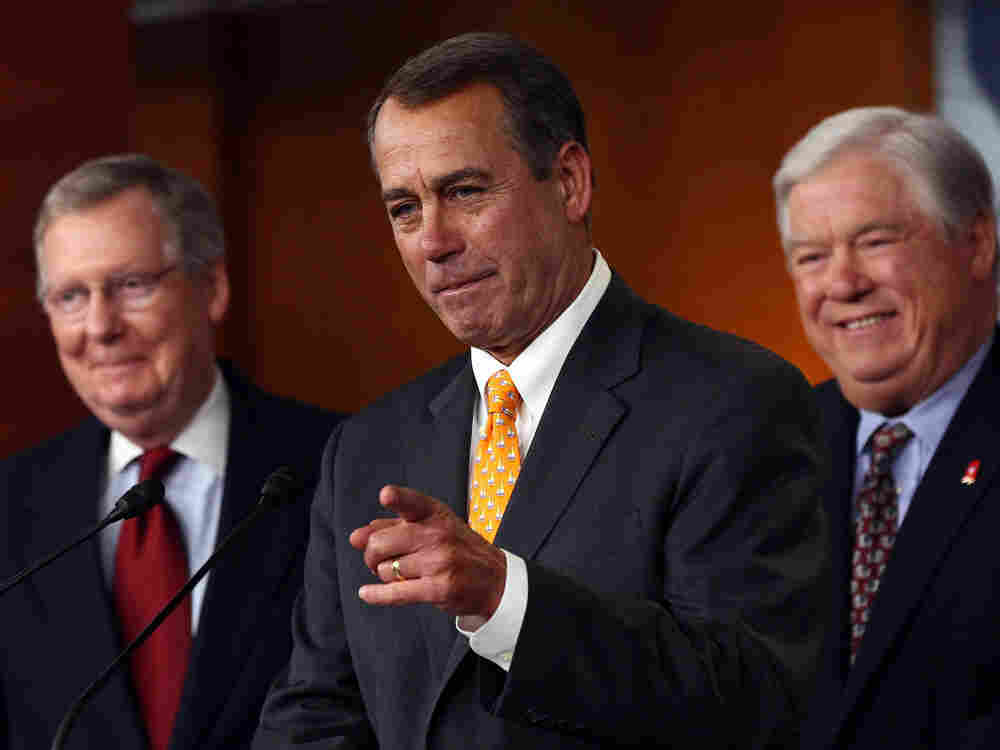 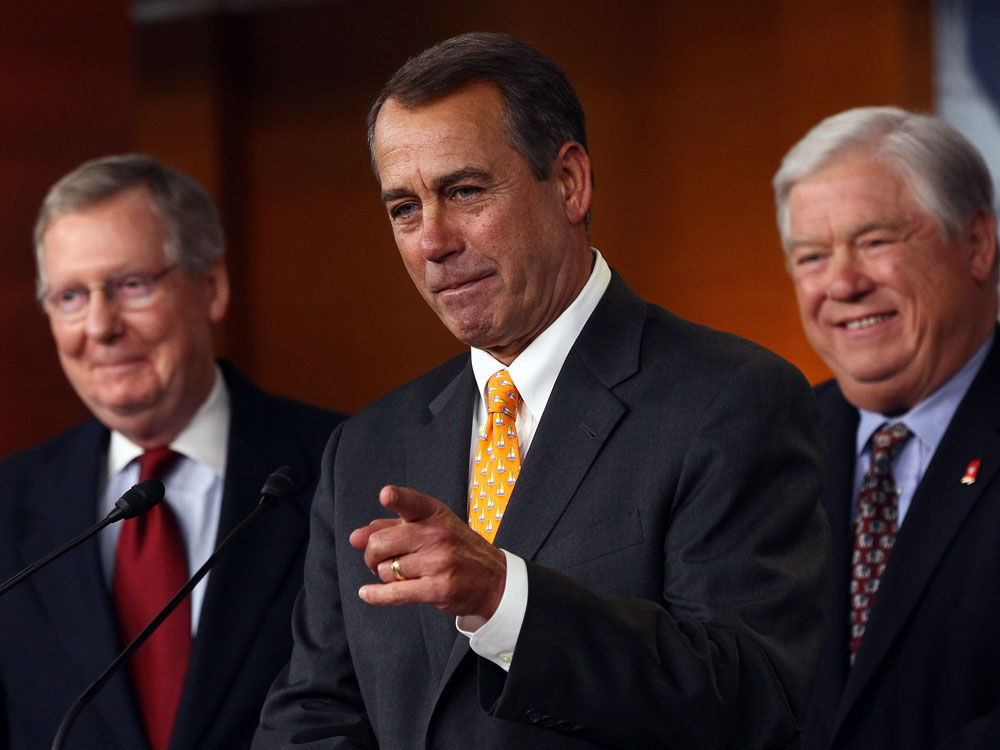 Ohio Rep. John Boehner -- who is expected to become the next speaker of the House after Republicans swept to control in Tuesday's election -- has outlasted some of the biggest names in the Republican Party's 10-year roller coaster ride through changing leadership.

Those names include Newt Gingrich, Tom DeLay and Dennis Hastert -- all party leaders who have resigned. But while Republicans suffered major losses to Democrats under Boehner's watch, he is now poised to take the gavel -- 20 years after he first arrived at the Capitol steps.

And he has his work cut out for him, says former GOP Rep. Bob Walker, now a lobbyist. "It is much harder to actually win every day and do the things that are necessary in order to actually put together a public policy agenda and then move it forward than it is to sit on the sides and criticize," he says.

But the hits Boehner has taken over the years have made him a survivor, Walker adds.

"John has now had that experience both in leadership under Newt Gingrich as committee chairman and as minority leader watching the Democrats pursue their agenda under Nancy Pelosi," he says. "I mean, I think that gives him a sense of perspective now about how you do public policy."

Boehner was born in southwestern Ohio in 1949 -- the second of 12 kids. He worked in his family's restaurant. Later, he did odd jobs and put himself through college. Then he landed at a plastics company, where he made his fortune.

When Boehner came to Washington in the early 1990s, Democrats had ruled the House for nearly 40 years. He won the seat of an Ohio congressman tarnished by a sex scandal, and he was among a group of young lawmakers who made a name for themselves denouncing the old guard.

"As freshman members of the House from both parties," he said at an event in 1991, "we are here today to call for change, to call for reform."

Abuses at the House bank and post office made headlines, but even congressional perks like the Capitol barbershops were ripe for attack by Boehner and the other up-and-coming Republicans tagged the Gang of Seven.

Boehner recounted those early days at a speech before the American Enterprise Institute a few weeks ago.

"I can remember early on in my career, as a member of the Gang of Seven, when I got long stares from the members -- many of them in my own party," he recalled. "Some would just walk the other way; others would be right smack in my face. And I still think I have a permanent bruise at the top of my chest from members giving me this," he added, jabbing a finger. 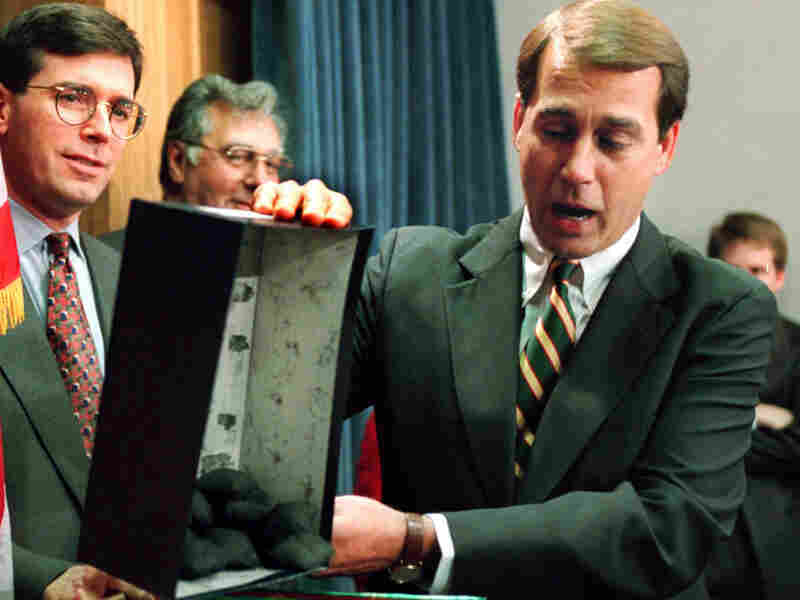 Boehner dumps out the coal that he called a Christmas gift to President Clinton during a news conference to discuss the federal budget in 1995. When Newt Gingrich became House speaker that year, he took Boehner into the inner circle of GOP leaders. Denis Paquin/AP hide caption 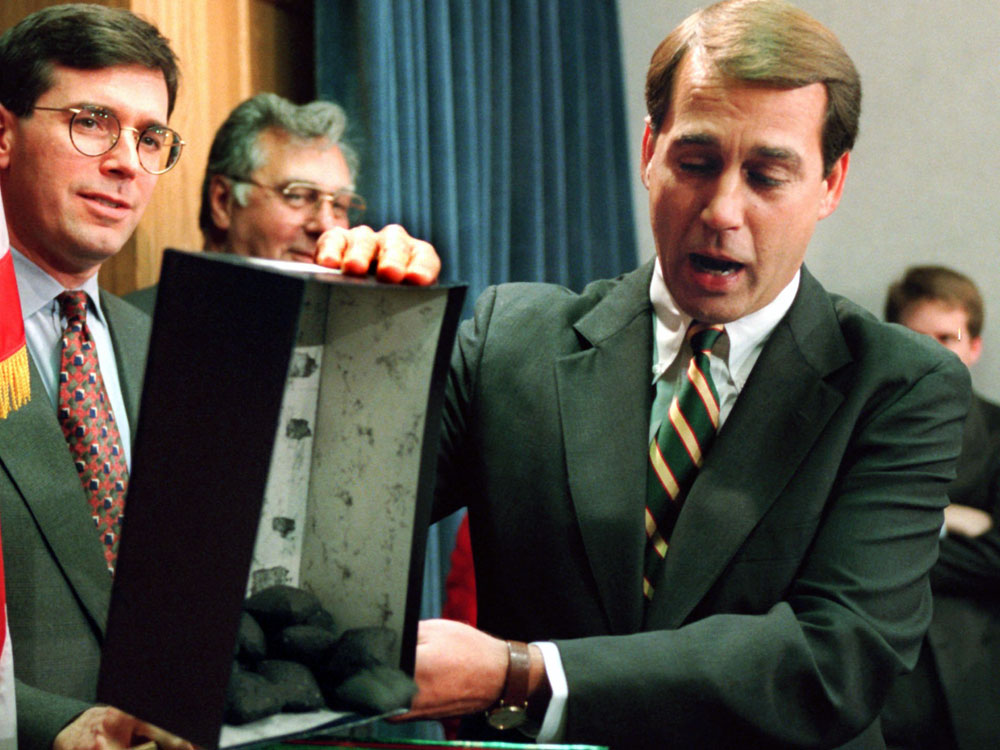 Boehner dumps out the coal that he called a Christmas gift to President Clinton during a news conference to discuss the federal budget in 1995. When Newt Gingrich became House speaker that year, he took Boehner into the inner circle of GOP leaders.

From Leadership To 'Backwater' And Back

When Gingrich became House speaker in 1995, he took Boehner into the inner circle of GOP leaders who drafted the "Contract With America."

But when the tide turned and Republicans lost seats in the next two elections, Gingrich was gone. Boehner -- already tainted by a mini-scandal over his handing out of corporate campaign checks on the House floor -- was rejected by the Republican caucus.

He parked himself on the Education Committee with California Democrat George Miller and dug in for the long haul.

"Now no one is going to confuse me and George Miller for ideological soul mates -- I think most of you get that," Boehner said in his AEI speech. "But in just a few years, we were able to work together to transform our committee from a backwater panel that nobody wanted to be on to the center of some of the biggest issues of the day."

One of those issues was the committee's negotiation of the controversial No Child Left Behind legislation in 2001. It was a high-profile bipartisan moment that's all but a distant memory now. These days Boehner routinely dismisses Democrats' proposals -- often before they are formally announced.

But it also gives context to the kind of speaker that Boehner told the AEI he wants to be. For instance, Boehner said, committee chairs should have more power to write legislation -- a deviation from the top-down approach taken by Gingrich and DeLay.

"When it comes to the floor, if there is a more open process and members are allowed to participate, guess what? It lets the steam out of the place," he said.

Now that Tea Party activists have flexed their muscles, there could be a lot of steam.

But during a news conference Wednesday on Capitol Hill, Boehner dismissed those who say he could have a tough time holding his caucus together:

"What unites us as Republicans will be the agenda of the American people. And if we are listening to the American people, I don't see any problems incorporating members of the Tea Party along with our party in a quest that's really the same."

He's set to get a chance to prove it this winter.