Accessibility links
Obama Humbled By Election 'Shellacking' The president said he took responsibility for Democratic losses in the midterm election. And he pledged to work with Republican leaders on Capitol Hill on issues ranging from tax cuts to energy policy, even as GOP leaders reiterated that they wanted to stop his agenda. 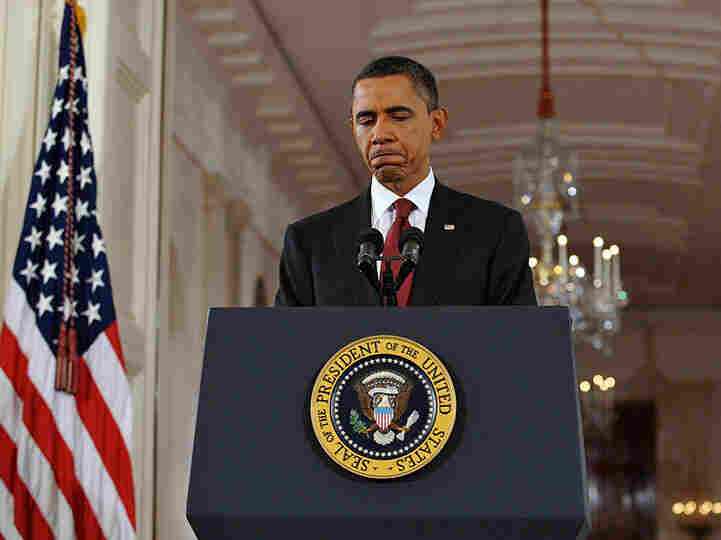 Hours after Republicans captured the House of Representatives and slashed the Democratic majority in the Senate, a subdued President Obama said in a White House news conference that voters were mostly preoccupied with the slow economic recovery. Obama would not concede that a Republican election rout marked a massive repudiation of his agenda, but he did shoulder the blame for deep voter frustration over the economy. Mandel Ngan/AFP/Getty Images hide caption

A sober President Obama acknowledged Wednesday that he took "a shellacking" in the midterm election and that his once highflying relationship with the American voter had hit rocky times.

"There is an inherent danger in being in the White House and being in the bubble," said the president, whose party on Tuesday lost control of the House in a historic Republican wave. The GOP is expected to gain at least 60 seats, the biggest increase in more than seven decades. Democrats barely clung to their Senate majority.

"The responsibilities of this office are so enormous," Obama said, that "sometimes we lose track of the ways that we connected with folks that got us here in the first place."

The president, who drew comparisons with midterm losses suffered by presidents Reagan and Clinton during their first terms, pledged to work with GOP leaders on issues ranging from tax cuts to modest forward movement on energy policy,

But he warned Republicans that while frustrated voters may have spurned him and his party, they want to move forward and not "relitigate" the past two years.

GOP leaders, including House Speaker-in-waiting John Boehner and Senate Minority Leader Mitch McConnell, clearly disagree: They say they are poised to immediately start overhauling the recent health care legislation. At a Wednesday morning press conference, Boehner referred to the health care initiative as a "monstrosity" that needs to be replaced.

McConnell said voters sent a message that they want to stop Obama's agenda. Republican leaders say they are committed to a smaller government and have called for discretionary spending to be curtailed to 2008 levels.

Obama defended his administration's initiatives -- from the economic stimulus package to the auto industry bailout, as well as the health care bill -- as tough decisions that were "right for moving the country forward."

"It's understandable that folks said to themselves, maybe this is the agenda as opposed to a response to an emergency," he said, and viewed it as an overreach with the "price tags that went with that."

He suggested that Americans would have been more confident in the administration's actions if the nation's unemployment rate was 5 percent now instead of 9.6 percent.

He wants to renew a conversation on energy policy -- though something far less than the comprehensive House plan that stalled in the Senate. He said he's open to negotiating terms of the extension of the Bush-era tax cuts set to expire at year's end, and he even said he was open to tweaking health care legislation in areas of concern to Republicans.

Republicans are looking to permanently extend Bush tax cuts for wealthier Americans; Democrats -- including Obama -- have sought to end those cuts, but extend tax cuts for the middle class. The president Wednesday appeared newly open to negotiation.

And we were in such a hurry to get things done that we didn’t change how things got done. And I think that frustrated people.

President Obama, acknowledging that he had disappointed supporters

Obama also touted his coming trip to Asia as proof of his administration's efforts to open markets and create new American jobs.

He also took a look back at the past two years and acknowledged that he had disappointed supporters.

"When I won election in 2008, one of the reasons I think that people were excited about the campaign was the prospect that we would change how business is done in Washington," he said. "And we were in such a hurry to get things done that we didn't change how things got done. And I think that frustrated people."

He seemed contrite when asked specifically about the wheeling and dealing that he and the administration engaged in during the health care debate.

The negotiations, he said, were an "ugly mess" and affected how people ultimately viewed the final legislation. "I regret that we couldn't have made the process more, healthier than it ended up being," he said. "But I think the outcome was a good one."

Obama took responsibility for Tuesday's losses, expressed sadness for Democratic lawmakers who lost while standing by the administration's policies, and defended his more controversial efforts. Pronouncing himself humbled, he pledged to negotiate with Republicans on a much less aggressive agenda.

"Over the last two years we have made progress," Obama said, "but clearly too many Americans haven't felt that progress yet and they told us that yesterday.

"As president, I take responsibility for that," he said.