Accessibility links
Legislative Legacy Works To Pelosi's Detriment During Nancy Pelosi's four years as speaker of the House, Congress approved the massive health care overhaul, an $800 billion stimulus bill and a multibillion-dollar rescue of the banks. But her accomplishments were denounced by angry voters this campaign season, and now she must relinquish the speaker's gavel. 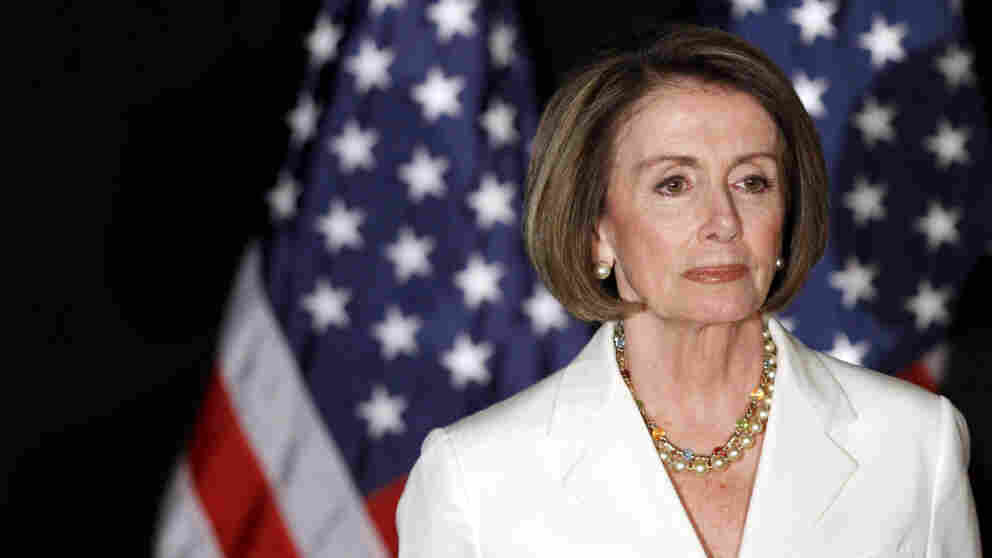 House Speaker Nancy Pelosi waits to speak to supporters at an election night party in Washington on Tuesday. The California Democrat must relinquish the speaker's gavel after Republicans regained control of the House. Alex Brandon/AP hide caption

During Nancy Pelosi's four years as speaker of the House, Congress approved the health care overhaul -- widely considered the most significant piece of domestic legislation since Medicare -- along with an $800 billion measure to stimulate the economy and a multibillion-dollar rescue of the banks. It is a legislative legacy that rivals the accomplishments of any speaker in modern times.

It also most likely led to her downfall.

From the moment she accepted the speaker's gavel, Pelosi understood her unique place in history as the first female speaker of the House.

On Jan. 4, 2007, she became the most powerful woman in the country, second in line to succeed the president, in charge of the institution that set government spending and tax rates, the position that set the agenda for the 435-member House of Representatives.

Pelosi's rise to power in the House was relatively swift. The daughter of a former congressman and mayor of Baltimore, Pelosi won a special election in her San Francisco district in 1987. She had a post on the Appropriations Committee and rose to become the Democratic whip and then minority leader. When Democrats won control of the House in the 2006 elections, the speakership was hers.

She wryly hinted at the challenges that she discovered go with the post.

"I am impressed by all of the decisions that the new speaker has to make," she said.

One of Pelosi's first decisions was to create an outside panel to review ethics charges. It was a key part of the Democrats' 2006 campaign platform.

"You have to first drain the swamp," she said, "so our first order of business in the House would be a package for reform, for civility and for fiscal discipline." 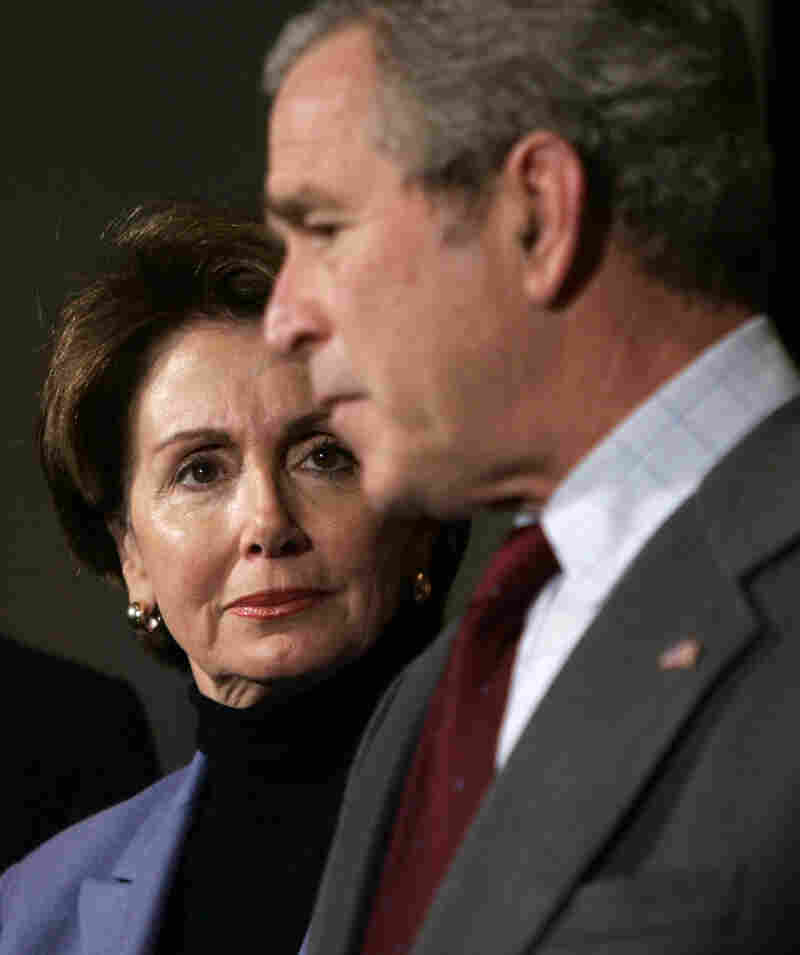 During Pelosi's first term as speaker, her biggest challenge was working with Republican President George W. Bush.  She also had to come to grips with what would remain an obstacle throughout her tenure: a Senate that, though also under Democratic control, had its own, slower way of doing things.

One issue where those difficult relationships proved insurmountable was the war with Iraq. Pelosi and most House Democrats had run on their opposition to the war and their promise to withdraw U.S. troops.

On other issues Pelosi had greater success. Democrats raised the minimum wage for the first time in a decade, and they increased gas mileage standards for cars. Spending on veterans went up, as did college aid. But those accomplishments were dwarfed by an urgent request from President Bush's Treasury secretary, Henry Paulson. He called on Congress to rescue the nation's biggest banks, many of which in August of 2008 were teetering on the brink of collapse. Pelosi went along.

"If even a fraction of what they were saying is really the case, there is really  need for us to proceed. It's not anything you can take a chance on," she said. "The only thing that was strange to us [is] that they had come in so late about a problem that was so vast. This was very, very, very bad news of a magnitude that spoke out for some of Congress' intervening."

Congress ultimately approved what became the $700 billion TARP program. It was a vote that would come back to haunt Democrats, despite the fact that by most accounts it had succeeded in preventing the nation's largest financial institutions from collapsing.

In November 2008, Democrats gained another 21 seats in the House, led by enthusiasm for their presidential candidate, Barack Obama, and helped by Pelosi's prodigious fundraising abilities.

The heady days of the inauguration of the nation's first black president on the Capitol's West Front were soon tempered by the sober reality inside the building as Congress tried to deal with the worst economic recession since the Great Depression.

At the president's request, the House took up a massive measure aimed at stimulating the economy. It passed without a single Republican vote.

"Today, we are passing historic legislation that honors the promises our new president made from the steps of the Capitol, promises to make the future better for our children and our grandchildren. We are moving the ship of state in a new direction in favor of the many, not the few," Pelosi said. "With this vote today, we are taking America in a new direction."

That spring, Pelosi faced another, more personal test: whether she was telling the truth when she denied ever having been briefed by the CIA about enhanced interrogation techniques used on suspected terrorists. The issue led to weeks of accusations and recriminations about which Pelosi refused to comment. When she finally did address the issue she leveled a serious charge against the CIA.

"They talked about interrogations that they had done and said, 'We want to use enhanced techniques, and we have legal opinions that say that they are OK. We are not using waterboarding.' That's the only mention that they were not using it. And we now know that earlier they were," she said. "So yes, I am saying that they are misleading -- that the CIA was misleading the Congress."

The imbroglio soon passed, as Pelosi increasingly turned her attention to the massive overhaul of the nation's health insurance system. There were endless hearings, meetings between the White House and Democratic leaders, rallies and protests and vocal opposition from Republicans from the start. But Pelosi never lost sight of her goal. Universal health care had been a long-standing priority for Democrats, and after an arduous display of legislative sausage-making, it was finally approved in March of 2010. 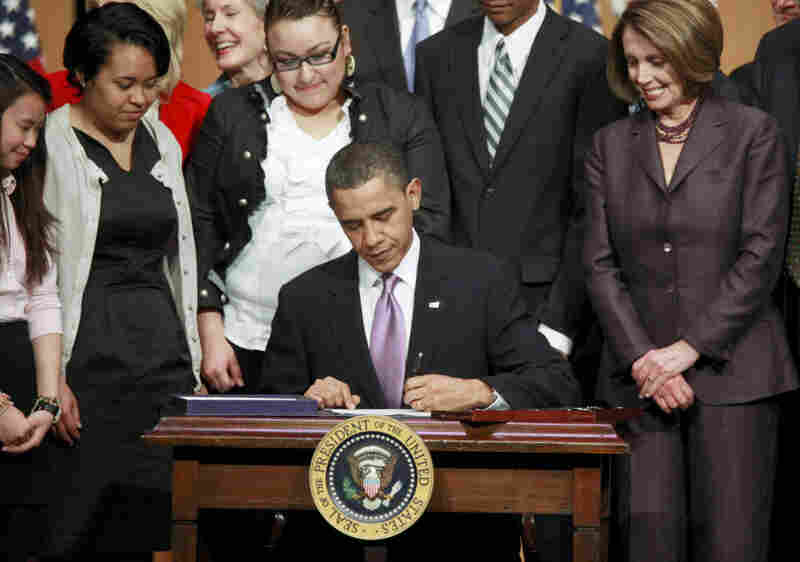 "I knew I came here to vote for health care for all Americans," she said. "That has been a pillar of who I am and who we are as Democrats, but I didn't think I would be leading the way as speaker of the House, that's for sure."

And as he signed the health care measure, President Obama had nothing but praise for the woman who guided its passage, calling Pelosi "one of the best speakers the House of Representatives has ever had."

But the cheers quickly faded, replaced by taunts of angry voters this campaign season, many of whom denounced Pelosi's biggest accomplishments. They labeled the health care overhaul "Obamacare," a government takeover. They characterized the stimulus as a failure and bitterly denounced the bank bailouts. Pelosi was demonized by Republicans, as she had helped demonize an earlier speaker, Newt Gingrich. The chairman of the Republican National Committee, Michael Steele, traveled the country on a "fire Pelosi" bus tour, and Republican candidates across the nation acted as though she was their opponent.

Pelosi shrugged it off, saying the only thing that really mattered was winning. But not enough Democrats won in Tuesday's midterm elections to prevent Pelosi from having to relinquish the speaker's gavel.