Accessibility links
FBI Reaches Out To Shooter In Military Site Attacks Investigators in Virginia are looking for the person behind five shootings in the past few weeks at the Pentagon and other military locations -- all, they say, traced to the same weapon. So far, the shooter has attacked when the buildings were mostly empty, and no one's been hurt. The FBI wants to make sure it stays that way. 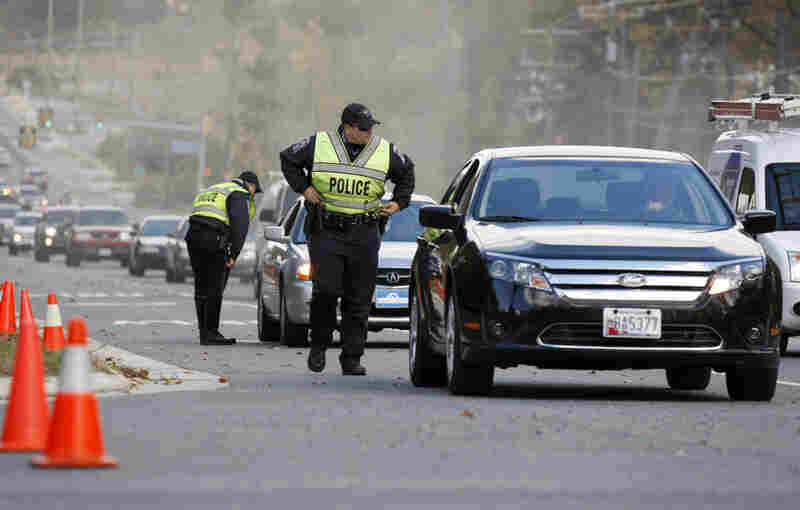 Police officers guard the entrance to the National Museum of the Marine Corps in Triangle, Va., on Friday. Officials are investigating an overnight shooting at the museum, the fourth recent shooting at military buildings in the Washington area. Luis M. Alkvarez/AP hide caption

Investigators in Virginia are looking for the person behind five shootings in the past few weeks at the Pentagon and other military locations -- all, they say, traced to the same weapon.

"We believe the suspect has a grievance surrounding the U.S. Marine Corps," John Perren, who leads the FBI's Washington field office, said at a press conference last week. "It may be that he feels he's been wronged by the Corps in his professional and/or personal life."

At times, Perren seemed to have only one listener in mind: the shooter himself.

"We'd like to know what this grievance is and what we can do to try help resolve it," he said. "We're willing to listen to him and hear his side of the story."

Investigators are working from a psychological profile. Odds are the suspect is probably -- but not definitely -- a male, a current or former service member who has recently suffered a divorce, a job loss or some other setback.

The shootings occurred at the Pentagon, the Marine Corps Museum and recruiting sites. So far, the shooter has attacked at night or in the early morning hours when the buildings were mostly empty. No one's been hurt.

The FBI wants to make sure it stays that way. They're taking a careful approach in the case.

"We do not believe it is his intention to harm innocent citizens or Marines," Perren said. "Acting out in this way, however, can eventually lead to disastrous or tragic consequences that we all wish to avoid."

For many in the metropolitan Washington, D.C., law enforcement community, the shootings bring up bad memories.

Eight years ago, a pair of snipers killed 10 people in the area. Charles Moose, who was the Montgomery County, Md., police chief at the time, sometimes got criticized for talking too much about the investigation. 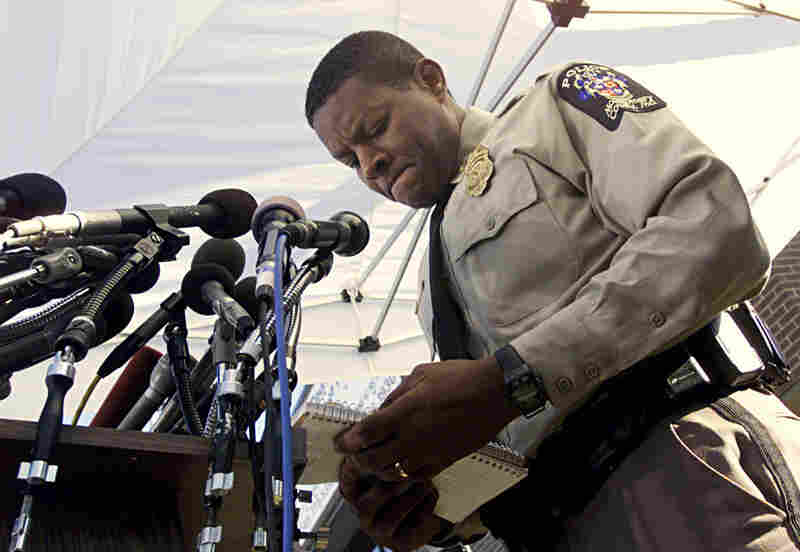 He fought through tears in 2002 on a day when the snipers shot a young boy as he arrived at school.

"Because here in the Washington metropolitan area, we have a level of fear that we're not used to," Moose said. "But today it went down to the children. Now all of our victims have been innocent, have been defenseless, but now we're stepping over the line because our children don't deserve this."

Chuck Wexler is executive director of the Police Executive Research Forum, which advises police departments in big cities. He studied the sniper investigation and says there were a lot of different opinions among law enforcement officials about what information should go out.

Wexler said the FBI task force is now balancing the need to share information with the public against the need to keep some details secret to protect the investigation.

"The public can be incredibly important in knowing what to look for and identifying who's responsible," Wexler said.

Given the latest shooting this week, at a Coast Guard location, the FBI could use more help from the public.

For the time being, officials are going to be taking a closer look at military sites in the area just in case the late night shootings turn into something more serious.