Accessibility links
Foreign Policy: Victories For Muslim Americans Rhetoric around Muslim-Americans has grown more and more hurtful to many in recent months, but Marc Lynch of Foreign Policy points out that this week's elections actually contained good news for Muslims. Both Muslim members of Congress were easily re-elected, and in New York the Park51 Mosque debate did not seem to influence voters. 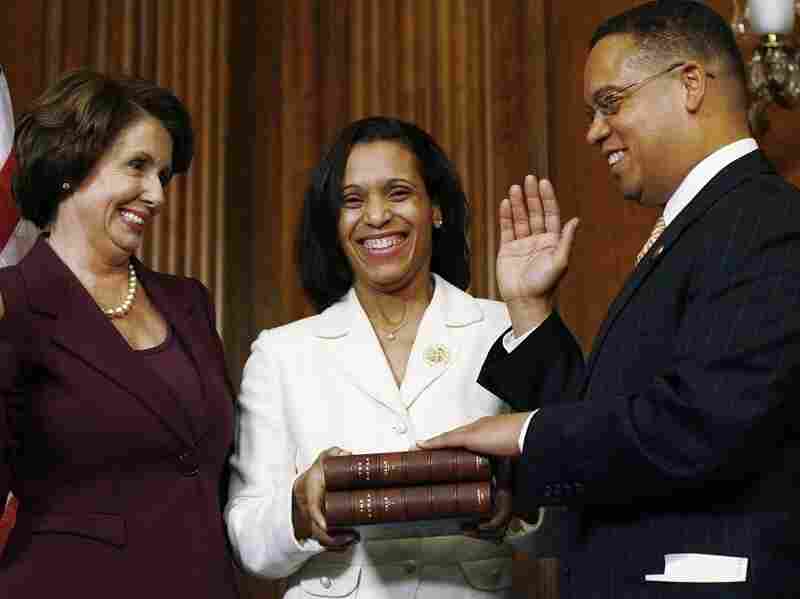 U.S. Rep. Keith Ellison (D-MN)  takes his oath of office in 2004 by swearing on a Koran Ellison is the first Muslim elected as a U.S. Congressman, he was later joined by Andre Carson. Win McNamee/Getty Images hide caption

Marc Lynch is associate professor of political science and international affairs at George Washington University, where he is the director of the Institute for Middle East Studies.

The last few months of American political life have been defaced by rampaging anti-Muslim rhetoric, from the manufactured controversy over the Park51 mosque in New York to the Florida Quran-burning threats to hysterical warnings about 'creeping sharia' and stealth jihad in the halls of Congress. The victory of the truly absurd ban on applying sharia in Oklahoma may be only the first of the legislative fruits of this ugly trend. The volume and aggressiveness of this anti-Islamic trend has had some real costs both at home and abroad, most likely drowning out the earnest efforts of the Obama administration to rebuild relations with the Muslims of the world. Hopefully that noise will fade now that Election Day has come and gone.

But in the meantime, there's some quiet good news. The "Ground Zero Mosque" didn't get Carl Paladino anywhere near the New York Governor's Mansion. As political junkies will recall, the leader of a major Tea Party group explicitly called for Keith Ellison (D-MN) to be defeated because he "is the only Muslim member of congress. He supports the Counsel for American Islamic Relations, HAMAS and has helped congress send millions of tax dollars to terrorists in Gaza [insert 'sic' as you like]." All the better then to realize that both Muslim members of Congress -- Ellison and Andre Carson (D-IN) -- cruised to re-election yesterday and that nobody seems to have even much noticed.

The very fact that their wins have thus far been a non-issue is one of the more encouraging things I've come across today.  I can only hope that Muslims around the world notice their victories, and place more weight on their effective participation in American democracy than they do on the Oklahoma referendum or on the loud, angry voices of the anti-Islamic fringe.  The administration's public diplomacy team might want to get on that.