Accessibility links
High-Tech Holograms: 3-D With No Glasses Required Scientists have created a truly 3-D moving hologram image that viewers can walk around. The team was inspired by a scene in Star Wars when Princess Leia appears in a hologram. 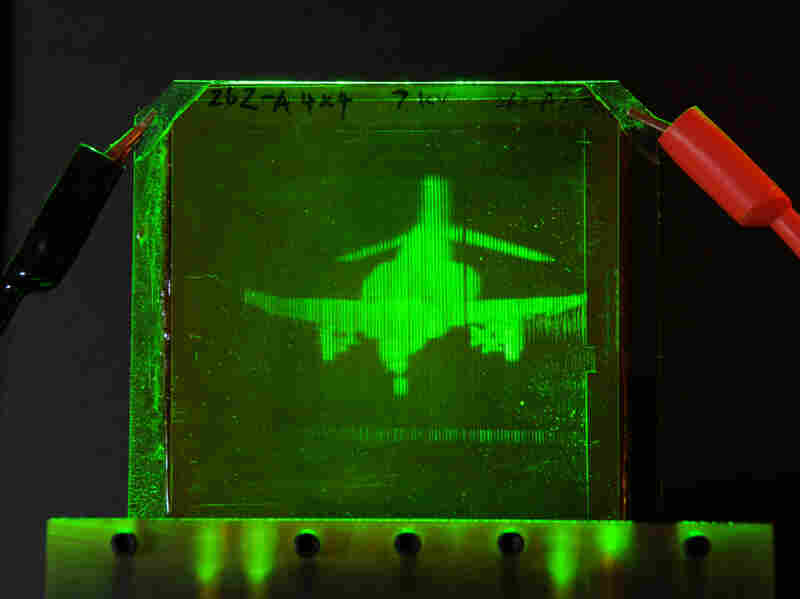 A holographic image of an F-4 Phantom Jet created on a photorefractive polymer screen. University of Arizona hide caption

This week, scientists in Arizona announced they've taken another step toward bringing a sci-fi mainstay to life: the hologram movie.

Unlike the Oscar-winning movie Avatar or animations from Pixar, a hologram movie would be truly three-dimensional. Viewers could actually walk around the image, as if it were a solid object.

"If you look at the object from different angles," says Nasser Peyghambarian, a professor of optics and engineering at the University of Arizona in Tucson, "you see different things because those are different perspectives of that object."

Funding for the research comes, in part, from the Defense Advanced Research Projects Agency and the Air Force. Peyghambarian says holograms could one day be useful for military training operations.

From Stereoscopes To Holograms

Before there was holographic stereography, there were stereoscopes, and then 3-D movies to tease the eye. In 3-D vision, "the mind feels its way into the very depths of the picture," wrote Oliver Wendell Holmes in The Atlantic Monthly in 1859. A few years earlier, he had designed his own stereoscope, one of the first devices to render images in 3-D. Indeed many non-scientists have been fascinated with stereopsis long before Star Wars or last year's epic Avatar revived its allure. According to the book Stereoscopic Cinema & The Origins Of 3-D Film, 1838-1952 by Ray Zone, Avatar had many, less glamorous predecessors. 3-D first reached large audiences as short, gimmicky films in the beginning of the 20th century. Early features in the 1920s included The Power of Love and M.A.R.S. or Radio-Mania. These old-school 3-D movies were made by projecting two color layers on top of each other. Later came Bwana Devil (1952) and Jaws 3-D (1983).

Of course, almost everyone with two working eyes sees the world in 3-D. Each eye sees things in a slightly different perspective, and the brain combines the two images to produce the extra depth of field. At the movies, the glasses with red and blue lenses separate the images and then the brain fuses the two together again. But in Avatar, the filming process that combines 3-D cartoons and humans is much more complex. Take a look at this article in Popular Science to see what it took.

But his main inspiration came straight out of Hollywood. Peyghambarian points to the scene in the movie Star Wars where a hologram of Princess Leia asks for help from Obi Wan Kenobi. "This has always been our goal," he says.

Key to this process was the development of a special, photorefractive polymer — essentially a transparent screen — that could display the image, then quickly erase it and refresh with a new image. Peyghambarian's team was able to project a hologram image that can refresh every two seconds.

To build the hologram, the team used 16 cameras that each captured a different perspective of a researcher sitting in the middle of a room. The images were collected by computer and sent to another lab, where the information was converted into a pulsed laser. A display system showed the person in 3-D, complete with his movements.

Peyghambarian says that in addition to Hollywood, holograms could play a part in hospitals, allowing doctors to perform surgery remotely, or in factories, where manufacturers could use them to design cars and airplanes.