Accessibility links
Sophie Crumb And Her Evolution Into A 'Crazy Artist' Sophie Crumb's parents, Robert Crumb and Aline Kominsky-Crumb, are well-known comic artists -- so it's no surprise that she found herself in the same profession. Her new book, Sophie Crumb: Evolution Of A Crazy Artist, is a collection of her drawings up to age 28. 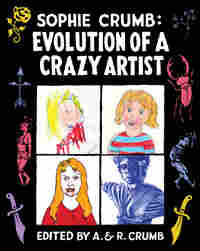 Sophie Crumb grew up in a family of artists -- her parents, Robert Crumb and Aline Kominsky-Crumb, are two of the most famous graphic artists in the world. So it's only natural that she found herself gravitating toward their profession as early as the age of 2.

Her new book, Sophie Crumb: Evolution Of A Crazy Artist, is a collection of her work up to age 28. ﻿She and her father tell NPR's Neal Conan about collaborating on her book and life in the Crumb household.

Sophie Crumb features a comprehensive collection of Sophie's drawings, and that was no accident.

"My dad is a compulsive archivist," she says. "He was into them, so I kind of did them to make him laugh."

Despite her parents' efforts to hide their work -- and fame -- from her, Sophie Crumb says she felt pressured to achieve like they had. She says she realized how important they were when she was a teenager, watching her father's fame grow.

But the Crumb parents didn't explicitly teach her to draw, it was just something she did for fun.

And Sophie branched out into other media as well.

"About age 6, 7 or 8, she started making these very fine cutouts of little paper dolls," Robert Crumb says. "It was amazing. It didn't take pushing."

He says he was surprised when she realized drawing didn't come as easily to other people, since she and her parents were so talented.

Sophie Crumb says for the book, she was far more interested in the psychological value of the collection than in the "tabloid-y" aspect.

"I'd rather it be seen as an interesting study of art and age and evolution from childhood to adulthood," she says.

The Crumbs say they realized long ago that the vastness of the collection is what makes it especially compelling.

"You can trace this evolution of her development through her drawings, and I'd never seen a book like that," Robert Crumb says. "If [an anonymous person] drew all the time like that from early childhood and it was all saved, [it would] be an interesting way to study their development."

Sophie Crumb admits it's a little embarrassing, but says, "That's part of my lot." And the same is true, she says, for anyone who draws about their own life.