Accessibility links
Microsoft's Kinect Brings Gestures To A New Level Microsoft is doing away with the game controller and relying instead on body motions detected by a camera. It's a concept that other competitors are also developing to enable people to control temperature, lighting and security devices in homes. 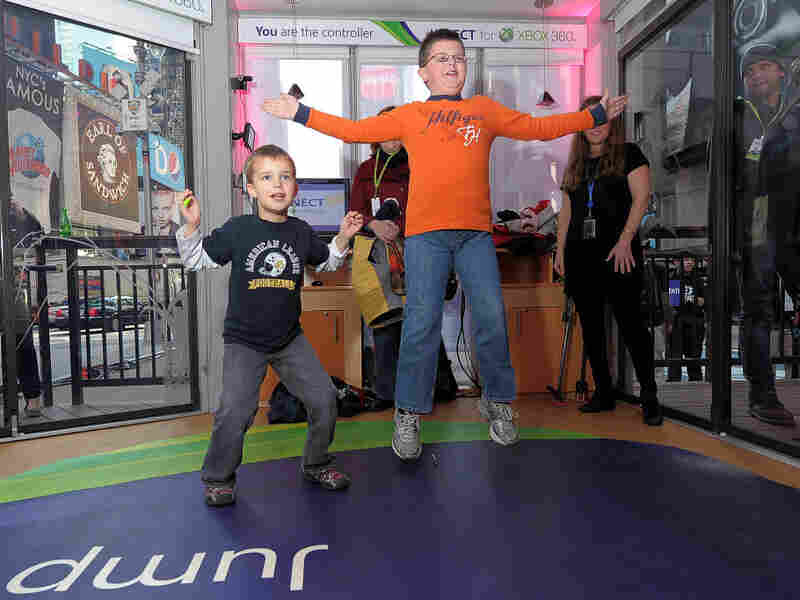 Kids play with the Kinect for Xbox 360 during a launch event in New York City. Michael Loccisano/Getty Images hide caption

The Wii revolutionized video games with its motion-sensitive controller. Now, Microsoft has one-upped Nintendo by getting rid of the controller completely.

The Kinect, out in stores Thursday, attaches to the Xbox 360 video game console and lets you play games using only your arms, legs and body. But, the technology is about more than fun and games.

Getting Off The Couch

I tried Kinect and it definitely got me off the couch. A game called 20,000 Leaks had me underwater in a virtual glass tank contorting my body to plug leaks. As I moved my body, my avatar followed along.

"What it does is it takes the controller that you normally hold in your hands out of the picture entirely," says Microsoft's Shannon Loftis, who was part of the team that developed Kinect.

"The idea is really that you are up -- you're off the couch," she says. "You're using your whole body to play and getting a great workout and having a lot of fun while you're doing it."

Kinect takes advantage of its lack of controller to give full exercise classes. I was guided through some Tai Chi by a virtual instructor.

Kinect let me know if my arms weren't positioned quite right; instructions came up on the screen to guide me into the correct posture.

Smile, You're On Camera

Kinect is a boxy device with a special camera that attaches to the Xbox 360. Loftis says the camera also uses facial recognition software.

"I've created what is called a Kinect ID," she says. "So when I walk into the field of view of the sensor it recognizes me and it brings up my avatar and my profile."

Loftis can also talk to Kinect. First, she uses gestures to bring up a movie she's been watching called Date Night.

If Loftis wants to see a different scene she doesn't have to go searching for the remote. She just tells Kinect to fast forward. If she wants it to move faster she just says the word.

Using Kinect reminded me of science fiction. In particular, the popular 2002 film Minority Report with Tom Cruise where he sits in front of a large computer screen and flips through video clips with a wave of his hand.

That vision from science fiction is what drove technology visionaries like Bill Gates when he founded Microsoft, says technology analyst Roger Kay, the founder of Endpoint Technologies Associates.

"Basically, he just unleashed voice recognition and gesture and touch and handwriting recognition and basically all the technologies," says Kay. "There are technical groups at Microsoft working on all those problems."

Gesturing In Your Home

But, Gates isn't the only one who's had this vision. Among Microsoft's competitors is a Belgian-based company called Softkinetic.

CEO Michel Tombroff says his company is working on getting its cameras to do all kinds of tasks including controlling the temperature, lighting and security devices in a home.

"You'll be able to do that in the hall in the living room by just doing specific gestures that will be recognized by the cameras embedded into your living room," he says.

Although Softkinetic is a Microsoft competitor, Tombroff says, the publicity around Kinect is opening doors for his company that were previously closed.

"People come back to us and say, 'Well, you were right. Now we see the benefit. We see that companies in the consumer electronics market will adopt this technology. Let's move on,'" he says.

But standing on the shoulders of Microsoft could be risky. Kay, the technology analyst, thinks consumers might not be so happy to pay another $150 for Kinect on top of the $300 they already laid out for their Xbox 360.

Consumers will also want a lot of game choices, he says, and developers will make more gesture-based games only if a lot of people buy Kinect.

"Everyone else has to accept it for it to become a standard," Kay says. "Basically, other people have to say, 'I'd like to enable gestures in my world,' and all the programmers have to go in that direction."

Even if Microsoft doesn't succeed this time, Kay says, the technology has reached the point where it's clearly possible to have a more natural interaction with a computer.

But people have been talking about getting rid of the mouse, the keyboard and the controller for years. It still may be a little too soon to throw them all into the recycling bin.