Accessibility links
Midterm Losses Bite Blue Dog Democrats Conservative and centrist Democrats were defeated in the House in large numbers this week. Especially hard-hit was the Blue Dog Coalition -- only 23 of its 54 members were re-elected, and it lost two of its leaders, Stephanie Herseth Sandlin of South Dakota and Baron Hill of Indiana. 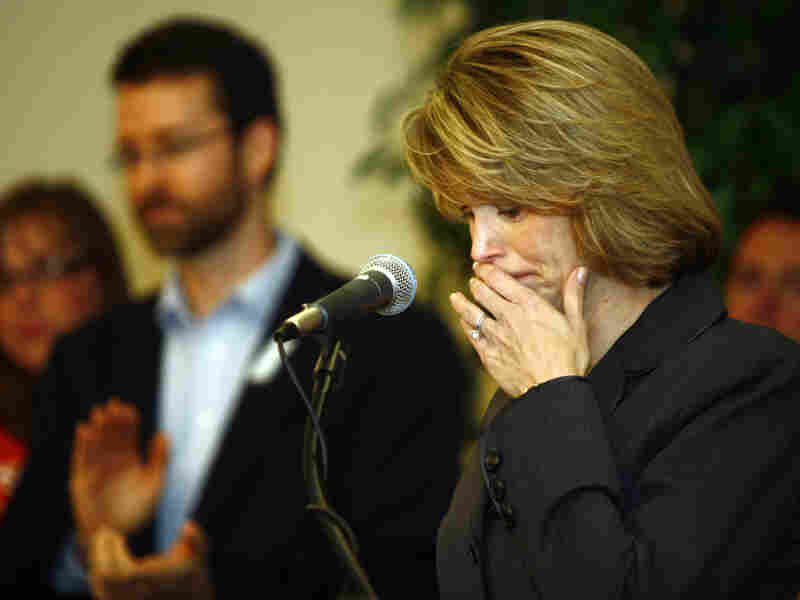 Stephanie Herseth Sandlin gets choked up during her concession speech Tuesday in Sioux Falls, S.D. Herseth Sandlin was a leader of the Blue Dog Coalition in the House, which suffered big losses in Tuesday's elections. Devin Wagner/Argus Leader/AP hide caption

Congress shifted to the right with the elections of several Tea Party Republicans this week -- but the rightward trend wasn't enough to save a number of conservative and centrist Democrats, who were defeated in the House in large numbers.

Especially hard-hit was the Blue Dog Coalition -- only 23 of its 54 members were re-elected, and it lost two of its leaders, Stephanie Herseth Sandlin of South Dakota and Baron Hill of Indiana.

"It's a caucus now that doesn't have the clout that it once had," NPR's Debbie Elliott tells Scott Simon.

Fiscal conservatism is a big issue for the Blue Dog Democrats, who generally come from what would be considered swing districts. "In the past two election cycles, Democrats really reached out to them and helped really make gains in some areas that were very red -- and we saw that reversed," Elliott says.

The Blue Dogs have blamed the nationalization of Tuesday's elections for their downfall. Some of them had tried to distance themselves from the Democratic agenda and House Speaker Nancy Pelosi -- "but it just wasn't enough."

However, "talking with voters in some of those districts, it was a little bit trickier," Elliott says. "They were frustrated, I think, seeing how, on one hand, you stand up and you say, 'I voted against health care,' but there are some Democrats in your district who might have wanted to see you vote for health care. So there was this tricky line they were trying to walk."

The defeat of many Blue Dogs leaves white Southern Democrats without much of a voice -- but the Progressive Caucus, which retained nearly all its members, will likely gain clout.

The Blue Dog Coalition in the House was reduced by about half during Tuesday's elections. Of the 54 Democrats, 23 were re-elected, with three races still to be called as of Friday afternoon. The Republicans made 28 pickups -- by defeating incumbents and, in a few cases, winning races in which the incumbent didn't seek re-election.