Accessibility links
Drugs Enter U.S. By Truck, Free Trade And Chance Commercial trucks are becoming the preferred way to smuggle drugs across the U.S.-Mexico border, the Department of Homeland Security says. Each day, 4,500 trucks cross the World Trade Bridge in Laredo, Texas, but customs agents only inspect 1 in 5. From there, via Interstate 35, it's a straight shot to America's heartland. 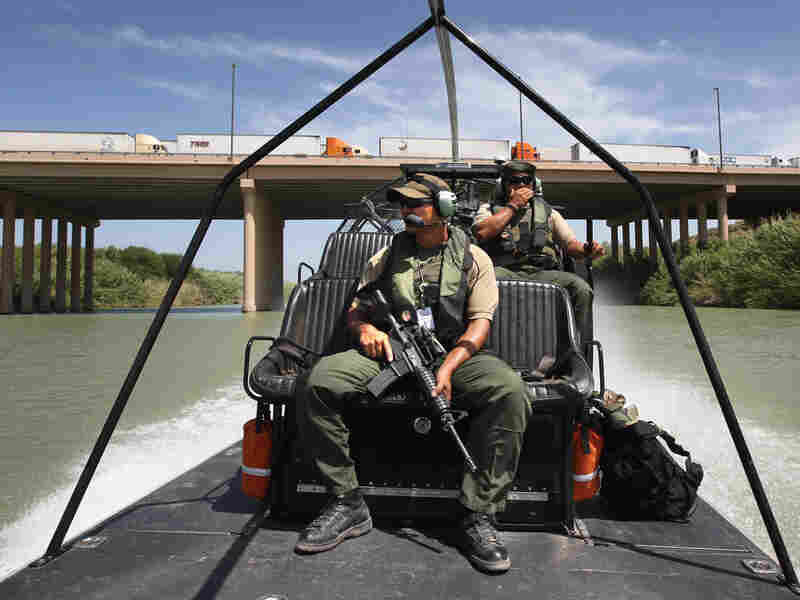 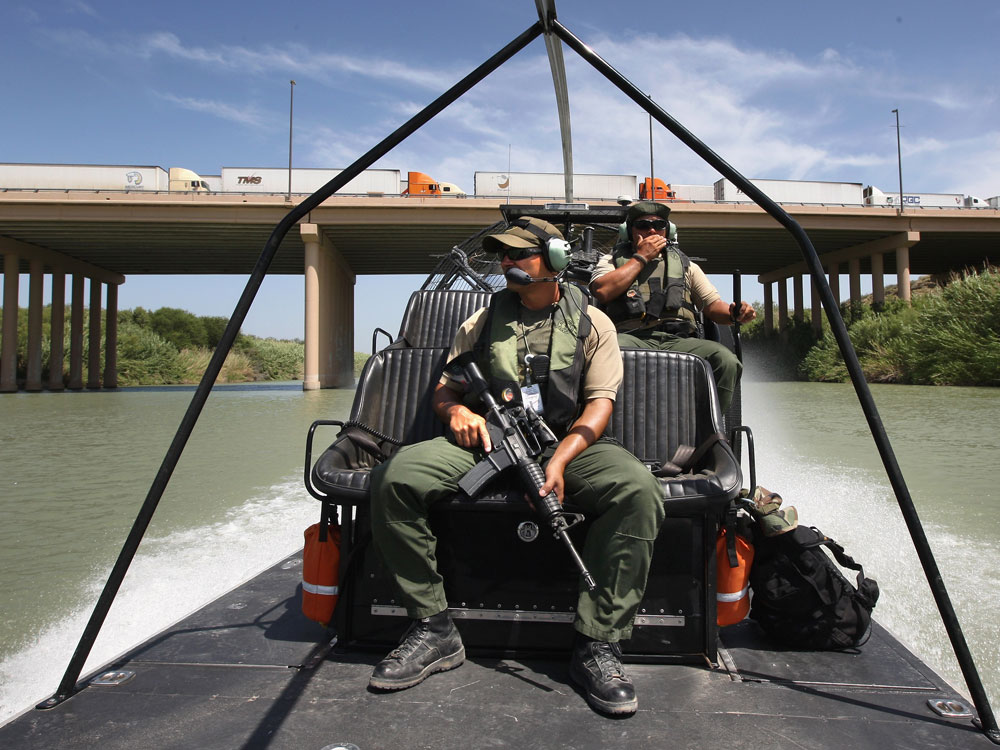 At the core of the grisly Mexican cartel war, traffickers are fighting over border crossings, the gateways to the world's richest illegal drug market.

In Nuevo Laredo, Mexico, the Gulf Cartel is battling the Zetas for control of the plaza, whose prize is the World Trade Bridge, the biggest commercial port on the southwest border. Each day, 4,800 trucks cross the bridge. That's one truck every 15 seconds. From there, via Interstate 35, it's a straight shot to America's drug-loving heartland.

"By far, not only is it the busiest in the amount of trucks, but it is also the busiest in the narcotics that are seized here each year," says Gene Garza, the longtime Laredo port director for Customs and Border Protection. "We get a lot of tile shipments where we find drugs. We get a lot of furniture with marijuana loads out of [the central-western Mexican state of] Jalisco."

According to the Texas Department of Transportation, 13 out of the total 27 border crossings between Texas and Mexico allow commercial traffic, including the World Trade Bridge and the Bridge of the Americas. Both bridges also have dedicated "Free and Secure Trade (FAST) lanes" for trucks carrying commercial products pre-certified by the U.S. Customs and Border Protection's Customs-Trade Partnership Against Terrorism (C-TPAT) program.

Truck traffic through Laredo has tripled since the North American Free Trade Agreement (NAFTA) came into force 16 years ago. If customs inspectors examined every truck, it would cripple free trade. Instead, one out of every five trucks is unloaded and inspected. So drug traffickers play the numbers game.

"They're probably thinking ... 'My truck is not gonna get examined. We're gonna go through Laredo to see if we can get through,'" Garza says.

This fiscal year, more than 4.7 million commercial trucks crossed into the U.S. from Mexico. According to the Department of Homeland Security, agents seized 96 tons of marijuana from trucks at southwest ports of entry in 2010, more than twice as much as in 2006. Officials say tougher enforcement in the lonesome stretches between border towns is funneling more contraband through these busy border crossings.

'First Thing You Look At Is Their Hands' 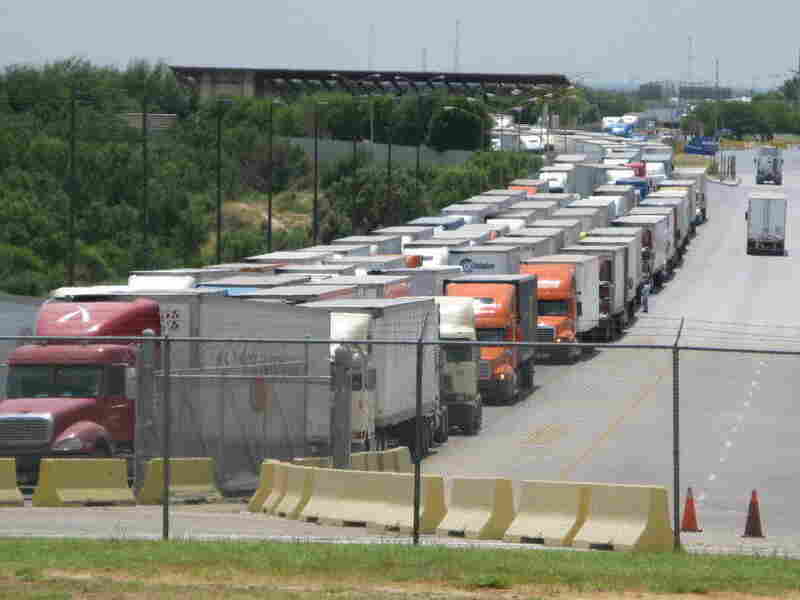 An average of 4,800 trucks a day cross from Mexico to Laredo, Texas, on the World Trade Bridge, the biggest commercial port along Texas' southwest border John Burnett/NPR hide caption 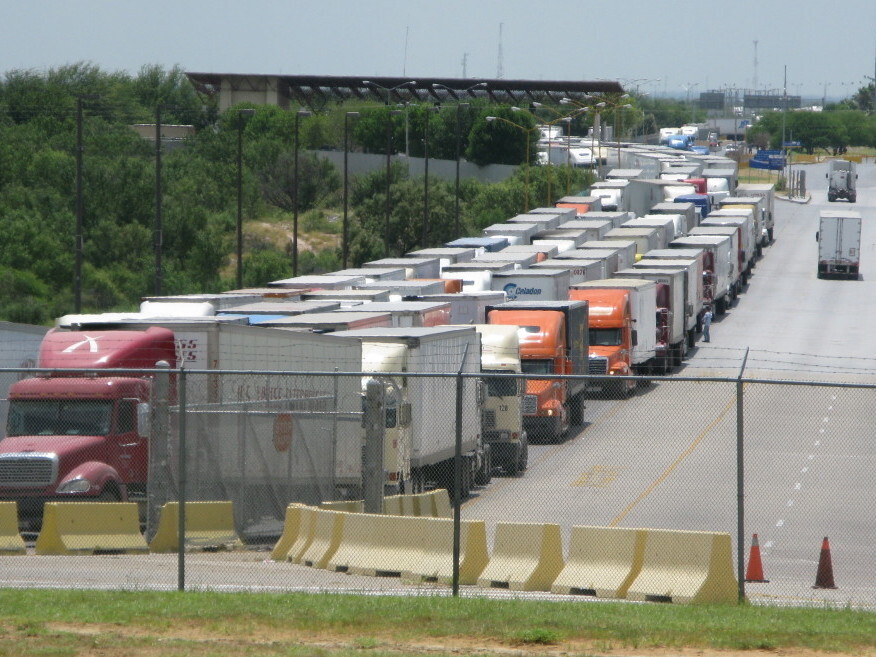 An average of 4,800 trucks a day cross from Mexico to Laredo, Texas, on the World Trade Bridge, the biggest commercial port along Texas' southwest border

Customs and Border Protection officer Lawrence Madrid screens trucks all day at the Bridge of the Americas in El Paso, Texas. He quizzes the grizzled driver of a white Freightliner truck hauling vehicle electrical systems.

"Buenos días, buddy. Where are you going?" Madrid asks in Spanish.

The driver answers he's headed to a warehouse in Laredo.

"And what are you carrying?"

Madrid watches him carefully throughout their exchange. "When they're handing you the documentation, first thing you look at is their hands, whether they're trembling," the agent says, "Whether they ... take time to answer the questions or that they're stuttering when they answer -- just stuff like that you pick up."

Sometimes drivers are paid to haul dope that they know is hidden in their cargo. In 2010, Mexican truckers accounted for 78 percent of all security breaches to the U.S. customs' program that expedites cargo shipped by companies with pre-approved security plans. But sometimes the drivers are clueless. 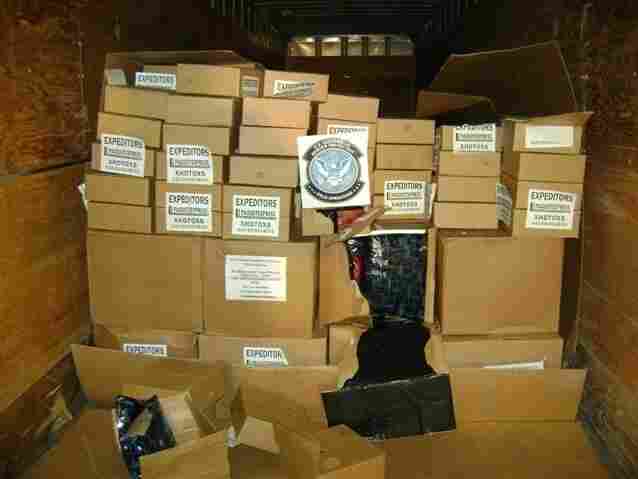 A ton and a half of marijuana was discovered in a truck at the El Paso port of entry last year, part of the 109 tons of pot seized from 18-wheelers on the southwest U.S.-Mexico border in 2009. Courtesy of U.S. Customs and Border Protection hide caption

A Mexican trucker who gives his name as Andres sits in the cab of a black Kenworth idling at a truck stop in Nuevo Laredo, about to haul a load of blackberries across the bridge.

"First, you have to stay very close to your truck," he says. "Don't leave it alone, because in an unguarded moment when you leave to go buy some food, someone can put a package in there. It doesn't take long for them to do that. That's why I'm sitting right here in my truck, keeping an eye on things."

With the economic power to corrupt almost anyone who is useful to them, drug mafias have also gained access to shipping departments inside export plants.

"We've seen it at the manufacturer," says Jerry Robinette, special agent in charge of investigations at the San Antonio office of U.S. Immigrations and Customs Enforcement. "Many of these [drug-smuggling] organizations will go out and buy a business so that there's at least records of legitimate transactions, legitimate importations or exportations. And then [they] gradually utilize those companies to smuggle either contraband north or proceeds southbound into Mexico."

It is costly and time-consuming for a company to get certified under the U.S. government's expedited trade program. For that reason most export plants do not want to jeopardize that relationship with a drug bust, says Alberto Islas, a Mexican industrial security consultant who advises maquilas, the export-oriented Mexican assembly plants along the border that make everything from auto parts to laptops.

The threat of organized crime going into maquilas is a constant threat. It was something we didn't see five or 10 years ago.

"The threat of organized crime going into maquilas is a constant threat. It was something we didn't see five or 10 years ago," Islas says.

A case in point: A man named "Eduardo," who has requested anonymity because of safety concerns, owns a private security company in a Mexican border city, where he is hired by maquilas to make sure their U.S.-bound loads are clean. He is a former Mexican police official who boasts a long list of industrial clients, which he showed to prove his authenticity. Eduardo says he is speaking out because he's fed up.

"It's horrible," he says. "You feel super impotent when you can't do anything. Unfortunately, organized crime affects everything. Even companies you thought were clean."

Eduardo says he recently discovered that a large company that was certified by U.S. customs was passing drugs into the U.S. According to Eduardo, drug traffickers paid a manager in the company $50 to $100 per pound of marijuana that successfully made it across the border. 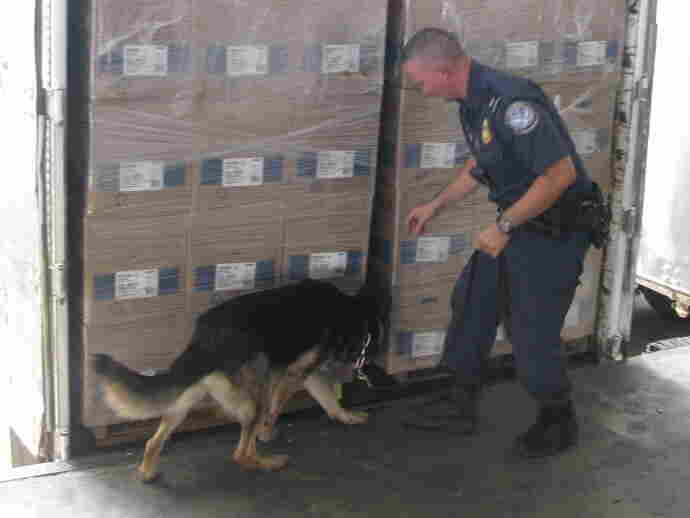 A federal agent and his canine look for drugs in a load of cargo at the World Trade Bridge in Laredo, Texas. John Burnett/NPR hide caption

What is startling about his allegation is that it happened at a well-known company that is certified under the Customs-Trade Partnership Against Terrorism (C-TPAT). Under the U.S.-administered program, a Mexican exporter submits its personnel and security procedures to thorough checking by U.S. Customs, and once they are satisfied, the cargo enjoys expedited transit through U.S. ports of entry.

Eduardo says he saw evidence that company managers had smuggled marijuana in at least two trucks past his dogs and his men. Alarmed, he says he alerted his client and U.S. customs officials to the discovery, but nothing happened.

"It's assumed we have a contract to check the cargo inside the plant," Eduardo says. "They pay us to do that, but they never call us to enter the plant. We only check the trucks they send us. If a U.S. customs agent asks to see the company's paperwork, they'll show him they have a contract with us. But the contract doesn't reflect the reality."

He adds that he believes few exporters subvert the C-TPAT program, and he plans to let his contract expire with the company in question.

Brad Skinner, head of C-TPAT at the Department of Homeland Security, says he is not aware of Eduardo's story.

"We have no direct, corroborated information that any particular drug trafficking organization is specifically targeting the C-TPAT shipments," Skinner says. "Where we know of an incident where a C-TPAT member was involved, we'll take action to suspend those members."

According to Skinner, the ports of entry are more secure than they've ever been, bolstered by devices such as X-ray machines and radiation monitors.

A Billion Dollars Worth Of Cargo

More On The U.S.-Mexico Border

At the inspection dock at Laredo's World Trade Bridge, port director Garza shows off all the security measures they employ.

"We have the contraband enforcement team officers working there. We have the canines working there. There's a lot of looking at the merchandise. [There are] a lot of people that go into the trailer," he explains as inspectors in blue uniforms use forklifts to remove pallets from the cavernous trailers.

Once a drug-sniffing dog checks them out, the goods can be reloaded and begin their journey northward.

"The peanuts are going to Minneapolis, Minnesota. The Nivea skin cream is going to Norwalk, Conn., and the air conditioners are going to Lenexa, Kan.," Garza says, checking manifests on a clipboard.

With a billion dollars worth of cargo crossing the U.S.-Mexico border every day, free trade is one of the greatest gifts for drug traffickers.