Accessibility links
Gulf Oil Spill Investigation 'High Priority' For Justice Over the past several months, senior Justice Department officials have visited the Gulf to examine critical pieces of evidence. Some legal experts wonder whether, in addition to possible criminal charges against the companies involved, the department may also prosecute individuals. 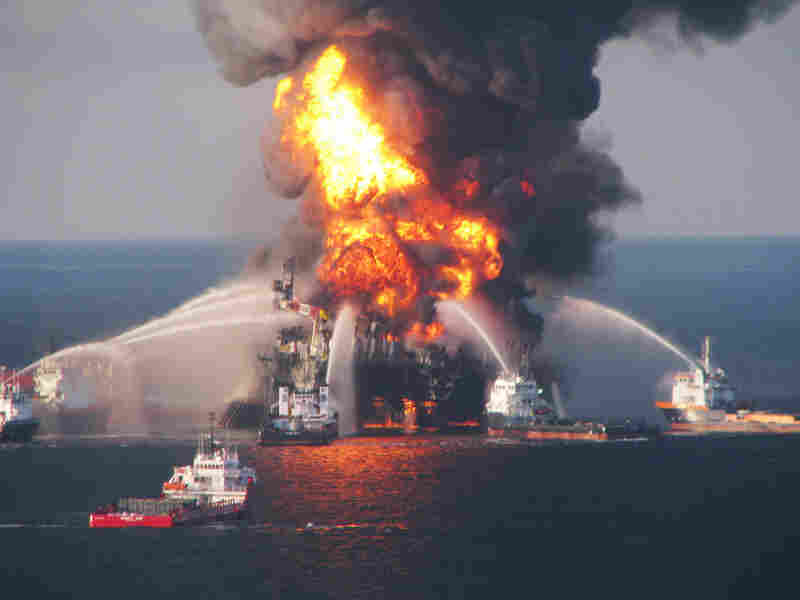 As part of the U.S. Justice Department's investigation into the Deepwater Horizon explosion in the Gulf of Mexico, a federal judge in New Orleans recently created a security zone around the collapsed rig, the legal equivalent of taking yellow police tape and draping it around the watery crime scene.

Although the investigation is happening below the surface, there's a lot going on at the Justice Department.

"This investigation is a very high priority for the Department of Justice, and so senior officials up to the top ... are very involved," said Gary Grindler, acting deputy attorney general.

Over the past several months, Grindler, Attorney General Eric Holder and other senior Justice Department officials visited the Gulf to look at critical pieces of evidence, such as the four-story-high blowout preventer.

"A tremendous number of resources are being devoted to this," Grindler said. "There are at least 40 attorneys that are involved in both the civil division and the criminal side of the house.

"We have U.S. attorneys' offices along the Gulf that have been affected that are actively involved."

This investigation could be a long haul. The Justice Department has leased office space across the street from the courthouse in New Orleans, inside which prosecutors are going through documents and building a case. Grindler spoke in general terms and was careful not to offer details about the criminal probe

If the Justice Department decides that there are individuals who should be charged, it's very likely that they would contest the charges, because they could go to jail.

But David Uhlmann, a former environmental crimes prosecutor who now teaches at the University of Michigan Law School, is closely following the oil spill investigation.

Uhlmann says criminal charges against BP and Transocean, which operated the rig, could be a foregone conclusion. The only real issue, he says, is how much the companies will pay to settle allegations they released oil into the Gulf.

Uhlmann says he thinks charges are likely against Halliburton, too, after a presidential commission found the company may have used faulty cement to seal the well.

Investigators are also looking at the big picture, the corporate culture at BP and other safety lapses to determine how they may have foreshadowed the rig disaster.

"The really big question mark is what will happen with individuals," Uhlmann said. "If the Justice Department decides that there are individuals who should be charged, it's very likely that they would contest the charges, because they could go to jail."

Jane Barrett, a former prosecutor who now teaches at the University of Maryland, has studied environmental cases over the past decade.

"In the last 10 years, what we've seen is a tendency just to go with the corporate plea," Barrett said. "And in particular. the individuals that get charged are those who are affiliated with, not with your Fortune 200 companies, but smaller companies."

Barrett says individual employees involved in the oil spill deserve a close look from prosecutors. But it can be difficult to prove any one employee knows enough about safety problems to become the target of criminal charges. The Justice Department, for instance, never charged the captain of the Exxon Valdez with wrongdoing after that disaster in which crude oil was spilled in Prince William Sound, Alaska.

The new Justice Department investigation could be complicated by another factor: Some of the managers on the oil rig already are invoking their rights to remain silent.

But Grindler, the Justice Department's second in command, said that authorities haven't ruled anything out and that they are considering every legal tool at their disposal, including looking at violations of the Clean Water Act, the Oil Pollution Act, the Migratory Bird Act and the Endangered Species Act.

And there's another law, too, experts say: the Seaman's Manslaughter Statute from the 1800s. Unlike most environmental laws, the seaman's statute allows the government to bring felony charges if it can prove workers onboard a vessel, like the oil rig, die because of neglect from the ship captain or ship owner.

In all, 11 men died after the explosion on the Deepwater Horizon. Prosecutors are keeping the life rafts as evidence.

As for the crime scene security zone in the Gulf of Mexico, the judge said no one is supposed to touch it until October 2011, giving the Justice Department at least another year to plug away at its huge investigation.