Accessibility links
'The Anthology Of Rap': Lyrics As Poetry Now almost 40 years old, rap burst out of the Bronx to become one of the dominant musical and cultural forces in this country.  A new book, called The Anthology of Rap, tracks the development of the genre from New York house parties to Eminem and Jay-Z. 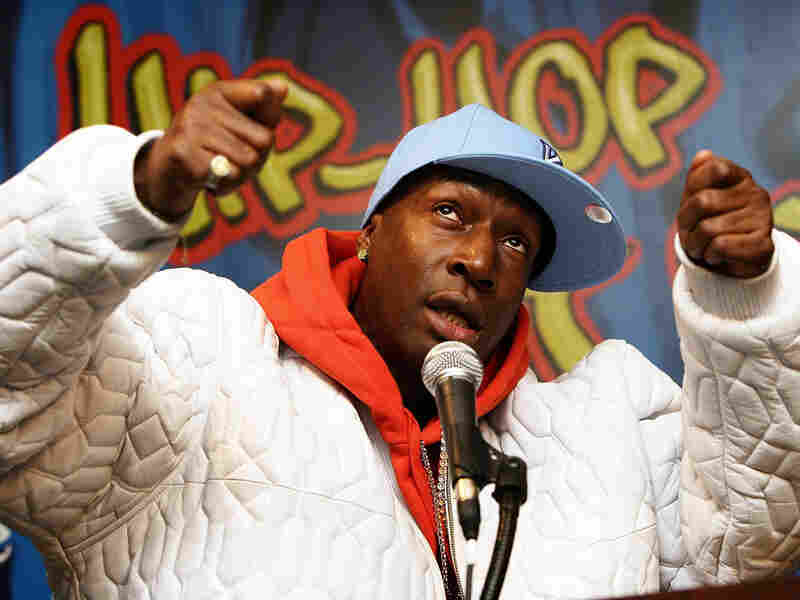 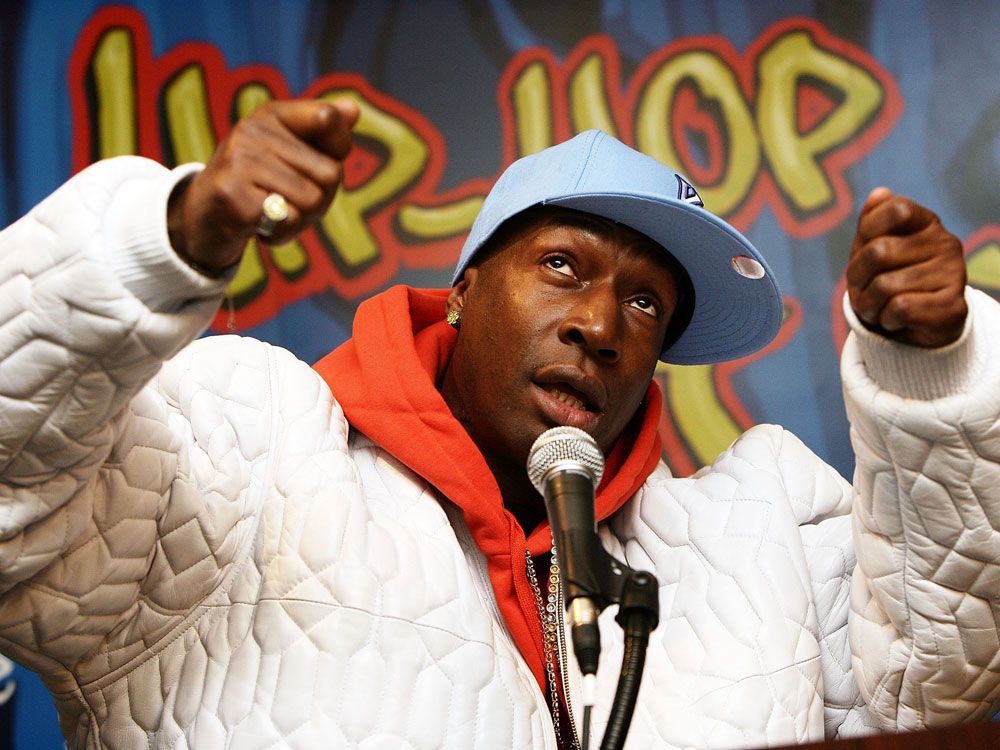 Now almost 40 years old, rap burst out of the Bronx to become one of the dominant musical and cultural forces in this country.  A new book, The Anthology of Rap, tracks the development of the genre -- from New York house parties to Eminem and Jay-Z -- by presenting lyrics from some of America’s greatest rappers as poetry. Adam Bradley, co-editor of the book, tells Weekend All Things Considered host Guy Raz that rap's origins had no words at all.

"Before there was rapping, there was DJing," Bradley says. "A DJ would be at a party playing songs and focusing on the breaks, those most exciting, energizing drum sequences, and running those back and forth to get the dancers excited. Then they had to do something on the microphone to keep people's attention ... so what developed out of DJing was the very concept of MCing: putting words in rhyme to the music."

Some of the earliest rappers began as DJs, Bradley says.

"Eddie Cheeba, DJ Hollywood, even Grandmaster Caz of the Cold Crush Brothers ... these are people who started often as DJs and then made the transition into the lyrical art."

Listening To Rap For The First Time, With A Book Critic

In the book, Bradley traces many of the classic rhymes to DJ Eddie Cheeba.

"The great Chuck D of Public Enemy once said about Eddie Cheeba that he was as important to hip-hop as Ike Turner was to rock 'n' roll. You go into the lyrics and you can see just that," Bradley says. "Think about a phrase that's become really a part of the popular idiom, something like, 'Wave your hands in the air.' This is Eddie Cheeba in 1979. This is part of an oral tradition that stretches much further back than the actual history of recorded hip-hop."

The first mainstream hip-hop hit was "Rapper's Delight" by the Sugarhill Gang. The lyrics to that song, Bradley says, are about the art form itself.

"When he gets to the verse, he says, 'Now what you hear is not a test, I'm rapping to the beat' ... it's written about its stanza!"

A little while later, Grandmaster Flash and the Furious Five released a song that would change the direction of hip-hop forever.

"'The Message' really was a kind of turn in hip-hop -- it was a turn towards social consciousness," Bradley says. "It looked at the world around these folks and talked about their realities. ...

"Rap has always been about these tensions, the tension between the party and the profit, between the sense of social responsibility, but also the need to rock the crowd ... to make people think and move their feet. Rap is all of these things at once, and it's still that way today."

Excerpt: The Anthology Of Rap

The Anthology of Rap is the first anthology of lyrics representing rap’s recorded history from the late 1970s to the present. It tells the story of rap as lyric poetry. The lyrics included stretch from a transcription of a 1978 live performance by Grandmaster Flash and (the then) Furious Four to the latest poetic innovations of Jay-Z, Mos Def, Jean Grae, and Lupe Fiasco. The anthology’s purpose is threefold: (1) to distill, convey, and preserve rap’s poetic tradition within the context of African American oral culture and the Western poetic heritage; (2) to establish a wide and inclusive cultural history of rap on the grounds of its fundamental literary and artistic nature; and (3) to provide tools with which to read rap lyrics with close attention.

Rap and hip-hop are not synonymous, though they are so closely associated that some use the terms interchangeably. Others invest them with distinct values—either rap describes commercialized music and hip-hop the sounds of the underground; or rap suggests a gritty style (as in gangsta rap) and hip-hop a more politically and socially conscious approach (as in backpack hip-hop). At the end of his song “HipHop Knowledge,” legendary rap artist and producer KRS-One succinctly explains the distinction: “Rap music is something we do, but hip hop is something we live.” Hip-hop, in other words, is an umbrella term to describe the multifaceted culture of which rap is but a part. MCs, hip-hop’s masters of ceremonies, are its literary artists. They are the poets, and rap is the poetry of hip-hop culture.

Hip-hop emerged out of the impoverished South Bronx in the mid-1970s. In defiance of circumstance, a generation of young people—mostly black and brown—crafted a rich culture of words and song, of art and movement. Rap was the voice of this culture, the linguistic analog of hyperkinetic dance moves, vividly painted subway cars, and skillfully mixed break beats. “Rap was the final conclusion of a generation of creative people oppressed with the reality of lack,” KRS-One explains. Hip-hop’s pioneers fashioned in rap an art form that draws not only from the folk idioms of the African diaspora but from the legacy of Western verse and the musical traditions of jazz, blues, funk, gospel, and reggae. These young artists commandeered the English language, bending it to their own expressive purposes. Over time, the poetry they set to beats would command the ears of their block, their borough, their nation, and eventually the world.

Rap today bears the legacy of this inaugural generation and, as a consequence, is rightly associated with African American culture. Equally, it is a form of expression governed by a set of conventions available to all and vivified by the creativity of anyone who learns rap’s history and masters rap’s craft. This helps explain how rap—and hip-hop culture in general—has come to be embraced by people of all races and nations. It is now the lingua franca of global youth culture, varied in its expressions but rooted in a common past.

At the same time, rap has inspired heated debate concerning its explicit speech and subjects. For some, rap constitutes a chorus of welcome voices, previously suppressed; for others, it presents a troubling sign of cultural disarray. Beyond its controversy, however, a hip-hop lyrical tradition has taken shape through poetic gestures and forms that rappers developed over time. The substantial body of literature that has emerged is both related to and distinct from the poetry of the past. In the past thirty years rap has led a renaissance of the word, driving a return to poetry in public life.

Though rap is now widely disseminated in American culture, it has yet to attain adequate recognition as poetry even as universities incorporate it into English, African American studies, and music curricula. Only a few poetry anthologies contain rap lyrics. Those that do, like the Norton Anthology of African American Literature and Ishmael Reed’s From Totems to Hip Hop, do so in a representative fashion. Books like Flocabulary’s Shakespeare Is Hip Hop and Alan Sitomer and Michael Cirelli’s Hip Hop Poetry and the Classics offer effective and entertaining tools for using rap to teach canonical poetry to middle school and high school students, but don’t illuminate rap’s distinct poetic tradition.

This volume treats rap as a body of lyrics that responds to transcription, explication, and analysis as poetry. The lyrics included offer a kind of laboratory of language for those interested in the principles of poetics. Indeed, the study of rap is an effective means of introducing the key forms and concepts that define the poetic tradition: rappers embrace the clear sonic qualities of rhythm and rhyme, make ample use of figures and forms such as simile and metaphor, make storytelling a key component of their art, and emphasize the spirit of competition once central to poetry.

Just as any body of poetry can be studied from many angles, so too can rap. Viable approaches to the aesthetics of rap abound. From a formal perspective, one might look at a song’s rhetorical figures, at its local sonic qualities, or at its revisions of conventions of genre. An interest in cultural studies will likely lead one to situate rap in relation to its sociological, geographical, or racial contexts. A range of historical approaches seems relevant in considering rap as an art, whether that means focusing on a song’s relationship to African American oral poetry of the distant or recent past, or to English-language lyric poetry from Beowulf until now, or to the vast range of commercial popular song lyrics in general—all bodies of poetry with rich and various histories, of which rap is also a part. As the lyrics in this book attest, rap has been and remains many things for many people; perhaps the wisest approach is one as capacious as the art form itself.

Excerpted from The Anthology of Rap

©2010 by Adam Bradley and Andrew DuBois