Accessibility links
A Muggle's Dream: Quidditch As A NCAA Sport Several prestigious universities are registered for the Quidditch World Cup next weekend and count the sport among their extracurricular activities. Not bad for a game that just a few years ago existed only in the pages of the Harry Potter books. 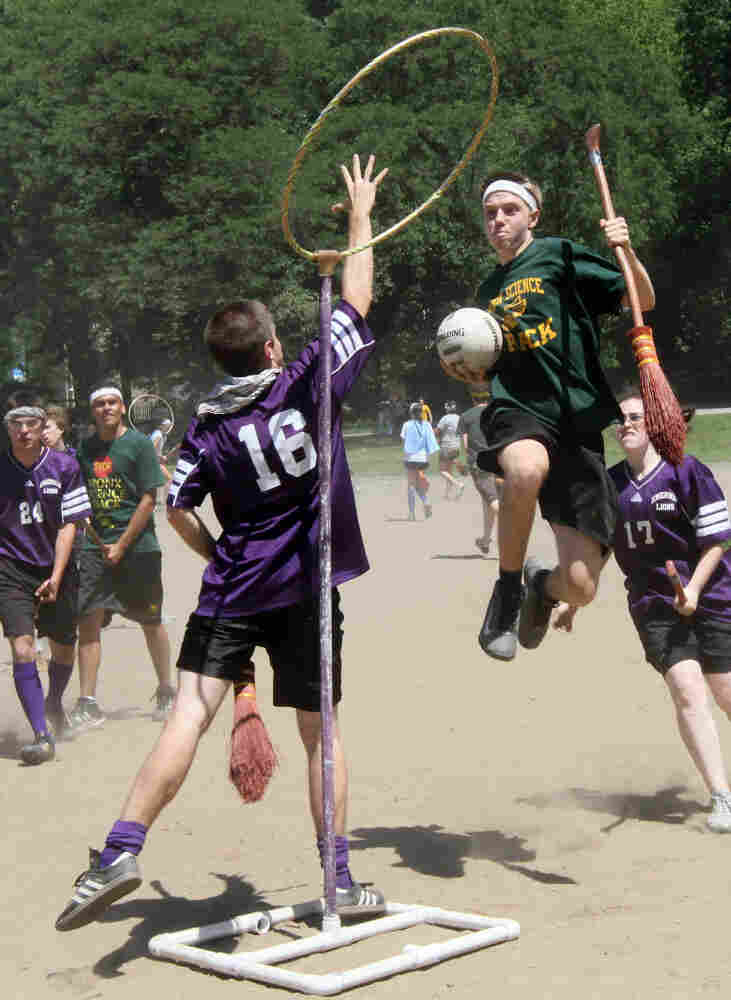 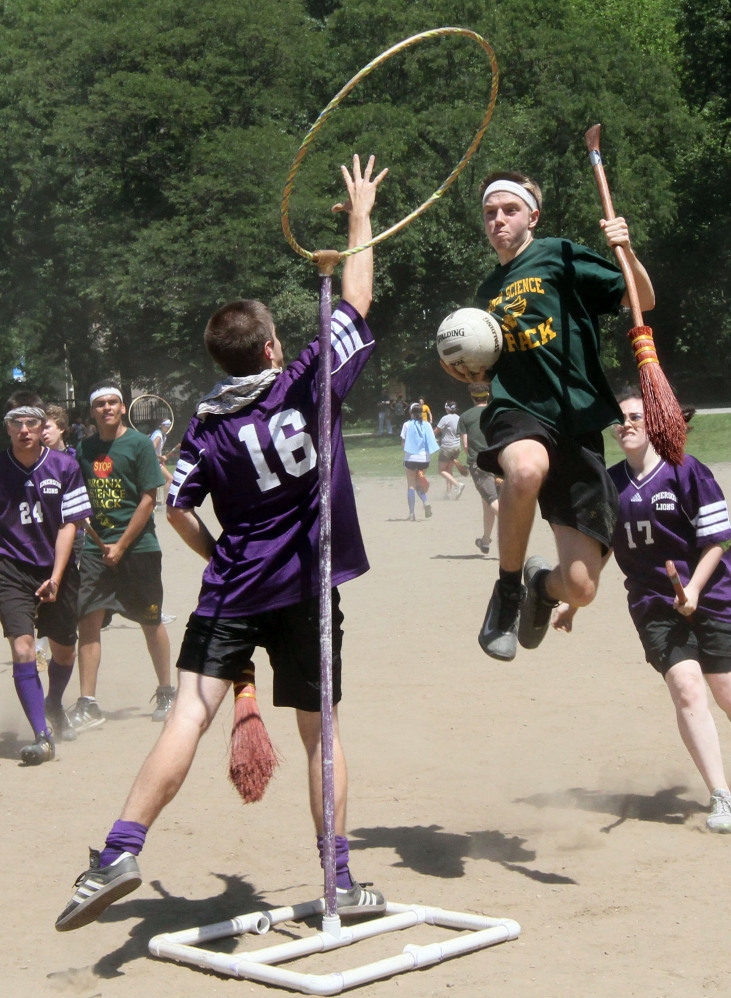 Quidditch, the game popularized by the Harry Potter series, is gaining more and more players.

A Quick Guide To Playing Quidditch

Alex Benepe wrote the rule book on playing the fantastical game from the Harry Potter series. Here are the basics of play.

Quidditch is played on an elliptical field. Two teams of seven players armed with brooms each take either side of the field. Three hoops on each side of the field serve as goals. Teams score points by throwing the "quaffle" (Benepe uses a volleyball) through the hoops.

Each team has three "chasers." "They're the offense," Benepe says. "They're the ones moving the ball down the field and shooting it through the hoops to score."

Two players on each team are "beaters." Benepe explains that "in the books, they have sticks or paddles, and they try to swat these malevolent balls called 'bludgers' at their opponents. To simplify it in real life," he says, "we just use dodgeballs."

If you get hit by a dodgeball, you have to drop any ball you may be holding, be it bludger or quaffle, and run back to your team's hoops before resuming play. "It's sort of like you get knocked out," Benepe says.

There's also a position called a "seeker." Their job is to chase the "snitch." The snitch, otherwise known as the "Snitch Runner," is a guy with a sock hanging out of the back of his shorts. According to the official IQA rule book, "The Snitch Runner evades both Seekers at all costs, doing everything he can do to prevent the Snitch from being caught."

The last position on the team is the "keeper." "Their job is just to defend the hoops," Benepe says.

Read The Full Rule Book From The IQA (PDF)

Next weekend, more than 60 different teams from high schools and universities across the country are expected to gather at De Witt Clinton Park in New York City for the fourth annual Quidditch World Cup.

Harvard University, M.I.T, Yale, Penn State, Duke -- several prestigious universities are registered for the World Cup and count quidditch among their extracurricular activities. Not bad for a game that just a few years ago existed only in the pages of the Harry Potter series.

She's waging a long-shot campaign for recognition from the National Collegiate Athletic Association.

"I think that having NCAA status will give it a little more credibility and help keep it around a little bit longer," Fischman says. "I'm hoping that it stays around after the Harry Potter generation leaves college."

Fischman originally joined the team because she was a huge Harry Potter fan, not because she was particularly interested in playing a sport. Now she's a chaser on the University of Maryland team and also serves as its co-vice president.

Quidditch players have to thread several other hoops to make theirs an NCAA sport. There must be official quidditch clubs at a minimum of 50 colleges across the country. Then, athletic directors from those colleges must individually petition the NCAA. It's a process that could take years -- if it happens at all.

Fischman admits it's not an easy task. She's hoping for help from her university's athletic department -- as well as the International Quidditch Association.

How Did Quidditch Get An International Association?

As a real-life physical game, quidditch has been around since 2005, when Middlebury College students Alex Benepe and Alexander Manshel first began playing the game at their school.

Wearing towels as capes and staking up hula hoops for goals, Benepe and Manshel used the Harry Potter series as their guide for creating the game. Soon, trotting around on brooms while trying to whip a "quaffle" through a hoop caught on.

The match received national coverage in several media outlets, and Benepe and Manshel found themselves the authorities on forming a quidditch team. The IQA soon followed, and the number of teams competing at the Quidditch World Cup grows every fall.

Despite the success, however, Benepe tells Weekend All Things Considered host Guy Raz he isn't sure NCAA status would be a good thing for the game.

"I think quidditch sprang out of a desire to create a game that's more just about having fun," he says. "NCAA sports at colleges are superintense.

"I have a lot of respect for varsity athletes at colleges, because they dedicate their whole lives to that, and I don't want quidditch to be something that becomes that serious."