Accessibility links
Home Loan Blues: Refinancing Isn't So Easy Many homeowners who would love to lower their mortgage payment don't qualify for refinancing. And many who do are discovering that getting a new loan isn't so easy anymore. Housing experts say high credit scores are among the factors that remain extremely important to lenders. 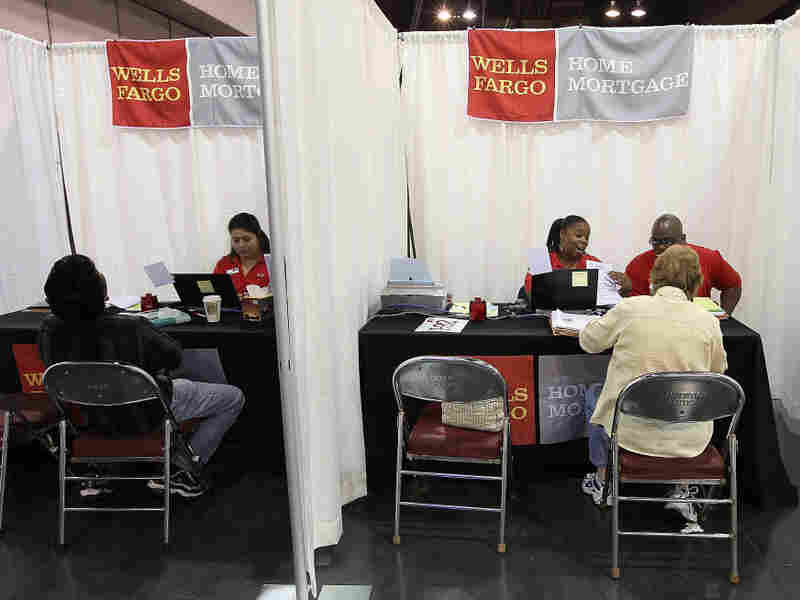 Mortgage rates are at all-time lows. Rates range from 4 percent to 4.5 percent for some borrowers.

It's a great time to refinance -- if you can.

Many homeowners who would love to lower their mortgage payment don't qualify. And many who do are discovering that getting a new loan isn't as easy as it used to be.

Pennsylvania resident Jeff Marsico has been with the same lender for 15 years. He's had two houses and has never missed a payment. With equity in his house, a solid income and credit score, he figured refinancing with his existing lender would be fairly simple. It wasn't.

It took 90 days to get the loan -- and along the way the lender inundated him with requests for documents: every page -- even the blank ones -- of his brokerage statements, and every page and schedule of his two most recent tax returns.

Research your credit Score. The credit score cutoff to get any home loan is substantially higher today than it used to be. People are often surprised by their actual score. Check out your score ahead of time. Consumers are eligible to receive a free annual credit report through AnnualCreditReport.com, a website underwritten by Equifax, Experian and TransUnion. You can also purchase your FICO score from Myfico.com.

Shop around. Rates can be lower at regional lenders and independent mortgage brokers than at the top three lenders — Bank of America, Chase and Wells Fargo.

Lock in a great rate. Rates can change quickly. If you're quoted a great rate, then lock it in that day. This requires filling out an application, which can be done online. Your lender can help you calculate how much you'll save by refinancing. HSH.com and Bankrate.com have lists of lenders nationwide and online calculators for determining how much money refinancing could save you.

Don't delay. Rhonda Porter, a blogger and mortgage originator in Kent, Wash., says not to postpone refinancing — especially if it requires an appraisal (most mortgages do require one). If a neighbor's home goes into foreclosure, it has an impact on surrounding property values. As a result, your home could be appraised for "less than originally expected," and have a negative impact on your refinancing application, Porter says.

Expect fees, strict documentation requirements. Consumer Reports says to expect to pay for an appraisal. What's more, because of stricter lending standards, it's likely that you'll have to provide more documentation then you might have thought necessary.

"Many of you who use accountants probably know that accountants staple the top of the tax return," Marsico explains. "So, in order for me to scan those documents I was pressing the paper up against the scanner and it left a black mark at the top."

But it wasn't pristine enough for the lender who wanted blotch-free pages. Marsico undid the staples and rescanned the pages.

There were lots of other frustrations too. But in the end, he got a 4.375 percent loan that will save him about $1,000 a year on his mortgage payment.

But not everyone will be so fortunate. The days of easy-to-get mortgages are over, says Greg McBride, a senior financial analyst at Bankrate.com.

"Prior to the credit crunch, if you had a pulse you got a loan," he says.

But today, he says, many homeowners can't refinance because they don't have enough equity, their incomes are too low, their debt is too high or their credit scores aren't good enough.

The Role Of Credit Scores

FICO scores -- the ones used by nearly all the big lenders, range between 300 and 850. These days, a score of 740 or even higher is required to get the best rate. Three years ago a score in the 700 range might have sufficed.

"Lenders are still pretty skittish because of the high level of mortgage default[s] and borrowers have to bring more to the table than a smiling face," he says.

Part of the reason may be that credit scores provided to mortgage lenders are tweaked slightly differently from those provided to auto dealers or credit card companies.

Lenders typically look at scores from all three of the major credit reporting agencies and use the middle score in assessing the borrower's credit history.

Something as seemingly insignificant as a $550 balance rather than a $500 balance on a credit card could hurt your score, Porter says.

"Credit scoring is not an exact science and yet people are judged heavily by it," she adds.

And will the low rates continue? The association believes rates will rise to just over 5 percent next year and up to 5.5 percent in 2012.