Accessibility links
A Ghostly French Field Where Veterans Day Was Born In America, it is Veterans Day. But Europe mainly still remembers Nov. 11 as the date World War I ended in 1918. A visit to the 1916 battlefield of Somme, north of Paris, is a haunting reminder of "The War to End All Wars." 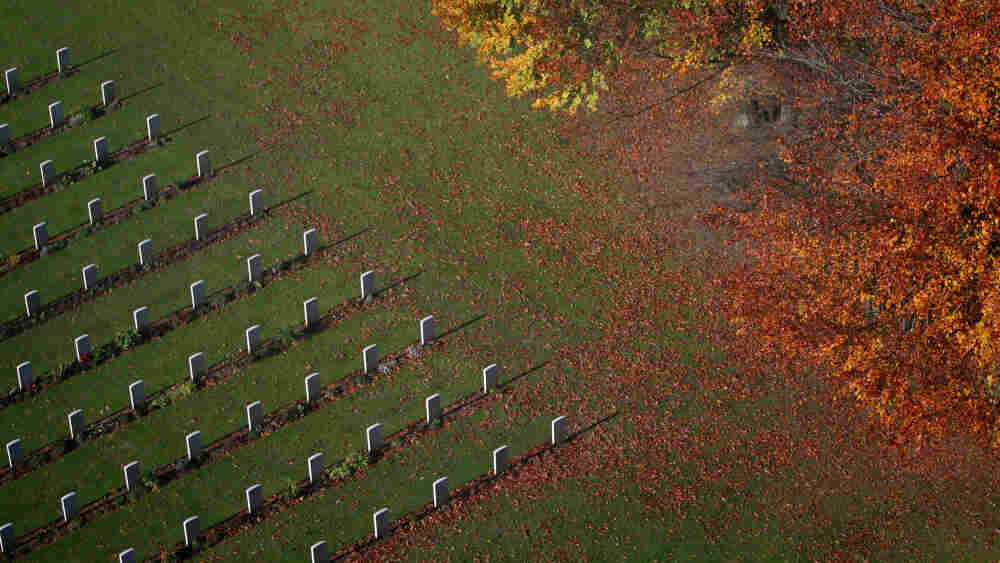 Autumn leaves gather in front of the graves of unknown soldiers on the grounds of the Thiepval Memorial in northern France. The Battle of the Somme raged from July to November 1916 and claimed more than 1 million British, French and German casualties, making it one of the bloodiest engagements in military history. Matt Cardy/Getty Images hide caption

America celebrates Veterans Day by remembering the sacrifices of its service men and women in all wars. But in Europe, Nov. 11 is set aside strictly to honor those who fought in the First World War.

In Europe, memories of The Great War still stir emotion. Somber ceremonies will take place today in both France and Britain, nations that, along with Germany, paid a heavy toll.

Just as its name implies, Armistice Day is in memory of the truce of 1918, when on the 11th minute of the 11th hour of the 11th day of the 11th month, the guns fell silent.

The line of trenches that was known as the Western Front cuts right across the eastern half of France. And French towns and regions like Verdun and the Somme bear names that will forever be associated with the horrors of trench warfare.

About 90 minutes north of Paris by car, the battlefields and monuments to the Somme offensive offer a sober reminder of a war fading into history as almost all of its veterans have succumbed to old age, and contemporary conflicts fill the headlines. 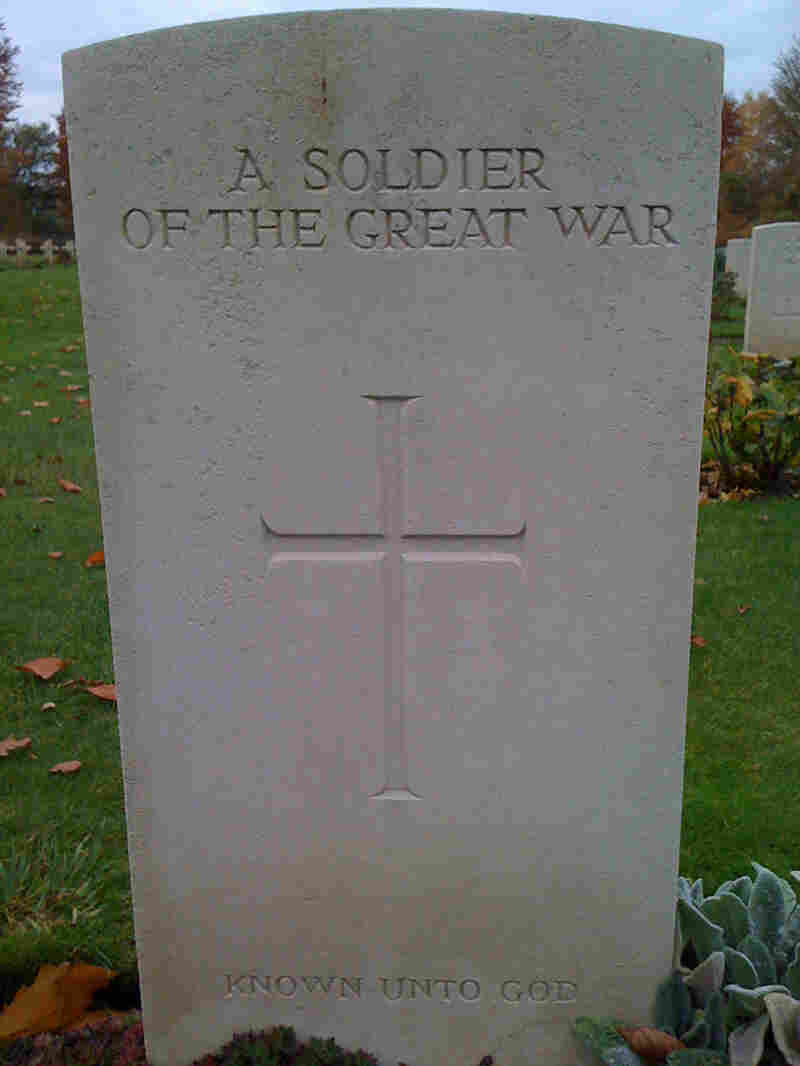 A tombstone to one of the "unknowns" of the Battle of the Somme at a military cemetery in northern France. The first day of the battle in 1916 claimed the lives of some 20,000 British troops. Eleanor Beardsley/NPR hide caption

In the Somme valley, from July to November 1916, the British and French faced off in the muddy trenches against the Germans. The battle resulted in staggering losses, all for only a few yards of territory.

On the first day of the battle alone, some 20,000 British troops were killed, the deadliest day in British military history. In total, the First World War took the lives of about 1 million French soldiers, 1 million British troops and nearly 2 million Germans.

To put that in perspective, consider that around 58,000 American soldiers died in the Vietnam War. The World War I death toll is even more staggering when you consider the lower populations of that day.

Today most of the battlefields have been plowed into fertile farmland. This time of year, French farmers are harvesting their sugar beets. In what is known as an "iron harvest," farmers continue to find grenades and other ordnance from World War I in their fields.

In a few areas the battlefields have been preserved. The once-deep trenches now appear like rows of bumpy, grass-covered stitches running across the land. Most of the towns, too, have been rebuilt, but visitors can buy picture postcards in the shops that show their utter destruction nearly a century ago.

Today the United States and its European allies fight faraway wars while everything seems to go on as usual back home.

A visit to a place like the Somme makes clear what all-encompassing warfare is about for those whose homes and farmland become the battlefields. World War I engulfed whole societies, ended a way of life and decimated an entire generation of young men.

The landscape of the Somme is dotted with military cemeteries, and this is perhaps the most haunting part of the visit. The Franco-British monument to the missing at Thiepval is sad and beautiful. Its massive brick and marble structure rises incongruously out of the peaceful farmland and forest. Around the monument are rows of tombstones bearing the inscription, "A Soldier Of The Great War -- Known Unto God."

As I read the names of some of the 73,000 soldiers who were never found, inscribed on the sides of the monument, I was filled with such sadness at the futility of their loss.

Only 21 years of peace separated the end of World War I from the beginning of World War II. These young men believed they were fighting valiantly for their nations in "The War to End All Wars." When, in fact, theirs was a prelude to an even deadlier conflict.