Accessibility links
'Don't Ask, Don't Tell' Repeal In Lame-Duck Hands Earlier this year, the House approved a repeal of the law that prevents those who are gay from serving openly in the military. It was part of a larger defense bill, which stalled in the Senate. The lame-duck session of Congress starting Monday may be the last chance Democrats have to get it through.

Ever since his time on the campaign trail, President Obama has vowed "don't ask, don't tell" -- the 1993 law that prevents those who are gay from serving openly in the military -- would end on his watch.

It hasn't yet, of course. Earlier this year, the House approved a repeal of the law as part of a larger defense bill. That big bill stalled in the Senate. Now, the law's fate may be up to the lame-duck session of Congress that begins Monday.

Last week, Obama looked to the lame-duck session to help him make good on his promise: "We need to provide certainty, and it's time for us to move this policy forward -- and this should not be a partisan issue."

But rolling back don't ask, don't tell has become a partisan issue -- the amendment to repeal the policy got just one Republican vote in the Senate Armed Services Committee. In September, when Democrats tried taking up the defense authorization bill that the repeal was attached to, it got blocked by a GOP filibuster. 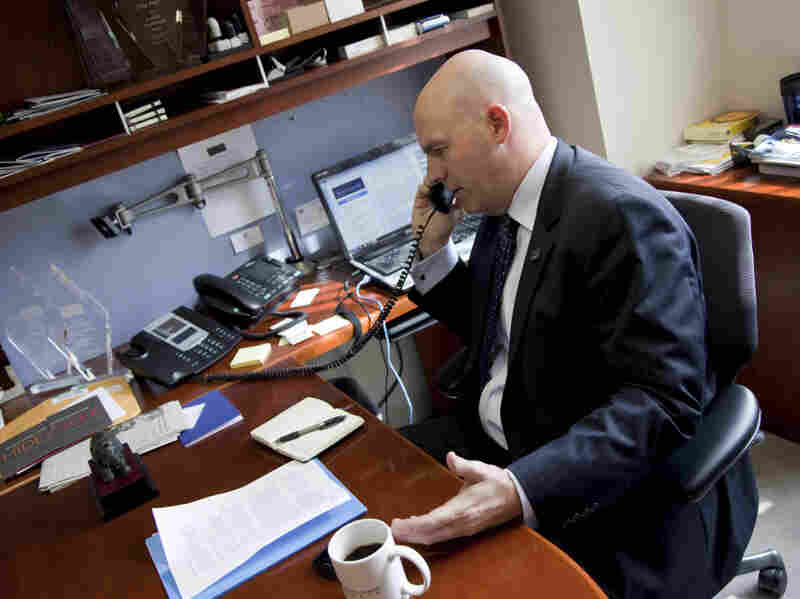 R. Clarke Cooper, a, director of the pro-repeal group Log Cabin Republicans, has been urging GOP senators and their staffs to let the defense authorization bill and its repeal of don't ask, don't tell come up for a vote once a Pentagon study is released Dec. 1. R. Clarke Cooper/AP hide caption

"I do not oppose or support the repeal of don't ask, don't tell at this time," Sen. John McCain, the defense panel's top Republican, said at the time. "I do oppose taking legislative action prior to the completion of a real and thorough review of the law. A complete survey to evaluate the impact of repeal on the men and women serving in our military should be concluded before moving forward."

The Pentagon has, in fact, done a massive survey of service members and their spouses to gauge the impact of a repeal of don't ask, don't tell. The matter has also been studied by a blue-ribbon commission, and its report is due Dec. 1.

That gives R. Clarke Cooper, director of the pro-repeal group Log Cabin Republicans, some hope. At Obama's behest, Cooper has been urging GOP senators and their staffs to let the defense authorization bill and its repeal of don't ask, don't tell come up for a vote once the Pentagon study is released.

"It'll enable them to come out and say, 'OK, I've been waiting for this study, I'm on record saying that I want to see this study done, and, you know what, sure enough, it checks the box, it actually reports what we thought it would say -- open service is not an issue, so let's vote yes on repeal,' " Cooper says.

But McCain could be a major obstacle. A spokeswoman for the Arizona senator says he does not want the don't ask, don't tell repeal provision to stay in the defense authorization bill.

Carl Levin, the Democrat who chairs the Armed Services Committee, told a local paper in Michigan on Tuesday that he wants the defense bill passed and he also wants don't ask, don't tell repealed -- but Levin added that he did not know whether both things could be accomplished in the lame-duck session.

Other senators fear the repeal could be taken out of the bill.

"I'm very concerned it might be stripped," says Colorado Democrat Mark Udall, who's also on the Armed Services Committee. Udall says despite Defense Secretary Robert Gates' call over the weekend for don't ask, don't tell to be repealed, it's not clear Republicans will let it come to a vote.

"So I have joined with a number of other senators to call on the Senate leadership and others in the Senate to open the floor of the Senate to debate the National Defense Authorization Act and the repeal of don't ask, don't tell that's included in it," he says.

The White House also opposes stripping the repeal from the defense measure. That bill has passed Congress every one of the past 48 years, and the lame-duck session is its last chance for passage.

With Republicans taking over the House, this could also be the last chance Democrats will have for some time to undo don't ask, don't tell.