Accessibility links
The Curious Incident of the Funnel Cake in the Lawn As a 6-year-old, T. Susan Chang experienced her first culinary fiasco: a funnel cake gone horribly wrong. Thirty years passed before she dared once again to make the decadent spirals of deep-fried batter sprinkled with powdered sugar.

The Curious Incident of the Funnel Cake in the Lawn

The Curious Incident of the Funnel Cake in the Lawn 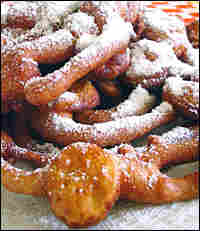 Funnel cakes — spirals of deep-fried batter sprinkled with powdered sugar — are the beloved fare of many a fair across the United States. T. Susan Chang for NPR hide caption 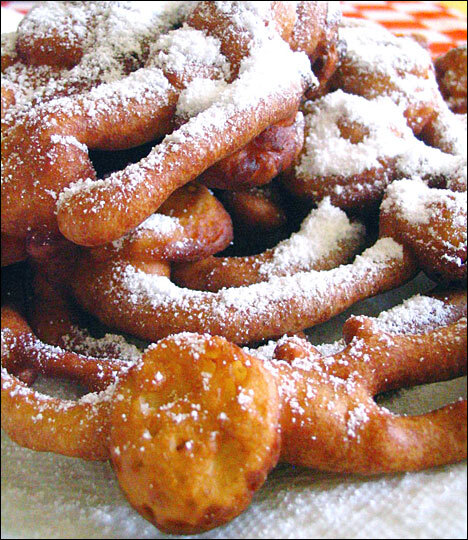 Funnel cakes — spirals of deep-fried batter sprinkled with powdered sugar — are the beloved fare of many a fair across the United States.

T. Susan Chang is a New England-based freelance writer who recently served as a former Kellogg Food and Society Policy Fellow. She also is the Boston Globe's regular cookbook reviewer, and her articles on cooking, gardening and nutrition appear in a variety of national and regional publications. You can find more information at her Web site, tsusanchang.com.

A Fresh Breeze of Summer Cookbooks June 4, 2007
Cook's Commencement: Mastering a Meal for One May 30, 2007
Easter Egg Breads: Sacred, Profane and Scrumptious April 4, 2007

I suppose that a person's first spectacular failure in the kitchen is a kind of coming of age. You could call it a rite of passage, as necessary as embarrassing first dates and awkward job interviews.

But my first culinary fiasco — which I shared with my sister — took place when we were at the tender ages of 6 and 11, and in a manner quite devoid of ceremony.

We knew about funnel cakes, those gilded, decadent spirals of deep-fried batter found at fairs of all stripes: street, county or state. Maybe we'd sampled one or two, our eyes streaming as we burned the tips of our tongues, our shirts snowy with spilled powdered sugar.

My sister had gotten hold of a recipe in Home Ec (remember Home Ec?), so one afternoon when both parents were out, we decided to make our own.

The kitchen was my mother's realm. I felt anything but at ease there, among the pots and pans huddled like feral pets in the dark berths of a floor cupboard; the mysterious, sticky bottles of oils swinging out of the Lazy Susan corner cabinet.

Most daunting of all was the waiting stove, with the numbers worn off its knobs and the dangerous-looking grates. It looked as though it was entering into a battle of wits with two unarmed girls, and you could tell it knew who would win.

Suddenly, the oil in the pan began to splatter and pop, spraying us with scalding drops; we hadn't thought to dry all the water off the pan before we started. Yelping in pain, we raised the heat, thinking that would evaporate the water faster — and jumped back as the oil burbled harder and began to smoke.

Surely it was hot enough now! We raised the funnel and attempted to pour batter through it while moving it in spirals. But fear of hot oil and our own unsteady hands fouled our aim, and the batter spilled liberally over the grates.

I ran for paper towels, which ignited while we attempted to sop up the mess. We threw the flaming wad in the sink and ran back to the pan, where our first and only funnel cake was sizzling loudly, burnt black on the bottom and raw on top. As dark smoke filled the kitchen, we tossed the whole experiment into the sink, on top of the smoldering towels, and climbed on the counters to open the window.

No expert was needed to pronounce it a disaster. I am sorry to say we tried to dispose of the evidence by eating it — it was a funnel cake, after all, how bad could it be? — but this proved impossible. We spent the next hour clearing the countertops and scrubbing the stove — hungrily, I might add.

Afterward, we got a shovel and buried the funnel cake in the backyard — where, in a rare burst of good judgment, we figured no one would think to look for it. I went back three times to check it, feeling sure some sort of spiral-shaped bare patch would bear witness to our ignominy in future years.

In the end, we needn't have worried. If our mother noticed something awry in her suspiciously tidy yet reeking kitchen, she gave no sign of it. She may have arched an eyebrow, but she never said a word.

In the grown-up years that followed, I came to love the smell of a New York City street fair, the sausages and peppers, the arepa fritters of fried corn and cheese, and yes, the funnel cakes.

Blessed with an iron-clad stomach, I could eat my way up and down the avenue all day. The next morning I would feel nothing worse than melancholy as the carts packed up, leaving behind a pavement slick with grease.

But even as I grew confident around a stove, progressing from roasting a chicken to boning a duck, from baking muffins to culturing sourdough, I avoided making funnel cake. I guess I was still harboring a 6-year-old, oil-smudged fugitive, pursued by the twin furies of incompetence and guilt. Now that the story's out, I think the prisoner is free to go.

The truth of the matter is that funnel cake — for those with a clear conscience — is just not that hard to make. Just be sensible when you deep-fry:

1. Use a splatter screen if you have one.

2. Test for temperature, either with a deep-fat thermometer or by using the cube-of-bread test (the oil's the right temperature if the cube turns golden in 30 seconds).

3. Fill the funnel first, stopping the hole with your finger until you begin pouring.

4. Pour as close to the oil as you can so that the batter doesn't cause the hot oil to splash you.

Don't worry about cleaning up right away. Eat your funnel cake hot and dust it liberally with powdered sugar. If you eat it outside in, the center will still be warm when you get there.

When you're done, you probably won't feel like doing much of anything. Funnel cake has a way of bringing life to a standstill. But I can tell you one thing: You don't have to wait 30 years to make another. 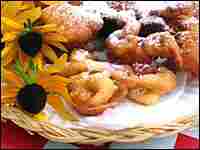 You'll need a funnel with a 1/2-inch opening at the base. If you can't locate one with an opening that wide, you can cut the bottom off a regular plastic funnel (typically with a 1/4-inch opening).

In a medium bowl, combine the flour, granulated sugar, baking powder and salt. Stir with a whisk until thoroughly combined.

Pour the milk into a measuring cup and add the 2 eggs. Whisk with a fork until combined. Pour the milk and egg mixture into the dry ingredients and whisk thoroughly until you have a smooth batter.

Add 1/2 inch of oil to a large, heavy skillet or deep pot and heat to 350 degrees (use a deep-fat thermometer or cubes of bread to test: if the bread turns golden-brown in 30 seconds, the oil is the right temperature). Fill the funnel with batter, holding your thumb over the opening.

Drizzle the batter out in a spiral, starting from the center of the pan. Hold the funnel as close to the pan as you can to minimize splatters. Let the cake cook until golden brown (about 45 seconds to a minute), then flip to the other side with tongs and brown the other side. Drain on paper towels. Sift confectioners' sugar over the cake and serve hot — it's best to serve them one at a time as you make them.