Accessibility links
Laws Limiting Car-Phone Use Tough to Enforce Three out of four of us are using cell phones in our cars. Five states and the District of Columbia have banned the use of hand-held phones while driving. But is such a law even enforceable anymore? The answer may be found in New York, which was the first state to clamp down on driving and dialing. 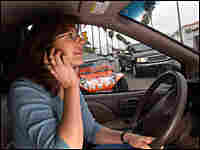 These days, it seems like almost everybody old enough to dial has a cell phone, and studies show that three out of four of us are using them in our cars.

Five states and the District of Columbia have banned the use of hand-held phones while driving. But is such a law even enforceable anymore? The answer may be found in New York, which was the first state to clamp down on driving and dialing six years ago.

Even with flashing lights and a siren, traffic enforcement officer Joe Claybaugh finds it hard to get the attention of drivers these days. Claybaugh is an officer in Camillus, N.Y., a suburb of Syracuse. On this particular day, he's looking for cell-phone violators, and he says it won't take long to find one.

"Every second car," Claybaugh says. "You'll see when we get up here. It's unbelievable."

Sure enough, we're soon in pursuit of a digital desperado. As it turns out, the offender is a bit desperate.

"Well, my phone isn't Bluetooth-compatible," explains Joanne Spoto-Decker, a county employee caught driving while phoning. "And I only have one headset, which my husband has, but ... it just wasn't a safe thing to do."

While this driver at least agrees with the law, many appear to ignore it, despite the $100 fine.

Tom Sherman spends his days on the roads around Syracuse, driving from job to job as a home inspector. His teal-green Chevy pickup is his office.

"We might come out to the vehicle and find 11 or 12 phone calls we have to return," Sherman says. "So we have to choose between either doing business or following the law, which is pretty much ignored by everybody else also. It's kind of looked at like a jaywalking law."

One study by the insurance industry found that while phone use dipped by about half right after New York's law went into effect in 2001, within a year, it had bounced back to pre-restriction levels.

"You see a lot of people driving around with cell phones up to their ears. Always!" Sherman says. "And if I'm not speaking on my phone, I'm always complaining about 'em."

Crackdowns on cell-phone violations are rare. Camillus, a town of about 23,000, has been more aggressive than most at enforcing the law, but the police department typically has just one officer on the road assigned specifically to traffic enforcement.

Most departments just don't have the manpower and budget to go after cell-phone violators. And a lot of people, including Officer Claybaugh, say the target is too narrow.

"I hate it just being a cell phone. I'd like to see it distracted driving in general," Claybaugh says. "Saw a guy down here at four corners about a month ago shaving."

New York statistics from 2005 attribute less than 1 percent of traffic accidents to cell-phone use. But nearly one-quarter were noted as "driver inattention or distraction." Some studies have it as high as 80 percent.

Assemblyman Felix Ortiz of Brooklyn wrote the New York law. He wanted a total ban on in-car calling but says the wireless industry insisted on an exemption for hands-free devices. Ortiz still defends that compromise but admits that it may not be enough.

"We need to begin to concentrate more not just on the cell phone but also all the other innovative technology that is coming now to our vehicles — GPS and others — to keep our drivers concentrating on what they're supposed to do," Ortiz says.

Ortiz may be fighting a rear-guard action. As technology accelerates, so will the battle for the eyes and hands of drivers. A survey this year by Zogby International revealed that two-thirds of drivers ages 18 to 24 are reading and typing text messages while they're at the wheel.

Meanwhile, Ortiz is renewing his push for a statewide ban on phone use by drivers in moving vehicles — hands or no hands — except for emergency calls.