Accessibility links
Hurricane Dean Weakens, Expected to Spare Texas Hurricane Dean weakens after slamming into the Mexican coast as a Category 5 storm. The eye of the storm made landfall near Majahual, a popular port with cruise liners located about 40 miles east-northeast of Chetumal and the Belize border, according to the U.S. National Hurricane Center. 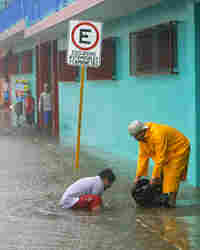 The Texas Gulf Coast appears to be out of danger, as eased its storm readiness today as a weakened Hurricane Dean blew westward across Mexico's Yucatan Peninsula.

Texas Gov. Rick Perry on Tuesday afternoon ordered the withdrawal of rescue teams, fuel tanks and other equipment deployed to South Texas and a statewide network prepared to house evacuees will stand down.

Texans had been edgy about Hurricane Dean because large parts of the state were still saturated from flooding caused by remnants of Tropical Storm Erin.

Hurricane Dean quickly weakened into a Category 2 storm after roaring into Mexico's Caribbean coast Tuesday morning as one of the most powerful storms on record, meteorologists said.

The Category 5 hurricane was packing maximum sustained winds of 165 mph and gusts that reached 200 mph when it struck the Yucatan Peninsula near the town of Majahual.

Dean pushed a surge of seawater 12 to 18 feet above normal tides onto the coast and dumped huge amounts of rain on the low-lying Yucatan Peninsula, where thousands of Mayan Indians live in stick huts in isolated communities.

The governor of Quintana Roo told Mexico's Televisa network there were no immediate reports of deaths, injuries or major damage in the sparsely populated area, where evacuations were completed before the storm went ashore. However, officials have not had the opportunity to inspect the area throughly, he said.

Hurricane Dean was the third-most intense Atlantic hurricane to make landfall since record keeping began in the 1850s, based on its central atmospheric pressure, forecasters said. The pressure in a hurricane's eye is often used to compare storms throughout history because, in the past, wind gauges were often damaged or destroyed by powerful hurricanes, said Jamie Rhome, a hurricane specialist with the National Hurricane Center.

The only other storms that hit land with a lower pressure were the 1935 Labor Day hurricane that hit the Florida Keys and Hurricane Gilbert, which hit Cancun, Mexico, in 1988, forecasters said.

Dean moved toward the Bay of Campeche on Tuesday afternoon, forcing Petroleos Mexicanos to evacuate all 18,000 offshore workers and shut down production rigs. Officials said the shutdown will result in a production loss of 2.7 million barrels of oil and 2.6 billion cubic feet of natural gas a day.

The hurricane center said Dean could gain power as it crosses the Bay of Campeche and would likely be a major hurricane when it makes landfall a second time on Wednesday. The storm's track would carry it into the central Mexican coast about 400 miles south of the Texas border.

"We often see that when a storm weakens, people let down their guard completely. You shouldn't do that," said Rhome. "This storm probably won't become a Category 5 again, but it will still be powerful."

On Tuesday, trees fell and debris flew through the air in Corozal on Belize's northern border with Mexico. The government had evacuated Caye Caulker and Ambergris Caye - both popular with U.S. tourists - and ordered a dusk-to-dawn curfew from Belize City to the Mexican border.

Mayor Zenaida Moya urged residents to leave Belize City, saying it does not have shelters strong enough to withstand a storm of Dean's size.

In Mexico during the past three days, officials put more than 50,000 people on flights leaving various parts of the Yucatan peninsula, the federal Communications and Transportation Department said in a statement.

Cancun, well north of Dean's landfall, saw strong winds since the storm swirled over 75,000 square miles, about the size of Nebraska.

Cancun's tourist strip is still marked with cranes used to repair the damage from 2005's Hurricane Wilma, which caused $3 billion in losses. Dean is expected to be even stronger than Wilma, which stalled over Cancun and pummeled it for a day.

The worst storm to hit Latin America in modern times was 1998's Hurricane Mitch, which killed nearly 11,000 people and left more than 8,000 missing, most in Honduras and Nicaragua.