Accessibility links
Joshua Bell: A Sonata in the South Joshua Bell has unpacked his fancy fiddle in places as diverse as Carnegie Hall and the Washington, D.C. subway. Hear him, along with pianist Jeremy Denk, play the passionate Violin Sonata No. 1 by Saint-Saens in concert at the intimate Spivey Hall, near Atlanta. 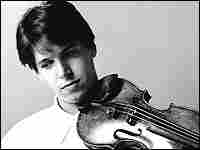 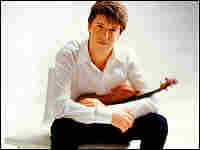 Joshua Bell likes to make his 1713 Stradivarius sing. He says the instrument is close to the human voice. Photo: Bill Phelps hide caption 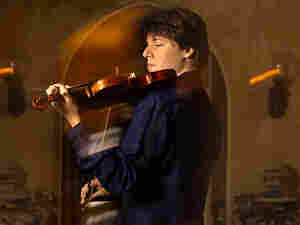 Joshua Bell likes to make his 1713 Stradivarius sing. He says the instrument is close to the human voice. Timothy White hide caption

Many musicians struggle to live a well-rounded life. But violinist Joshua Bell doesn't seem to have that problem. Hovering on the cusp of 40 years old, his adventuresome spirit and supreme playing make him one of today's most sought-after classical musicians.

Bell can pick his own projects—recording Bartok, bluegrass or Beethoven—or play pieces composers have written just for him. He's appeared on Sesame Street and the Today Show and played on popular movie soundtracks.

Recently, Bell unpacked his multi-million dollar Stradivarius in the Washington, D.C. Metro, pulled a baseball cap low over his face and played Bach for spare change. It was a joint experiment with the Washington Post Magazine (read article), just to see if some great fiddling could slice through the frenzy of a morning rush hour. Away from the violin, Bell is a formidable athlete—a fine basketball player, golfer and an excellent bowler.

Bell's musical tastes are nothing if not omnivorous. Just this summer, he's played Bach in Switzerland, Tchaikovsky in Hong Kong and a contemporary piece by Edgar Meyer in Seoul.

One piece that remains a staple of Bell's repertoire is the Violin Sonata No. 1 by Camille Saint-Saens. He and his recital partner, pianist Jeremy Denk, chose the piece to finish off the first half of their concert at the intimate, 400-seat Spivey Hall, just outside Atlanta.

Saint-Saens is usually thought of as a practitioner of well-constructed elegance, and although that's true of this Sonata (written in 1885 when he was 50) there are some surprises along the way.

Take the very opening of the sonata. Saint-Saens introduces a simple, yet seductive idea right off the bat, by having the piano and violin play nearly the same notes—the piano with both hands, one high, and one low. It creates an ethereal and mysterious texture.

Then there's the final movement. A soft, solemn bridge of notes in the piano leads straight into the flashy finale which keeps the violin and piano chasing each other in a kind of 'Flight of the Bumblebee' constant motion. It all ends with spectacular fireworks.

Joshua Bell plays the famous 'Gibson ex Huberman' Stradivarius, built in 1713. It's a fiddle with a tale to tell. Stradivarius instruments have a long and venerable history of being sold for high prices, and for being stolen. Bell's has actually been stolen twice.

The first time was from a Vienna hotel room in 1919. A dealer returned it right away. But the second time, the deed was done while its owner, the famous Polish violinist Bronislaw Huberman, played his other violin on stage at Carnegie Hall, in 1936. The thief was violinist Julian Altmann, who distracted the Carnegie Hall guard with a cigar, slipped into the dressing room, and walked out with the violin under his coat. Altman played the violin for nearly 50 years, never letting on that it was the famous stolen Strad until just days before he died, in 1985.