Accessibility links
Pesky and Not Picky, Bedbugs Make a Comeback The saying "Don't let the bedbugs bite" might have seemed like a thing of the past. The little blood-sucking critters were mostly eradicated in the 1940s, but they seem to be staging a creepy return, causing great discomfort among sleepers across the country.

Listen
Pesky and Not Picky, Bedbugs Make a Comeback 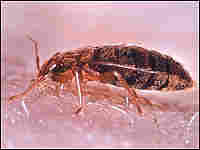 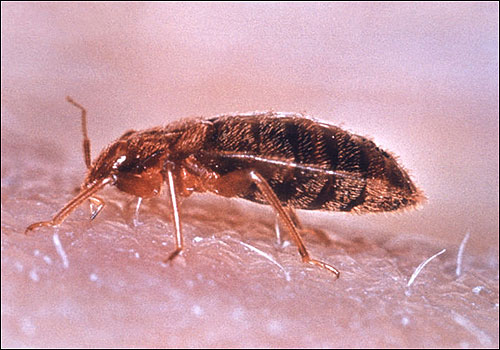 Out with the Bug

Learn how to kick the little vampires out of your bed. 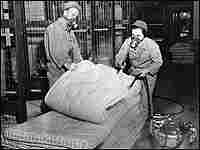 Exterminators spray mattresses in an Army barracks with DDT solution in 1944. The chemical was part of a nationwide effort to get rid of bedbugs and other pests. Bettmann/Corbis hide caption 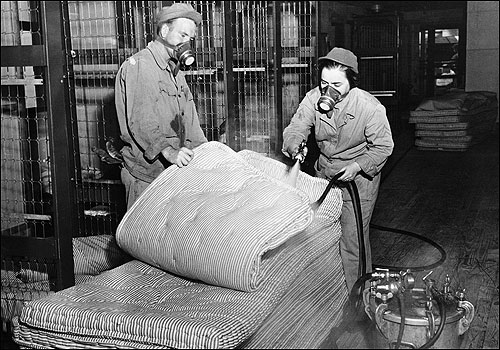 Exterminators spray mattresses in an Army barracks with DDT solution in 1944. The chemical was part of a nationwide effort to get rid of bedbugs and other pests.

They suck your blood in the middle of the night and vanish when the sun comes up. No, we are not talking about vampires. We're talking about bedbugs that make people want to itch their arms and legs off.

Mayhill Fowler first noticed the bite marks on her wrists and ankles several years ago when she was living in New York City. New ones showed up almost every morning, usually in groups of three.

"I found out later that this is typical," Fowler says. "'Breakfast, lunch and dinner' is what they call it. And they are very small and kind of hard little bites. You know how mosquito bites can be kind of big? These are kind of small, and they are very itchy."

After going through several tubes of anti-itch ointment, Fowler went to see her doctor.

"She didn't have a clue," she says. "She said maybe it was a nervous reaction." The doctor suggested that Fowler change her soap. But new soap didn't help.

Then one night, Fowler watched a blood-filled bedbug crawl out of her mattress. She called an exterminator and never slept in that bed again.

"I pictured them feasting on that mattress," Fowler says. "I was getting rid of that mattress — I didn't care what it cost. That's why there are credit cards."

Bedbug experts say she's not alone. Entomologist Michael Potter of the University of Kentucky puts it this way in a spooky-sounding Internet video: "I've been on bedbug infestations where people have been to four different dermatologists, and then you get to their home and you flip over the box springs and it's like the Boston Massacre. I mean, there's just thousands of bedbugs, and they never knew they were there."

Return of the Bedbugs

For a long time, the bedbugs weren't there. In the 1950s, exterminators armed with pesticides like DDT drove the parasites out of most of the houses in the country.

But then, 10 years ago, the bugs started coming back. Exterminator Richard Kramer says he found one of the first new infestations in Washington, D.C., in 1998.

"We discovered bedbugs in a hotel downtown," he says. "And ever since then, it's been exponentially increasing — that's the only way to describe it."

Kramer runs Innovative Pest Management, a small firm near Washington. He says he gets thousands of calls a year from people who have just found bedbugs.

The Nature of the Bug

First, he tells them not to panic. Bedbugs aren't venomous, they don't spread dangerous disease, and they aren't linked to filth or moral decay.

But Kramer won't deny that they are creepy.

Kramer warns his callers that it can cost thousands of dollars to get rid of bedbug infestations. Exterminators often visit houses several times before they find all of the bugs and eggs. And when they do, they can't skimp on the chemicals.

"To be effective in controlling the bugs, you have to pretty much — I don't want to say you have to drown them, but you have to get them good and wet with the pesticides," Kramer says.

He says the best way to fight the bugs is to make sure they don't get into your house in the first place. When you travel, always look for brown dots – dried blood — on hotel sheets, and don't forget to check your luggage.

"I saw a suitcase one time in an apartment — couldn't find a bedbug on the bed, [but] looked at the suitcase [and] there had to be 200 bedbugs on this suitcase," Kramer says. "It's like they were catching the train. They found a way to get around."

"So she called me and said 'We have it. What do we do? What do we do?' " Fowler says, recalling her mother's call. "And she definitely traced it. She was like, 'Well, I put my suitcase up against your bed.' "

Fowler and her mother both got rid of their infestations, but not long afterward, Fowler's sister called to say that she was feeling itchy.

They hitch a ride in suitcases, tag along on used furniture, or crawl over from the neighbor's apartment. And once bedbugs have spent the night, they're not eager to move out. They lay low by day, then emerge at night from cracks and crevices, drawn to the heat of the blood pumping through your sleeping body.

So, how should you deal with bedbugs? They're not a health hazard, but they are a miserable nuisance. Dini Miller, an urban pest management specialist at Virginia Tech in Blacksburg, Va., has some advice:

-- When sleeping in a bed that is not your own, check for signs of bed bug feces, which will look like a cluster of small black dots. "That's digested blood," Miller says. "Like you took a fountain pen and very carefully put a whole bunch of black spots on your mattress."

-- Sometimes, you'll see the shed skins of the bugs. But live, moving bugs are the only confirmation that you still have an infestation. The disc-shaped adults are reddish brown and up to a quarter-inch long. Young bedbugs are nearly invisible.

-- Sleeping with bedbugs for one night does not mean they'll come home with you. "They use you and leave you," Miller says. "Your body heat attracts them, and as soon as they're done feeding, it repels them."

-- You are more likely to carry bedbugs home in your luggage, Miller says. "Inspect your suitcase if you think you could have been infested by bedbugs." If you find warning signs, scrub the suitcase with a stiff brush, vacuum it and launder all of your clothes. Heating bedbugs to over 120 degrees kills them, so you can try leaving a suitcase in a hot car. Freezing bedbugs for about a week also kills them.

-- If you're sure you've got an infestation (an entomologist can positively identify the pests), Miller suggests you or your landlord call a licensed pest control operator who has had significant experience with bed bugs. The exterminator will typically give you a list of steps to take, including clearing the floor in the infested room, laundering bed linens (soap and water kills the bugs), and taking apart the bed. Exterminators will then treat the infested mattress and room with pesticides.

-- If you're worried about pesticides, there are alternatives. Steam-cleaning kills bedbugs and their eggs, but it can be expensive and difficult. Other chemicals may take more time than pesticides to kill.

-- Extermination costs can run from a few hundred dollars to more than a thousand dollars, and you may still be left with bedbugs. Miller warns that "there's no one shot deal" for killing the bugs — and few new treatments are in the offing. "This is something that's getting worse," she predicts.