Accessibility links
M.I.A.: Back in Action with 'Kala' Her creations invoke polyglot rhythms and revolutionary rhetoric from around the world. But singer, producer and rapper M.I.A. communicates them through agitated, propulsive dance music. Two years after her debut, her new album finds her more adventurous than ever.

Listen
M.I.A.: Back in Action with 'Kala' 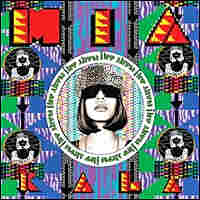 The singer, rapper, and producer known as M.I.A. released one of the most celebrated albums of 2005. Critics and fans were wildly enthusiastic over her blend of revolutionary rhetoric, exotic musical infusions and explosive club tracks.

Two years later, the follow-up has arrived. It's called Kala, and it proves to be an even more adventurous effort.

Kala is not another facile attempt at so-called world music fusion. True, M.I.A. does mix in everything from Bollywood bass lines to Baltimore club beats to Australian aboriginal didgeridoo. But these are far more than showy stamps in a sonic passport.

At a time when globalization is both dissolving and reinforcing national identities, M.I.A.'s music speaks from a blurry borderland through a lingua franca of agitated, propulsive pop. The energy should be familiar to restless youth almost anywhere. Aptly enough, one of the recurring sounds that shout out from the album are the voices of children.

Most of Kala was recorded in different cities in India, Trinidad, Angola — more than half a dozen locations around the world. On her first album, M.I.A. imported the sounds of Sao Paolo favelas and Kingston shantytowns into her studios; with Kala, she went mobile, making it a point to record on location as much as possible. The noisy clash of voices and rhythms makes Kala sound like it's from everywhere and nowhere at once.

Cutting through these contrasting styles is the thin blade of M.I.A.'s own voice — all insistent yelps, slurring syllables and British brogue. She favors repeated couplets that turn her lyrics into a rhythm of their own, as much a part of the sonic fabric as the howling synthesizers and gunshot drum rolls.

M.I.A. rhymes with the swaggering bravado of a street rapper, only she favors bandoliers over bling. Parse the songwriting though, and the sensibility awkwardly falls somewhere between party girl and guerrilla fighter. The message lacks cogency, but her hooks do pack potency, even when they sound nursery rhyme-inspired.

Even if her politics may not prove as irresistible as her rhythms, the scope of her musical ideas and the focus of her execution have both improved over the last two years. Her debut rolled in on a wave of hype, but with Kala, M.I.A. shows that she's a formidable tidal force all her own.