Accessibility links
Virtual Recruiting for Real-World Jobs There's an unusual job fair taking place this week, but you can't get there by plane or car, or drop off your resume in person. You have to travel in cyberspace — to the popular virtual world called Second Life. 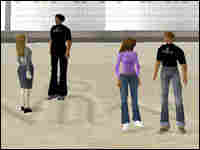 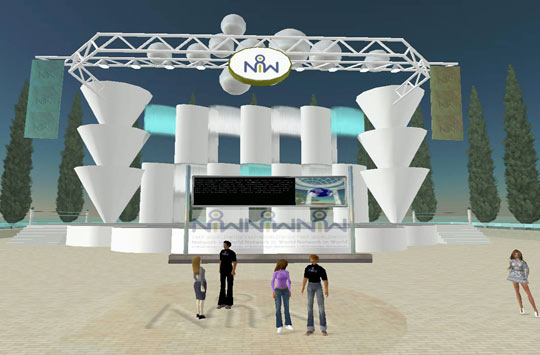 Avatars gather in the Network in World courtyard in the online world Second Life, site of the virtual recruiting fair. 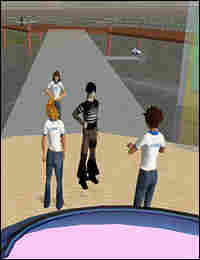 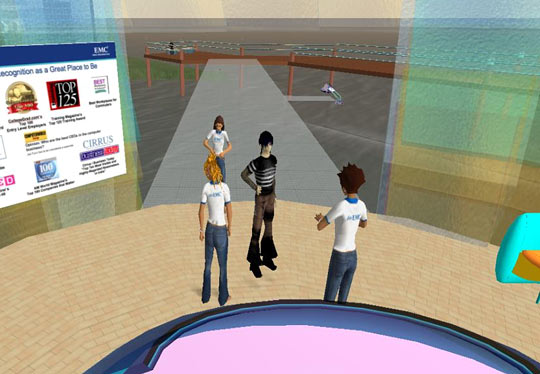 While the venue may be different, some of the same rules apply to virtual job interviews as those in the real world. Dave Lefkow is CEO of talentspark, a Seattle consulting firm that advises companies on recruitment technology. He previously was a vice president for the career site Jobster. In an interview with NPR.org, Lefkow discusses the virtues of virtual recruiting.

With what frame of mind should you approach virtual recruiting if you're a job applicant?

Most of the same rules in the real world apply in the virtual world. You are still interviewing for a real job, and you need to be professional. Yes, you can be a bit more creative with your appearance, but if you go too far over the top, you can lose a chance at a great job.

How does it differ from a real-world interview?

A Second Life interview should not be considered a substitute for a real-world in person interview. It's really like a more personal way to instant message or phone interview someone.

That said, employers and job seekers are still feeling their way around and learning how to interact with each other, so some of the basic things you'd expect to be easy in a real-life interview sometimes aren't so easy. For instance, in one case a job seeker gave an employer a virtual glass of beer instead of a resume — which obviously would never happen in person. Other than that, these are real people having real conversations, so once people get comfortable in their surroundings, it's very much like any other conversation you might have with someone. After a while, you almost forget where you are.

What should a recruiter look for in such virtual interviews?

Recruiters are looking for the same things in the virtual world as they do in the real world, i.e., does this person have the skills, knowledge and ability to do the job and is there a good cultural fit?

Is the atmosphere more relaxed than a sit-down interview?

The atmosphere in Second Life is a bit more relaxed than the real world, but the jobs you might be interviewing for are real and it can still be stressful to look for or interview for a job. Compared to an in-person interview, though, Second Life is a great warm-up for a candidate because you can always hit the backspace button when you start to answer to an interview question. You can't do that in real life, although I'll bet a lot of people wish they could.

Do companies who participate in such an event consider it a way to screen for tech-savvy talent?

The Vancouver Police Department is already recruiting in Second Life for tech-savvy talent. They want people who have a good grasp on new technologies, and can help them combat cyber-crime and eventually, even crime that takes place within Second Life. Remember, there are real dollars changing hands and a real economy, and there are people that will try to take advantage of this. Depending on how popular this gets, the police may have a very vested interest in protecting their citizens.

How should you prepare for such an interview?

There's a bit more preparation in terms of creating your avatar — it's not quite like getting dressed in the morning — but you should prepare for a virtual interview the same way you would prepare for a real-world interview. Read up on the company you're interviewing with, the initiatives happening there, their leadership and values. The best weapon in your arsenal is to talk to people you might know that work there already, or try to make contact with someone already there through a mutual connection.

How many companies are doing it now, and where do you see this going in the future?

There are a small handful of companies recruiting in Second Life right now — around two dozen or so — but I see this expanding as the world adds new members and companies use it in different ways.

Is there a downside, where people who aren't tech savvy are left out of the picture for jobs?

There is definitely a bit of a digital divide issue in Second Life. The software is a pretty heavy download, there are bandwidth and lag issues, and you need a pretty good graphics processor to have a good experience there. However, they said the same thing about the Internet in 1994 and 1995 when the first job boards came out, and now you can find job postings for non-tech positions like truck drivers and hourly workers all over the site. I'd recommend that companies experiment with recruiting initiatives in Second Life, but as with any new technology, you shouldn't put all of your eggs in one basket or force everyone to use it as part of your recruiting process.