Accessibility links
World's Oldest Hominid Now World's Oldest Tourist One of the world's treasures, the fossilized hominid known as "Lucy," goes on public display in Texas on Aug. 31. But controversies are swirling around the exhibition at the Houston Museum of Natural Science — the only confirmed stop so far on what the Ethiopian government hopes will be a lucrative tour. 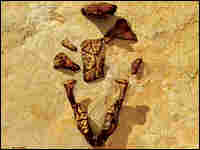 "Lucy" — the 3.2 million-year-old fossil said to be the oldest human ancestor yet unearthed — goes on public display at a Houston museum Aug. 31. The exhibit has caused a storm of controversy among paleontologists. Houston Museum of Natural Science hide caption 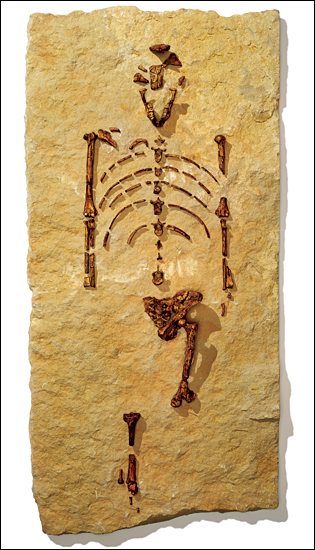 "Lucy" — the 3.2 million-year-old fossil said to be the oldest human ancestor yet unearthed — goes on public display at a Houston museum Aug. 31. The exhibit has caused a storm of controversy among paleontologists, who say Lucy — known in the language of her native Ethiopia as "Dinkenesh," meaning "You are beautiful" — is far too fragile to travel. 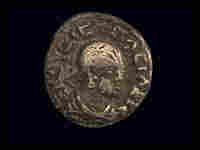 The "Lucy's Legacy" exhibition includes an array of other artifacts from Ethiopia in an effort to illustrate the cultural heritage of the nation and the region. Included are a coin from the third century B.C. that's said to be among the first indigenous coinage in Africa (above); and a 19th-century diptych, below, from the reign of King Menelik. Houston Museum of Natural Science hide caption 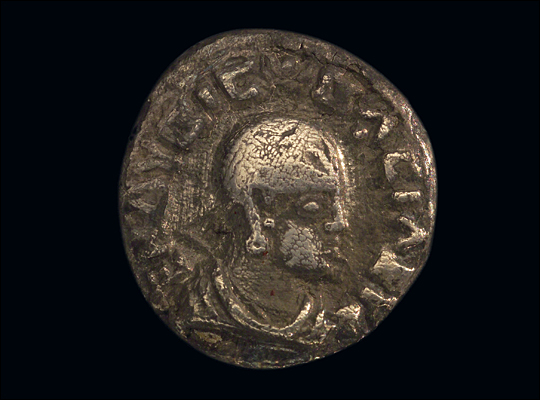 The "Lucy's Legacy" exhibition includes an array of other artifacts from Ethiopia in an effort to illustrate the cultural heritage of the nation and the region. Included are a coin from the third century B.C. that's said to be among the first indigenous coinage in Africa (above); and a 19th-century diptych, below, from the reign of King Menelik. 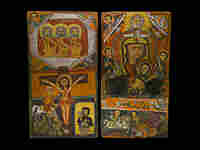 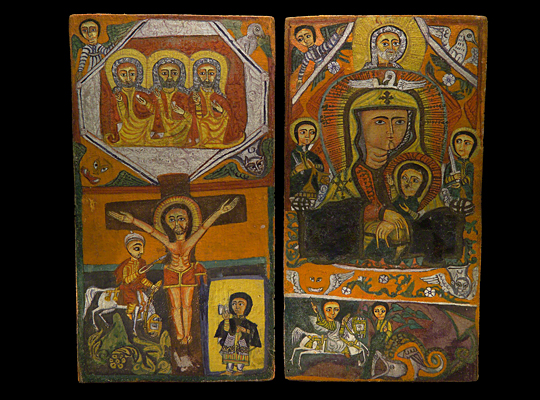 One of the world's treasures, the hominid fossil known as "Lucy," is about to go on public display for the first time outside its native Ethiopia.

The Lucy exhibition has been praised by some as a coup for Texas and denounced by others as the reckless exploitation of one of humanity's most famous ancestors. Renowned paleontologist Richard Leakey even called it a form of prostitution.

Next week, the 3.2 million-year-old fossil goes on display at the Houston Museum of Natural Science. It could be the start of a six-year, 10-city tour for Lucy — although so far, Houston is the only confirmed stop for the ancient hominid.

Other leading paleontologists have joined Leakey in denouncing the tour. Bernard Wood, a professor of human origins at George Washington University in Washington, D.C., has worked with similar fossils, and he says they're extremely fragile.

But Joel Bartsch, the president of the Houston Museum of Natural Science, bristles at the accusation that the tour could damage Lucy.

"When people say Lucy is too fragile, that's really a specious argument," Bartsch says. The fossil was examined by a group of curators who pronounced her hardy and robust, he says. "Is she rare? Is she unique? Is she important to all mankind? Absolutely. But she's not too fragile to travel."

Several paleontologists have suggested that a replica should be used in her place. At her home museum in the Ethiopian capital of Addis Ababa, in fact, cast replicas of Lucy's bones are on display, while the real fossils usually remain locked in a vault.

Bartsch, however, says the role of a museum is to exhibit original artifacts.

"Being in the presence of the original of anything ... takes the message that the object is trying to tell you to a different plain," he says. "No matter how good the replica is, it's still a replica, and that leaves people cold."

Lucy's real bones have been displayed just twice at the Ethiopian National Museum in Addis Ababa.

Officials there have said there are two reasons for sending Lucy on an American tour. The first is to raise the profile of Ethiopia and attract international tourists; the exhibition also includes artifacts from Ethiopia's more modern human history.

The second reason is to raise money for the impoverished African country. The United Nations lists Ethiopia as one of the least-developed nations on earth. Per-capita income is only about $100 a year.

Tickets to the Lucy show will be as much as $20 apiece, by contrast — so a family of five could spend as much seeing Lucy in Houston as an average Ethiopian makes in a year.

The Houston Museum declined to reveal what percentage of the revenue from the Lucy tour will go back to Ethiopia, saying that information is confidential.

The exhibition has angered some Ethiopians in the U.S., who say Lucy is being put at risk by a reckless regime in Addis Ababa.

"The only benefit is for a museum in Houston to make money," says Dula Abduh, a retired banker who left Ethiopia in 1981 and now lives in Houston. He says he doubts that any of the revenue from the Lucy tour will reach Ethiopia's underfunded museums.

"The risk is to all mankind," Abduh says. "And I don't think that risk should have been taken."

The negotiations with the Ethiopian government to bring Lucy's fossilized bones to Houston began five years ago. Texas state senator Rodney Ellis was part of a delegation of local politicians and businessmen who went to Addis Ababa to lobby on Houston's behalf.

Ellis, who's an avid collector of African art, says Lucy is coming to Houston because Texans are bold and weren't afraid to pursue her.

"We do have a world-class museum of natural science," he says. The Lucy exhibit "clearly will go down in the annals of history as a major accomplishment for any museum in the world."

Yet some prominent museums are refusing to participate in the Lucy tour — most notably the Smithsonian's National Museum of Natural History in Washington.

Rick Potts, a paleoanthropologist who runs the Human Origins Program at the Smithsonian, says the role of museums is to safeguard irreplaceable fossils such as Lucy. In fact, he points out that a 1998 agreement signed by 20 countries, including the U.S. and Ethiopia, states that hominid fossils shouldn't be moved out of their country of origin except for scientific research.

The deal to bring Lucy to Houston, Potts says, ignored the concerns of scientists who've spent their careers collecting, curating and studying these types of fossils.

"All of us who are actively involved in the study of early humans appear to be not in favor of the move," Potts says.

Potts and other scientists fear that after this show, other rare fossils formed millions of years ago could also go out on the exhibition circuit — rented, in essence, to the highest bidder.