Accessibility links
Murray Says Crandall Canyon Mine to Be Closed The mine where three rescuers died trying to rescue six trapped miners will be closed, co-owner Bob Murray tells NPR. He also says that a sixth hole may be drilled in an attempt to find the trapped miners.

Listen
Murray Says Crandall Canyon Mine to Be Closed 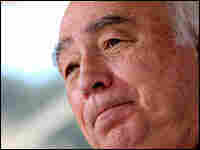 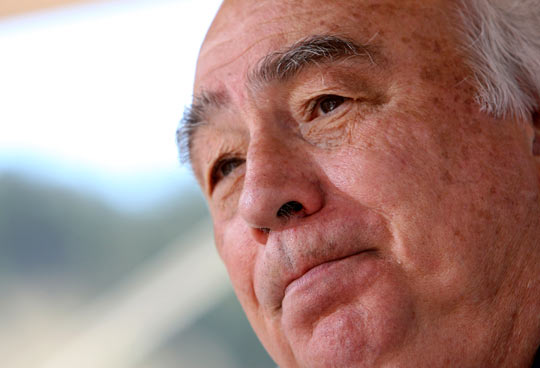 Hear Bob Murray discuss rescue efforts at the Utah mine where six miners were trapped and three rescuers were killed.

On Further Mining: 'This mine is going to be sealed and closed.'

On the Recovery Effort: 'We will drill a sixth hole after this one.'

On the Trapped Miners: 'It's very likely that the miners are trapped and we'll not get them out.'

Using Robots to Mine?

Why do human beings still risk their lives burrowing miles underground and doing one of the most dangerous jobs in the world? Engineers envision a time when robots do most of the dangerous mining work, and even help rescue trapped miners.

The Utah mine where three rescuers died trying to rescue six trapped miners will be closed, co-owner Bob Murray tells NPR. He also says that a sixth hole will be drilled in an attempt to find the trapped miners.

"This mine is going to be sealed and closed," Murray said he told federal mining regulators. "It's a deadly mountain and I'm not going near it," he told NPR.

That comes after the families of six miners missing in the Crandall Canyon mine for two weeks protested plans to continue mining, even if the trapped men are never found.

On Sunday, Murray Energy Vice President Rob Moore indicated that the company would still mine remaining coal reserves at Crandall Canyon. Murray indicated the same thing in a news conference Monday. Both statements triggered a sharp rebuke from the missing miners' families.

Murray also told NPR's John Ydstie that a fifth borehole searching for signs of life in the mine was completed Wednesday morning. The federal Mine Safety and Health Administration told reporters Wednesday night that the fifth borehole did not find a survivable space in the mine. It detected only a six inch gap between the top of a rubble pile and the ceiling of a mine shaft. A microphone lowered into the shaft detected no sounds from the trapped miners

Murray says a sixth borehole will be drilled beginning Thursday morning. It targets the mine shaft the miners were working in August 6th when the coal seam around them exploded. Earlier boreholes tapped possible escape routes. Officials say the sixth borehole should reach the targeted mine shaft Friday night or Saturday morning.

"I'm going to drill until we have no more places to drill," Murray said. "But it's very likely that the miners are trapped and we'll not get them out."

Murray told reporters Wednesday night that there won't be any more attempts to find the missing men, unless the sixth borehole produces some sign of the miners. "This is the last hope," he said.

Three rescuers died and six were injured Aug. 16 before direct rescue efforts were suspended. An independent team of experts concluded Sunday that it's too dangerous to tunnel through the debris-filled mine shaft where the miners are believed to be trapped.

Could Robots Replace Humans in Mines? 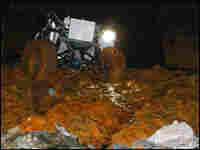 A mining robot, called Groundhog, in action at a Pennsylvania coal mine. Carnegie-Mellon University hide caption 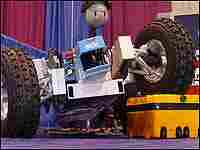 Why do human beings still risk their lives burrowing miles under ground and doing one of the dirtiest and most dangerous jobs in the world?

It's an increasingly urgent question, given the recent high-profile mining accidents in Sago, W.Va., and Huntington, Utah. A small corps of engineers and robotics experts envision a day in the not-too-distant future when robots and other technology do most of the dangerous mining work, and even help rescue trapped miners, like the six men trapped in a mine in Utah.

"It's very promising technology," says Davitt McAteer, a former official with the Mine Safety and Health Administration.

Robotic technology, in particular, holds much promise, McAteer says, especially when it comes to mapping mines and rescuing trapped miners — the special operations of the mining industry. Robots can go where humans dare not tread: down debris-strewn corridors filled with flames and noxious fumes. Engineers envision robots acting as the modern-day version of the canaries that were once lowered into coal mines to check for poisonous gasses. (And robots, of course, don't demand higher salaries or go on strike.)

One of the first mining robots was developed five years ago at Carnegie-Mellon University's Robotics Institute. It was called Groundhog and it looked like a golf cart on steroids. It used lasers to "see" in dark tunnels and map abandoned mines — some of the most dangerous work in the business. Researchers sent Groundhog into an abandoned mine in Pennsylvania where it slogged deep into the orange muck, successfully navigating with its laser rangefinders.

Learning as It Goes

The latest prototype is called Cave Crawler. It's a bit smaller than Groundhog, and even more advanced. It can take photos and video and has sensors mounted that can detect the presence of dangerous gases. Cave Crawler is entirely self-contained— no tethers connecting it to the surface — and "learns" as it roams a mine by mapping its environment in three dimensions then following the map it has just created.

Those who have seen Cave Crawler in action are impressed. "It's fascinating to watch," says Paul Myles, director of sponsored programs at Wheeling Jesuit University in West Virginia, which took part in the robotics study. "The robot has a real sense of logic. If it encounters an obstacle it gets momentarily confused. It has to think through the process and where to go next, and sometimes it throws a fit just like a real person."

Myles and his colleagues hope that robots like Cave Crawler will one day be used in rescue operations. "A robot could drastically speed up the rescue process by doing reconnaissance," says Chuck Whittaker, a robotics engineer at Carnegie-Mellon. "The robot can go ahead and, with its sensors, report what it has found and whether it is safe for humans to proceed."

In 2005, a robot led the way into a Kentucky coal mine that had been belching acrid smoke and heat. The underground passage was uninhabitable. It was the first time a robot was sent into a coal mine ahead of humans to ensure conditions were safe, according to an official with the Mine Safety and Health Administration.

Using robots in rescue operations, though, is problematic. The lasers that guide the robots don't work in smoky environments so the engineers at Carnegie Mellon have experimented with sonar and radar guidance systems, and with some success.

A Question of Money

The biggest obstacle, though, is cost. The original research project was federally funded, but that money has dried up, and it's not clear where future funding will come from. Robots need to be certified by the federal government, and that is a costly and time-consuming process.

So far, the U.S. mining industry has shown little interest in funding such research. The robots are expensive and mining companies have little incentive to spend money developing and deploying them. Advances in other technology have already reduced the number of miners in the U.S. by more than two-thirds, compared with 40 years ago. Today, only about 100,000 people work in the coal-mining industry.

Partly for that reason, and partly because of advances in safety, mining is not nearly as dangerous as it was in the in the past. Since 1990, fatalities have declined by 67 percent, and injuries by 51 percent, according to the National Mining Association.

Some analysts question how much the industry is willing to pay to make mining even more efficient — and safer. For that reason, much of the technology being developed is simpler and cheaper than robots: For instance, ropes that emit low-level light that can help miners find their way out of a dark tunnel. Another promising technology uses ultra-low frequency text-messaging that can penetrate rock and enable mine officials to communicate with workers miles below the surface. One idea is to equip every miner with a tracking device that could relay information, including a miner's vital signs, back to the surface.

"None of the robots are a panacea," says Byron Spice, a spokesman for Carnegie-Mellon. "You're putting them into wet, cold, hot, smoky, and all-around horrible environment. The sensors get dirty, and the robots break down."

Some experts predict that robots in mines will serve much of the same function that they do in the automotive industry. The robots do the most repetitive and dangerous jobs, but don't eliminate the need for human workers.