Accessibility links
'Mary Smith' Wakes Up Village Sleepyheads In the early 20th century, many of England's workers awoke to the tap, tap, tap of their town's "knocker-up." In her children's book Mary Smith, Andrea U'Ren follows a day in the life of a knocker-up armed with a pea shooter. 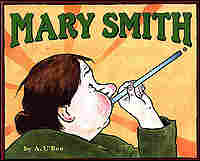 In Mary Smith, author and illustrator Andrea U'Ren follows an English "knocker-up," as she wakes up workers in her village using a pea shooter. Andrea U'Ren hide caption

In the early 20th century, many of England's workers woke up to the soft tap, tap, tap from their town's "knocker-up."

These human alarm clocks — armed with pea shooters or other noisy instruments – walked the village streets with the sole purpose of waking the town's workers. The delightful title character in Andrea U'Ren's children's book, Mary Smith, takes her job as town knocker-up seriously, rousing the laundry maids, the fishmonger, and even the sleepy mayor. In bold, colorful illustrations, children follow a day in Mary Smith's life, watching as her peas clink and clank against workers' windows.

Set against a background of early-morning blues and grays and traditional English buildings, Mary Smith gives colorful life to these historic figures of the Industrial Era. U' Ren also includes an afterword with facts on real-life knocker-ups and the first "wake-up calls."

Mary's day ends with twist. Could her daughter — of all people — still be in bed? 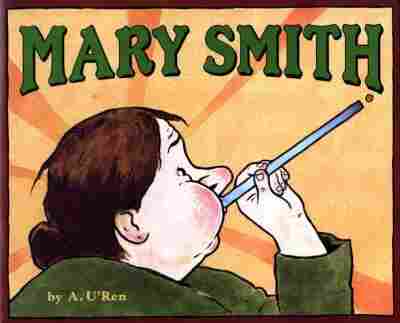