Accessibility links
Iraq War Report Anxiously Awaited The top U.S. commander in Iraq, Gen. David Petraeus, will report to Congress in a few weeks on the results of the military surge in Iraq. The White House and critics of President Bush largely know the challenges the report will pose. So they're both hard at work putting their spin on it ahead of time. 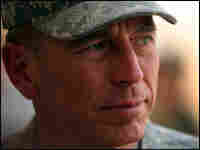 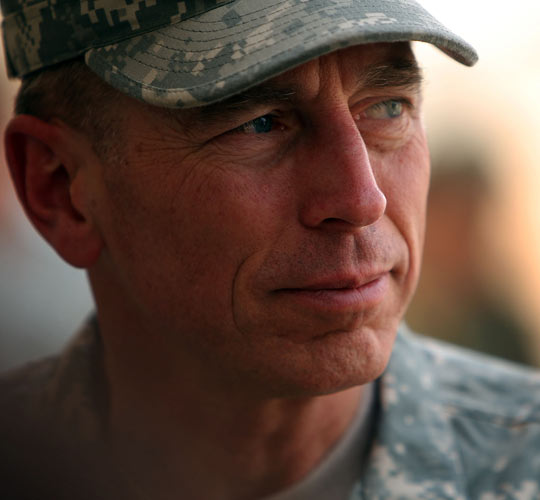 Gen. David Petraeus, commander of U.S. forces in Iraq, in Baghdad on Saturday.

Gen. David Petraeus, the top U.S. commander in Iraq, has nearly three weeks before he reports to Congress on the results of the so-called military surge, but supporters and opponents of the policy are already busy spinning the expected findings.

Both the White House and the president's critics largely know what the report will say on Sept. 15, leaving the Bush administration little time to show that the U.S. troop buildup is having success at enhancing security in Iraq.

That has the president campaigning once again to sell the Iraq war to the American public, an effort that has included speeches and a fresh set of television ads paid for by longtime friends and fundraisers. The speeches began Wednesday at the Veterans of Foreign Wars convention in Kansas City, Mo., where Mr. Bush once again tied the Iraq conflict to the Sept. 11, 2001, attacks.

"An enemy that attacked us on September the 11th, 2001, declared war on the United States of America. And war is what we're engaged in," the president said.

The ads are sponsored by a new group called Freedoms Watch and are designed to restore faith in the war, particularly among Republicans and Republican-leaning independents.

One ad features a woman who lost her uncle, a firefighter, in the Sept. 11 attacks and her husband, who was killed in Iraq.

She says Congress did the right thing voting to defeat terrorism in Afghanistan and in Iraq.

Military commanders have already pointed to progress in Iraq, especially in the Sunni province of al-Anbar. The "surge," however, was supposed to give the government in Baghdad a chance to resolve violence between Shiites and Sunnis, something that has not happened.

That is a reality President Bush tried to address during a summit in Canada this week, saying there has been frustration with the Iraqi leadership. Iraq's Prime Minister Nouri al-Maliki responded during a visit to Syria.

"Everyone knows that the Iraqi government was elected by the Iraqi people, and nobody can impose timetables or deadlines on it," he said.

Mr. Bush promptly issued something of a clarification: "Prime Minister Maliki is a good guy, a good man with a difficult job, and I support him. And it's not up to politicians in Washington, D.C. to say whether he will remain in his position."

The tightrope the president must walk is vexing, but so is the tightrope for Democrats in Congress and in the presidential campaign. Two candidates, Sens. Hillary Clinton and Barack Obama, have long criticized the war, but for the moment, they have joined the president in pointing to some military successes.

"We've begun to change tactics in Iraq, and in some areas, particularly in Anbar province, it's working," Clinton told the same group of veterans in Kansas City that Mr. Bush had addressed.

It is a message that might not sit well with some Democratic voters, but Clinton and Obama seem to have calculated that a "hate the war but love the warrior" message might be important to win a general election. Meanwhile, other candidates, such as Dennis Kucinich and Bill Richardson, are still pushing just as hard for total withdrawal.

At a debate Sunday in Iowa, Richardson outlined his plan: "To end this war, we have to get all the troops out — all of them. Our kids are dying. Our troops have become targets."

Another candidate, Sen. Joe Biden, has long advocated partitioning Iraq. He has released a new TV ad in Iowa, saying the war must end according to his plan. In the ad, he recalls flying out of Iraq after one recent visit:

"As I climbed into the C-130, strapped into the middle of that cargo bay was a flag-draped coffin. It turned that cargo bay into a cathedral. And all I could think of was the parents waiting at the other end. We must end this war in a way that doesn't require us to send their grandchild back."

Biden knows well the tension between criticizing policy and supporting the troops — his son is deploying to Iraq next year.