Accessibility links
Gamers Find Gaps in China's Anti-Addiction Efforts Anti-addiction software is supposed to protect gamers under the age of 18 in China. But the software, which detracts points from game-players' scores if they don't take a break at certain points, hasn't been an unqualified success.

At an Internet bar in Shanghai, the majority of customers appear to be teenage boys. Vivian He hide caption 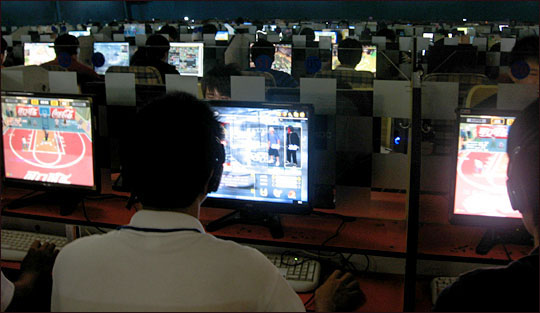 At an Internet bar in Shanghai, the majority of customers appear to be teenage boys. 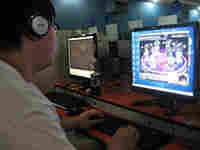 Xiao Wang, 15, admits that he spends five to six hours daily playing online games. He blames boredom and a lack of other leisure facilities to occupy him during his long, hot summer vacation. Vivian He hide caption

Imagine this: You're playing your favorite Internet game and, suddenly, a warning flashes onto the screen. You've been playing for three hours, it says, so it's time to get some exercise. If you ignore it, the total points you've won in the past three hours will be halved. After five hours of uninterrupted play, your points will be wiped out.

That's the scenario in China, where anti-addiction software is supposed to protect gamers under the age of 18. But it hasn't been an unqualified success.

One weekday night, about 30 anxious parents sit on plastic chairs in a hall, listening intently to a speaker. She's introducing a weeklong camp designed to wean their children off Internet games.

"If I restrict him, he only plays games for two or three hours a day. If I let him do what he wants, he'd play from the morning until night," says one mother, describing her struggle to control her 14-year-old son's game-playing time.

China's one-child policy has indirectly led to this problem – spawning a generation of spoiled, but lonely, only children. The burden of parental expectation upon these children is often intense – as was once the case with another mother and her 18-year-old son. He now plays games for 10 hours a day.

And these stories aren't unusual.

Step into any Internet bar, and it's full of young boys tapping away – many of them apparently under 18. If the state-run media is to be believed, China is experiencing an epidemic of Internet addiction among its youth.

One official report estimates that almost 6 percent of teenage Internet users — an astounding 3.5 million teenagers — are online more than 40 hours a week. That's why the government is requiring gaming companies to install anti-addiction software on their games to stop teens from playing too long.

"What I want to say is we need this for our company," says Jackie Zhuge, spokesman for China's biggest online gaming company, Shanda Interactive Entertainment. "It's social responsibility we have to take."

Last quarter, Shanda Interactive Entertainment earned the equivalent of $60 million. Zhuge denies that such software is the act of a nanny state.

"This system is good for the sustainable development of industry," Zhuge says. "Because these young players who are under 18 years old, they are not a major part of the game. But they are the future of our game."

Xiao Wang could fit that description; he's an articulate, intelligent 15-year-old. He's focusing intently on his game, SuperDancer, competing with five friends in an online dance contest. His avatar sways and kicks to the music.

Wang plays for five to six hours a day, a habit he blames on boredom, saying there's nothing else to do during the long, hot summer vacation. He says bluntly that the anti-addiction software isn't working.

Two weeks after the new rules went into effect, the government admitted that 29 online games had so far failed to install the anti-addiction system.

Wang's other favorite game, World of Warcraft, does include the software. But because he shares an online identity with his father and cousin, he doesn't use his own ID card, so the system has no way of knowing he's underage.

Wang says young Netizens are generally one step ahead.

"Whenever a new policy is set from above, ordinary people find ways to fight back. So we can always find our own ways to get around these restrictions," he says.

China now has 162 million Internet users. With 100 new users joining the online community every minute, China will overtake the United States as the country with the world's largest Internet population in just two years, officials say.