Accessibility links
Report: Iraqi Leaders 'Unable to Govern' The Iraqi government will become "more precarious" over the next six to 12 months and its security forces, while showing some improvement, still can not function without outside help. Those are a few of the sobering conclusions reached by American intelligence officials in a new report. 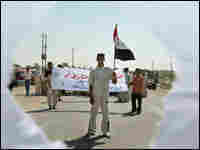 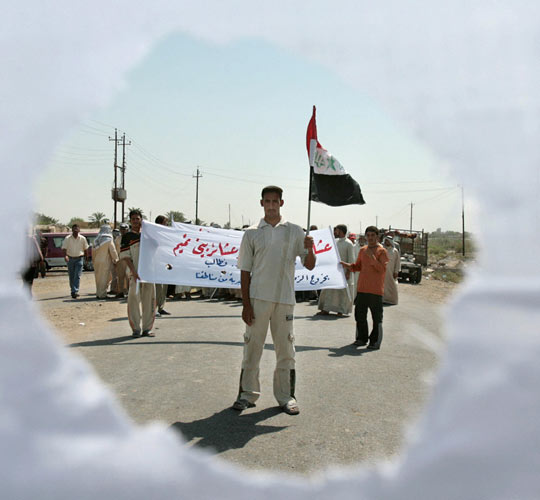 Demonstrators asked the government and coalition forces for better security in the neighborhood.

We assess, to the extent that Coalition forces continue to conduct robust counterinsurgency operations and mentor and support the Iraqi Security Forces (ISF), that Iraq's security will continue to improve modestly during the next six to 12 months but that levels of insurgent and sectarian violence will remain high and the Iraqi Government will continue to struggle to achieve national-level political reconciliation and improved governance.

Read more from the unclassified key judgments of the National Intelligence Estimate:

The Iraqi government will become "more precarious" over the next six to 12 months and its security forces, while showing some improvement, still cannot function without outside help, according to a report released Wednesday.

The 10-page document, a declassified summary of a more detailed National Intelligence Estimate, also concludes that Iraq's sectarian groups have yet to reconcile and al Qaida in Iraq is still able to conduct deadly—and highly visible—attacks.

The findings, though, did point to some signs of progress in Iraq, and they could bolster the Bush administration's argument that coalition forces need to stay in Iraq in order to avoid further chaos and bloodshed.

The report represents the collective judgment of all 16 U.S. intelligence agencies, including the CIA, Defense Intelligence Agency and the intelligence organization of each military service. It comes at a time of renewed tensions between Washington and Baghdad, and as the Bush administration prepares a mid-September report on how well its so-called surge strategy in Iraq is working.

As the debate over Iraq heats up, one vital question is how well Iraqi troops have performed. The intelligence report says that the Iraqi Security Forces, working alongside the United States, have performed "adequately." However, it also says they haven't shown enough improvement to conduct operations without U.S. and coalition forces, and are still reliant on others for key support.

Indeed, the report—the first on Iraq since President Bush introduced his new strategy for the war in January--provides fodder for both sides in the debate over what to do in Iraq. President Bush and his supporters are likely to highlight the relatively positive aspects of the report, such as the prediction that Iraq's security will continue to improve modestly during the next six to 12 months. Critics of the surge strategy, though, are likely to focus on assessments such as this: "Levels of insurgent and sectarian violence will remain high and the Iraqi Government will continue to struggle to achieve national-level political reconciliation and improved governance."

The report paints a dire picture of the situation in Iraq, but also warns of the consequences of a precipitous U.S. withdrawal, as President Bush has repeatedly done, most recently at a speech in Kansas City, Mo., on Wednesday. A sudden U.S. withdrawal, the report predicts, would lead to a flare up of sectarian violence and would "paralyze the [Iraqi] government."

U.S. Ambassador to Iraq Ryan Crocker and the top U.S. commander in Iraq, Gen. David Petraeus, are due to report next month on how much progress is being made with the buildup, which now has some 162,000 troops, the highest of the four-year-old war.

Democrats wasted no time responding to the intelligence report. Senate Majority Leader Harry Reid said the report confirms what most Americans already know: "Our troops are mired in an Iraqi civil war and the president's escalation strategy has failed to produce the political results he promised to our troops and the American people."

"Every day that we continue to stick to the president's flawed strategy is a day that America is not as secure as it could be," said Reid, a Nevada Democrat.

With additional reporting from the Associated Press.