Accessibility links
Mixed Martial Arts: Sport or Spectacle? A type of fighting that combines jiujitsu, taekwondo, wrestling and boxing, mixed martial arts has become big business, with a large and growing fan base. But its popularity concerns many people who say it's just too brutal. 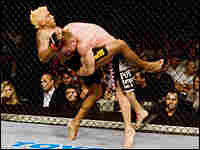 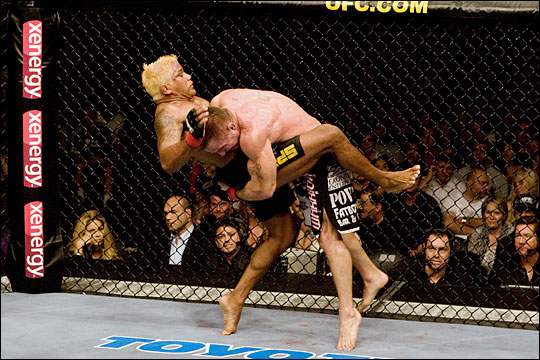 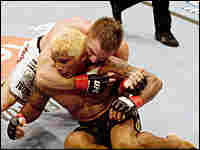 Sherk emerged victorious from the fight, but both he and Franca tested positive for steroids. Franca admitted to the drug use and has been suspended for a year. Sherk is appealing the ruling. UFC hide caption 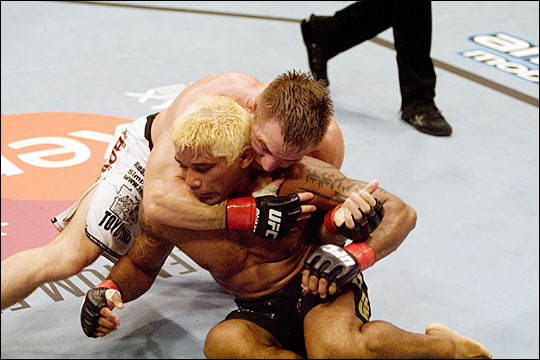 Sherk emerged victorious from the fight, but both he and Franca tested positive for steroids. Franca admitted to the drug use and has been suspended for a year. Sherk is appealing the ruling. 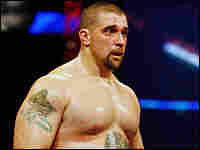 Bryan Vetell is the heavyweight for the New York Pitbulls team, one of 12 that compete in the International Fight League. It is one of the dozens of smaller mixed martial arts organizations. IFL hide caption 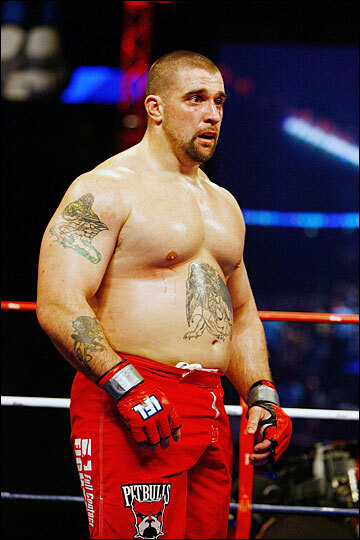 Bryan Vetell is the heavyweight for the New York Pitbulls team, one of 12 that compete in the International Fight League. It is one of the dozens of smaller mixed martial arts organizations. 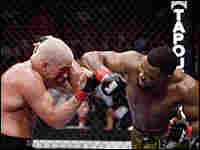 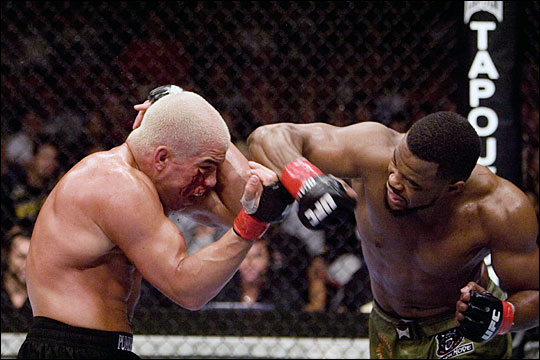 For fans of mixed martial arts, Saturday is a big day: UFC 74 Respect in Las Vegas.

It's the 74th fight night organized by the Ultimate Fighting Championship, or UFC.

Mixed martial arts has become big business, with a large and growing fan base. It's drawing larger audiences than old-fashioned prizefighting, and its popularity is worrying many people, who say it's too brutal.

For the uninitiated, mixed martial arts is a type of fighting in which anything that's legal in jiujitsu, taekwondo, wrestling or boxing is fair game — for example, punching, grappling, kicking and choking.

More than 14,000 people — some of whom paid $500 for tickets — attended the event in Sacramento, Calif. UFC matches take place in an octagon ring, surrounded by a 6-foot-high, padded chain-link fence.

In a typical fight, Keith tells Robert Siegel, "One minute they're boxing, then all of sudden, somebody kicks the other guy in the neck, and then they'll be rolling around on the ground, wrestling. There are a bunch of different holds, like the triangle hold, the guillotine, the rear naked choke."

The match ends with a guy passing out or "tapping out" — acknowledging he yields to his opponent by tapping on the mat or on his opponent.

Keith says audience members she sat with — all devoted fans, some of which likened the fighters to "gladiators" — seemed unfazed by blood dripping off competitors. She also observes that the audience didn't seem content with boxing, but "a high kick or a takedown, and everyone goes crazy."

The event brought in more than $1.5 million; the UFC won't release the number of people who tuned in via pay-per-view , but Sports Illustrated reported that last year, the UFC brought in $223 million in pay-per-view broadcasts.

Mixed martial arts has its detractors, among them Stephen Acunto, a longtime member of the New York State Athletic Commission.

All his life, Acunto has loved, taught and coached boxing. Mixed martial arts may be drawing bigger audiences now, but unlike boxing, Acunto says, it's not a sport.

"It attracts more people because I think it satiates the barbaric pleasure of people who like to see someone hurt," Acunto says. "I think they would watch cockfighting, bullfighting, dogfighting and anything of that nature."

Acunto says that in his opinion, no rules or regulations would ever turn mixed martial arts into a true sport.

The rules to which Acunto refers have been adopted in recent years, and they have served to get mixed martial arts widely sanctioned.

In the early 1990s, when the UFC was just getting started, there were no weight classes and it was virtually "anything goes" — only a few moves were barred, such as eye-gouging and groin shots.

At the time, Sen. John McCain (R-AZ) called mixed martial arts "human cockfighting," and called for it to be regulated by an athletic commission.

Dana White, the current president of the UFC, has overseen these changes.

"When we bought [the UFC], we felt ... that these guys are athletes, this is a sport, and this does need to be sanctioned. So we ran toward the regulation, not away from it. At the end of the day, there are more people who would rather watch a sport than watch a spectacle," White says.

Detractors point to the seeming ruthless brutality of the fights — for example, eight or nine consecutive blows to the face of a competitor who's pinned to the ground on his back.

"The reality is, you hit a man, standing up, with a lot more force than you can when the man is on the ground.

"We could sit here all day and debate on how safe this is or how unsafe that is. There really aren't very many sports out there that there aren't any deaths in. There's never been a death in the UFC; [in] polo, [you] can't say that. You'd be surprised to hear how many kids die every year playing high school football," White says."

Despite the fact that two fighters tested positive for steroids at the UFC match in Sacramento, White says he "would not say there's a drug problem in mixed martial arts."

"There is not a problem with steroids. Have we had guys who've tested positive for steroids? Absolutely. But I'd say for the amount of fights that we have, and the amount of athletes we have under contract, it hasn't been very bad. Our guys have been pretty good about that," White says.

White did enough to clean up Ultimate Fighting that Sen. McCain has softened his critique.

"They have cleaned up the sport to the point, at least in my view, where it is not human cockfighting any more. I think they've made significant progress. They haven't made me a fan, but they have made progress," McCain tells NPR.

The truth is, between the headline bouts and the reality TV show The Ultimate Fighter, Dana White's UFC has plenty of other fans.

"We're not only the largest pay-per-view provider in the United States — beating HBO Boxing and the WWE — but we're also one of the highest-rated television shows on cable," White says.

Bryan Vetell — who is 6 feet 1 inch tall and weighs 260 pounds — is the heavyweight for the New York Pitbulls.

"We get a lot of freaks, a lot of weird people. If you like to fight, you like getting punched in the face all day, maybe you're not the most normal person on earth," says Vetell, who was a philosophy major at Hofstra University.

He dismisses concerns about getting injured.

"If that's what you're worried about, you shouldn't fight. You're with a referee whose main job it is to protect your health, you have good corner men, good coaches," Vetells says. "Any accident could happen, but I could step in the street and get hit by a car, I live in New York. It's not unheard of."

But many people are concerned about safety, as states debate whether and how to regulate mixed martial arts.

Dr. Joseph Estwanik, an orthopedic surgeon who helped get mixed martial arts legalized in North Carolina, also helped develop the glove that brought the Ultimate Fighting Championship out of the bare-knuckle era.

He says very few fights end with a knockout punch, which is far more harmful than an unsightly laceration.

Injuries in mixed martial arts may be more "graphic," Estwanik says, but they are "treatable, fixable and temporary."

He says there has not been enough study of mixed martial arts to describe the risks.

Rather than outlaw mixed martial arts, Cantu says he would prefer to see it carefully licensed, and also to see careful observation of the injury patterns.

"I think it's very important that that data be obtained, especially because this is an activity that society in general seems very much interested in doing," Cantu says. "I think if you were to outlaw it ... it would still go on, it would just be without supervision."

Fighter Bryan Vetell defends mixed martial arts — but balks at the notion of making it a high school sport.

"I don't know if I have the maturity to handle what I'm doing right now, so I don't know if a 15- or 16-year-old should really be doing it," Vetell says.

Vetell acknowledges that high school students participate in other dangerous sports, such as football and wrestling. But mixed martial arts is different.

"But the idea of what you're doing is, I mean, you're beating somebody up. You know, that's what you're doing. I mean, I think the kids should train [for] it, but I don't know if there should be a competitive aspect to doing that. I just don't think so," Vetell says.

Inside the Underground World of Dog Fighting July 19, 2007
Retro Sports Win Top Billing May 9, 2007
Boxing's Biggest Name Goes Against its Best Fighter May 5, 2007
An Inside Look at Professional Wrestling April 5, 2007
California Lifts Ban on Mixed Martial Arts March 23, 2006
Making Something Out of the 'Fight Club' Trend July 30, 2005