Accessibility links
Arizonans, Border Patrol Clash over Checkpoint Residents of southern Arizona oppose a Border Patrol plan to build a permanent vehicle checkpoint on Interstate 19, about 30 miles north of the U.S.-Mexico border. They say the checkpoint disrupts business and sends illegal immigrants into their communities. 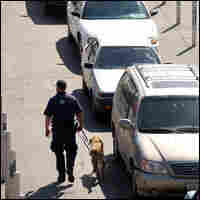 On Interstate 19, the main corridor from Nogales, Ariz., to Tucson, drivers encounter a series of temporary barricades that cause them to slow down and eventually stop. They roll down their windows and pull up to a Border Patrol agent. The agent asks them their citizenship, where they're coming from and where they're going.

The U.S. Border Patrol has 34 permanent vehicle checkpoints on major highways from California to Texas, but the one on I-19 is temporary. Local and Congressional pressure has kept it moving every week or two for the last eight years. That makes I-19 the only major highway in the region without a permanent checkpoint. It's also in the middle of the busiest corridor for smuggling drugs and illegal immigrants across the U.S.-Mexico border.

The Border Patrol wants to build a $30 million permanent checkpoint near here. Late last year, Congress voted to authorize it.

The Border Patrol's Tucson Sector Chief, Robert Gilbert, says the checkpoint is needed to catch smugglers who make it past the border. The checkpoints are effective, Gilbert asserts, and part of an in-depth strategy.

But many people who live in nearby towns oppose the permanent checkpoint. They say that even the temporary ones just force smugglers off the highway and into their communities. Nan Walden, a lawyer and pecan farmer, is part of a study group that looked at existing permanent checkpoints, like one near Laredo, Texas.

"We talked to people that have lived with checkpoints for 30 years," Walden says. "The crime, the smuggling, the violence is increasing. It's a no man's land between the border and these checkpoints and they keep moving the checkpoints north."

Walden's husband, Dick, cites one in New Mexico that is 95 miles north of the border. That's just giving up land to the smugglers, he says, adding that border patrol operations belong on the border.

"We as a sovereign nation need to draw that line at the border and be safe north of the border," Walden says.

The Border Patrol responds to the opposition by pointing to the thousands of illegal immigrants and tons of drugs caught every year at checkpoints far from the border.

But to Nan Walden, that proves nothing.

"They can give the statistics all day about how many people they catch and how many pounds of drugs," she says. "They don't tell you how many get around."

Two years ago, a Government Accountability Office report said there is no evidence that checkpoints are any more effective than other strategies or that they keep smugglers out of surrounding areas.

Chief Gilbert says he'll look for facts to support what he knows is true.

"I'm going to go start looking into that immediately," he says. "I know we've mitigated crime in other neighborhoods and in communities."

In Washington, a Border Patrol spokesperson says the agency has just recently started studying the issue.

Democratic Congresswoman Gabrielle Giffords, who represents the area, hasn't made up her mind whether to support the new checkpoint. But she acknowledges that despite the local opposition, she still may vote in favor.

"My job isn't to make people happy," Giffords says. "My job is to craft policy that really works in the best interest of southern Arizona."

While Congress has authorized a permanent checkpoint, it hasn't yet appropriated the $30 million to build it.

Many Border Patrol Recruits Live Far Away July 6, 2007
The View from Arizona, Scenes from the Border April 12, 2007
Freshmen Lawmakers Take District Temperatures April 9, 2007
On Mexican Border, U.S. Military Low-Key May 15, 2006
Far from the Border, an Immigration Crackdown in California June 20, 2004