Accessibility links
Fringe Fest 'Jihad' Musical Touches Explosive Topics While audiences at the Edingburgh Arts Festival praise the politically incorrect plot and lyrics of 'Jihad: The Musical,' some Muslims fear that the play undermines their attempts to disconnect from the terrorist stereotype. 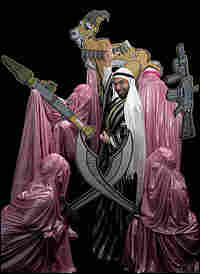 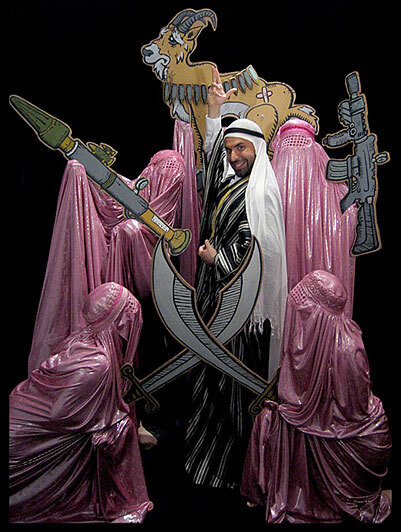 Courtesy of 'Jihad: The Musical'

Jihad the Musical's 12 original tunes include the two below: "I Wanna Be Like Osama,"sung by a middle-management terrorist with dreams of bigger things, and "Turned and Ran," a tune for a surrender-prone Frenchman named, of course, Jacques.

The Edinburgh Festival is the largest arts festival in the world. Competing for attention during the month of August in the Scottish capital is the Fringe Festival, which gives amateur theater productions and stand-up comedians a chance to make a name.

One of this year's big draws has been a widely talked about American production called Jihad:The Musical. The show has received rave reviews from audiences, but some Muslims say it undermines their efforts to disconnect from the terrorist stereotype.

If we're supposed to be living in the age of political correctness, someone forgot to tell the writers of Jihad: The Musical.

Billed as a madcap gallop through the wacky world of international terrorism, it tells the story of Afghan peasant Sayid al Boom.

Despite the best efforts of his sister Shazzia, Sayid is recruited by a smooth-talking Islamic fundamentalist in a pinstripe suit: Hussein Al Mansour.

Hussein, played by New York actor Sorab Wadia, lights up the stage with a chorus line of high-kicking women in pink burqas, singing "I Wanna Be Like Osama":

I wanna bomb a path to fame across the Earth.

People may abhor me but by God, they won't ignore me

When the CIA determines what I'm worth.

But Osama Saeed of the Muslim Association of Britain says Muslims are weary of being associated with terrorists, even in jest.

"Muslims are urged to condemn terrorism more and more, and we do that. But when people try to fuse us together with terrorism, it's terribly frustrating because it sets us back," Saeed says.

And the Edinburgh audiences seem to think the subject is fair game for satire.

"It's terrorism," Jackie Broadfoot says after seeing the show. "We shouldn't be cowed into living our lives in fear. We shouldn't have to do that. There should be freedom to laugh at religion; it's not a holy cow."

"I thought it was fantastic," Davidson says. "There is a shockingly ridiculous, stupid side to it, and making you laugh at it makes you think about it in a different light."

The show's satire isn't reserved just for terrorists. The naïve Sayid travels to America, as well.

There, he meets a cable news reporter named Foxy Redstate. Foxy needs a big scoop about the dangers of terrorists in order to get the anchor job she craves.

As the musical goes on, the American right-wing media is skewered by Scheuer and his co-writer Zoe Samuel.

Scheuer, a 25-year-old writer and musician from New York, says he's not equating the American right with terrorists, but in the show's final duet, he is saying they need each other.

"Hussein Al Mansour, the terrorist, and Foxy Redstate realize that to get the fame they want, Hussein is going to plant the bomb and Foxy will film it," Scheuer says.

I was foolish to doubt you because I can't live without you,

You're the best opposition for my cause, you're the nemesis I dream of,

You're the reason that my team of angry millions wave their flags and give me rabid applause.

And we are finally going to be in a holy war alliance where we are guaranteed compliance with religion over science, we're the overarching giants.

There's a line that we're both selling and it's perfectly compelling for the audience who will hate you by default.

The show runs through Aug. 27, when the cast heads back to the United States to try to stage it in New York.