Accessibility links
U.S. Weapons from Iraq Making Their Way to Turkey Turkish police say there is a growing black-market trade in the country of U.S.-issued weapons from neighboring Iraq. The Turkish government has said it has found high numbers of weapons that appear to be from the United States in the hands of captured Kurdish separatists.

Listen
U.S. Weapons from Iraq Making Their Way to Turkey

Police in the Turkish border town of Mardin display 18 Glock handguns that were captured from smugglers near Turkey's border with Iraq and Syria. The police chief says the pistols are American-issued, distributed to Iraqi security forces and then sold to arms dealers in northern Iraq. Volkan Seker for NPR hide caption 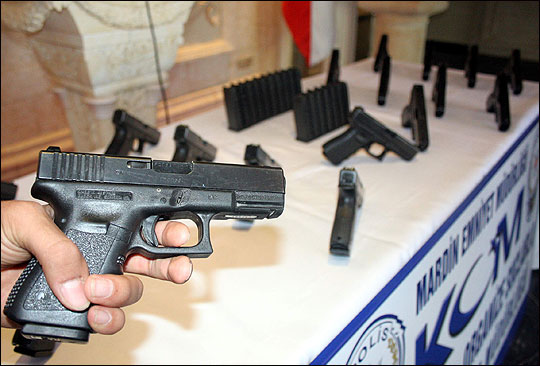 Police in the Turkish border town of Mardin display 18 Glock handguns that were captured from smugglers near Turkey's border with Iraq and Syria. The police chief says the pistols are American-issued, distributed to Iraqi security forces and then sold to arms dealers in northern Iraq. 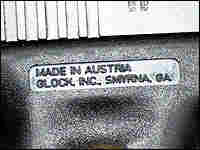 A close-up view of the markings on one of the Glock pistols that the Turkish police say is evidence of the growing black-market trade of U.S.-issued weapons from Iraq. Volkan Seker for NPR hide caption 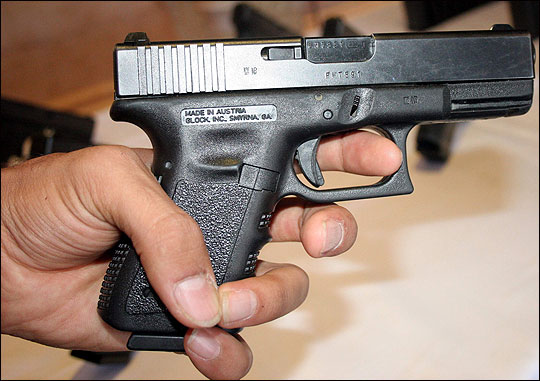 A view of the markings on one of the Glock pistols that the Turkish police say is evidence of the growing black-market trade of U.S. weapons from neighboring Iraq.

Turkish police displayed evidence this week of what they say is the growing black-market trade of weapons of U.S. origin being smuggled across the border from neighboring Iraq.

In the border town of Mardin in southeastern Turkey, officers unwrapped 18 Austrian-made Glock pistols and laid them on a table. Mardin Police Chief Ismet Tasan said the guns were originally donated by the U.S. military to the Iraqi police. The pistols were later sold to arms dealers in northern Iraq for more than $1,500 apiece and then smuggled to Turkey, where they can be resold for prices as high as $5,000.

"Sixty of the 140 guns captured by our team in the last six months are Glocks," Tasan told reporters. "We have observed an increase in the demand for these weapons."

Turkish officials say this seizure is just the tip of the iceberg.

Last month, the Turkish government announced it was finding disturbingly high numbers of weapons of apparent American origin, including Glock pistols, AK-47s and M-16s, in the hands of captured Kurdish separatists from the Kurdistan Workers Party, or PKK.

The PKK has battled the Turkish state since 1984, operating from camps in mountains along the Iraqi border. Both the United States and its NATO ally, Turkey, officially label the PKK a terrorist organization.

"When we searched the origin of the weapons that were seized on some of the terrorists, we noticed that these are the [same] ones given to the Iraqi army," Turkish Foreign Minister Abdullah Gul said in a television interview on July 16. "We asked for clarification from the Americans."

Professor Ihsan Bal, a terrorism expert from the International Strategic Research Center in Ankara, says that "terrorists are ending up with American weapons." Like top Turkish government officials, he stopped short of accusing the United States of directly arming the PKK. Instead, he blamed the small-arms proliferation on American negligence and mismanagement.

But, Bal added, with American popularity among Turks at an all-time low, "quite a number of people are ready to believe that America might have directly [given these] weapons to the terrorist organization."

"We do not do business with the PKK," responded Pentagon spokesman Geoff Morrell. "We don't talk to them [or] deal with them, let alone arm them as a matter of policy."

Last July, the Department of Defense sent its top lawyer, William J. Haynes, to Ankara to meet with Turkish officials. A Pentagon spokesman said the U.S. government is investigating the Turkish allegation, along with revelations in a recent U.S. Government Accountability Office report that found the Department of Defense cannot account for 190,000 pistols and rifles that were distributed to Iraqi security forces during the first two years of the U.S. occupation.

"There is a very large, wide-ranging investigation underway to try to get to the bottom of a number of issues," Morrell said. More than a month after the investigation was launched, the Pentagon said it is still too soon to confirm or deny the allegations that the PKK is using American-issued weapons from Iraq.

Speaking on condition of anonymity, however, U.S. government officials stationed both in Washington and in the Middle East said it is possible that thousands of weapons given by the United States to the Iraqi army and police have slipped into the black market and into the hands of arms smugglers and terrorists operating in neighboring countries like Turkey.

"I think the U.S. certainly didn't intend for its weapons that it provided to Iraqi security forces to end up in the hands of criminals and insurgents in other countries," said Rachel Stohl, an analyst specializing in the illegal arms trade at the Center for Defense Information in Washington.

Stohl said the proliferation of American weapons across the region is an unfortunate consequence of the U.S. forces' rush to arm Iraqi security services.

"Weapons from Iraq can certainly have a devastating effect on countries in the region," Stohl explained. "They can be used for crime and violence, to assist insurgencies or opposition groups in various countries, and in some cases may actually be used to destabilize governments."

In Baghdad, a high-level official in the Iraqi Ministry of Interior described, also on condition of anonymity, an elaborate system to divert weapons from Ministry of Interior facilities to local arms traffickers and militias. The official claimed large quantities of American-supplied weapons, including M-16s, MP-5s, MP-4s and Glocks, were being sold and, in some cases, exported to neighboring countries.

"It's not just guns that are slipping over the border and into general circulation," said Hugh Pope, a senior analyst with the International Crisis Group in Turkey. "It's also explosive materials; it's also guerilla techniques that are being used by the Kurdish rebels in Turkey that have clearly been copied from the successful tactics of insurgents in Iraq — like roadside bombs. I think that the guns are just a symbol of a larger problem."

Scores of Turkish soldiers and gendarme have been killed this year and many more wounded as part of a recent upsurge in fighting with PKK guerillas. Often, these fatalities involve roadside bombs.

The Turkish military has repeatedly called for a cross-border military operation to attack PKK camps in northern Iraq. Washington has urged the Turks to hold back, arguing that an incursion would only further destabilize the region.

In the meantime, smugglers continue to ship American-issued weapons across the border — yet another unintended consequence of the U.S. occupation of Iraq.