Accessibility links
Ethan Hawke's 'Hottest State' Is No Vanity Project Ethan Hawke's film, based on his own semi- autobiographical novel, centers on a young actor and a beautiful singer; when they break up, he flees to his Texas homeland. 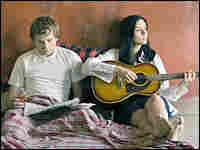 The clumsiness and anxiety of young love — as manifested by William (Mark Webber) and Sarah (Catalina Sandino Moreno) — are at the center of The Hottest State, directed by Ethan Hawke. ThinkFilm hide caption 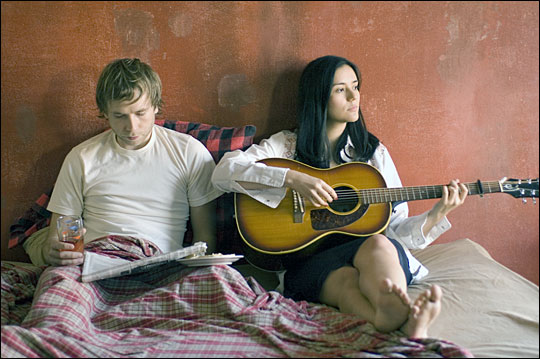 The clumsiness and anxiety of young love — as manifested by William (Mark Webber) and Sarah (Catalina Sandino Moreno) — are at the center of The Hottest State, directed by Ethan Hawke.

Listen to a story about the movie's all-star soundtrack.

The Hottest State centers on William (Mark Webber), a 20-year-old actor from Texas. He has moved to New York to get work, and to get a life. But he's socially inept, so getting a life is giving him trouble.

When he spots a lovely young singer named Sarah (Catalina Sandino Moreno) in a bar, his pickup line involves Star Trek and replicants — an awkward enough start that Sarah just stares at him, and he wonders if she even speaks English.

When she says she does, and then asks him if he's nervous, he initially says no, but then confesses to being nervous all the time. She says she is too.

So William walks Sarah home, can't get her out of his head, and feels, in that insane way of someone who has just fallen head over heels, as if his life is just beginning.

After much feverish wooing, he convinces Sarah to move in with him, and she agrees, provided that they don't have sex. Frustrated but happy, he lies next to her in bed just staring at her sleeping form all night, and mooning over his good fortune.

With William so puppyish and eager, Sarah's reserve starts to melt, and soon their romance feels as charged as it would in real life — possibly for a reason. Ethan Hawke, an actor who is himself from Texas by way of New York and Hollywood, wrote the semi-autobiographical novel The Hottest State.

He also adapted it, directed it, and even cast himself as William's father in it, all of which makes it sound like the ultimate vanity project. But there's a basic truth to the film's observations about the clumsiness and anxiety of first love.

Hawke gets lovely, nuanced performances from his two leads, and surrounds them with equally sharp performers in support — Laura Linney and Sonia Braga as differently damaged moms, and himself as a deadbeat dad back in Texas (the hottest state) who wasn't there when his actor/son was young and trying to figure out passion (the hottest state).

Much as Hawke orchestrates the early love scenes so that they ache with longing, he makes his father/son scenes with Webber ache with sorrow and forgiveness. You can see in his eyes that neat resolutions aren't in the cards for these characters, but that growth is. The film is proof.

'The Hottest State' Gets an All-Star Soundtrack

'The Hottest State' Gets an All-Star Soundtrack 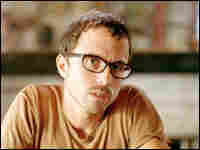 Jesse Harris wrote the Hottest State soundtrack in its entirety, and enlisted a star-packed roster to perform it. hide caption

Songs from 'The Hottest State'

'Always Seem to Get Things Wrong' by Willie Nelson

'It Will Stay with Us' by Jesse Harris

'Somewhere Down the Road' by Feist

When Ethan Hawke was in the process of adapting his novel The Hottest State into a film, the writer/actor/director turned to longtime friend Jesse Harris to assemble its all-important soundtrack. Rather than merely write an orchestral score and compile an assortment of other artists' songs, Harris wrote the soundtrack in its entirety and enlisted a star-packed roster to perform it.

The Hottest State's soundtrack — integral to the movie's plot — contains a handful of Harris' own performances, as well some of his score. But the album is especially notable for the exclusive performances by its guests, who include Willie Nelson, Norah Jones, Feist, Emmylou Harris, M. Ward, Cat Power and others. Harris commissioned the covers himself, even coaching Nelson through a recording session in which the country legend showed up, heard the song for the first time and nailed the finished version on the third take.

Harris, who also released a new studio album (Feel) earlier this summer, recently sat down to discuss his involvement in the film — he also appears as an actor — as well as the process by which he wrote and commissioned its music.