Accessibility links
'September Dawn' Jon Voight stars in a handsome but ham-fisted melodrama about the Mountain Meadows Massacre, the Sept. 11, 1857 slaughter of California-bound pioneers by a group of Mormons. Based on an actual event, but fictionalized. 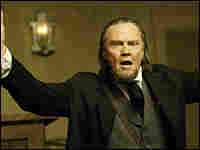 Jon Voight stars in a handsome but ham-fisted melodrama about the Mountain Meadows Massacre, a Sept. 11 slaughter of Christian innocents that had its roots in religious extremism. Never heard of it, you say? Well, it was a different Sept. 11 — the one 150 years ago next month, in fact — and it was in the territory that would become the state of Utah. And the extremists, depicted here as paranoid, bloodthirsty and prone to speechifying, were Mormons.

For dramatic purposes, the filmmakers have cooked up a fictional Mormon rabble-rouser (Voight) whose handsome son (Trent Ford) is the film's token conscience-stricken Latter-day Saint. The lad falls for a pretty settler on a passing wagon train headed for California, and is planning to leave the community with her when his father orchestrates a cataclysmic attack in which the all the settlers are disarmed and then slaughtered.

The film hints broadly that Mormon patriarch Brigham Young (Terence Stamp) himself had a hand in planning the massacre, which is an actual historical event, however freely it's being depicted here. September Dawn's producers are presumably counting on disputes about the accuracy of that depiction, as well as broader protests from the Mormon community, to help publicize the film — which is beautifully photographed and almost stupefyingly didactic.