Accessibility links
'Mr. Bean's Holiday' Rowan Atkinson says this is your last chance to catch Mr. Bean, and you should; a couple of Buster Keaton-ish bits, including an improvised and improbable staircase that gets Bean to the beach in France, are pretty inspired. 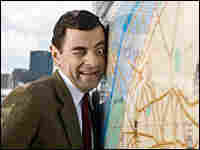 When it comes to planning a travel itinerary, Rowan Atkinson's Mr. Bean can be counted on to take the hard road. Universal Pictures hide caption

The actor Rowan Atkinson has said this will be the final appearance for his bumbling, befuddled Mr. Bean, which is as good a reason as any to catch what amounts to an only intermittently amusing jaunt through French tourist spots.

In the opening reel, Mr. Bean wins an all-expenses-paid vacation; then, of course, he proceeds to make a mess of things at every stop along the way. He eats oysters (pretty hilariously) in Paris, joins forces with a little boy (after inadvertently making the boy's father miss the train), then gets himself and the boy thoroughly mired in the countryside before arriving at a decently funny final sequence at the Cannes Film Festival.

The physical gags generally require so much setup that the film often seems to be marking time between chuckles, but the payoff certainly is fun. And a couple of Buster Keaton-ish bits — especially an improvised, impromptu, pleasantly improbable staircase that materializes to take Mr. Bean to the beach — are pretty inspired.