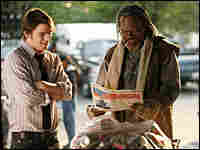 Erik (Josh Hartnett) is a Denver sportswriter who can't catch a break with his editors until he meets a broken-down homeless guy (Samuel L. Jackson) who hasn't caught many breaks since he was a 1950s prizefighter. Erik figures, more than a little cavalierly, that he has a career-making story in this guy, that he'll win back his estranged wife (who's also a journalist) and that he'll finally be a good dad for his 6-year-old kid.

And except for human failings, all of that might be true. Alas, Erik proves lazy and way too casual about his research, and so gets sucker-punched by the facts. The story hinges on father/son relationships — the old fighter's with his kid, Erik's with his 6-year-old, and Erik's with his late dad, a legendary sports broadcaster whose rep he struggles to live up to.

The film is based loosely on fact; it's smartly edited (the fight flashbacks are effective), and when Jackson is center-screen, bobbing and weaving, taking punches from younger bullies and telling tales in a whiskey-soaked falsetto rasp, it's pretty engaging.

That it's not the knockout it wants to be is due mostly to the fact that when Erik's the focus — and director Rod Lurie keeps insisting that his struggle is the central one — the whole story stumbles.