Accessibility links
Greek Wildfires Threaten Ancient Olympia Firefighters in southern Greece are battling a massive blaze that threatens to destroy the ancient city of Olympia, the site of the world's first Olympic games. At least 57 people have been killed in the wildfires. 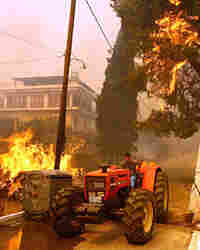 A man drives a tractor past burning vegetation in Platanos, near the site of Ancient Olympia. Louisa Gouliamaki/AFP/Getty Images hide caption 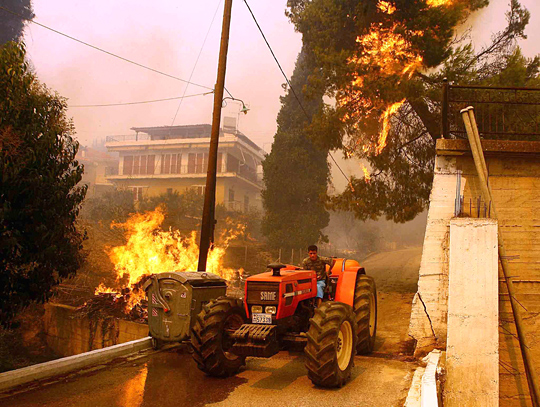 A man drives a tractor past burning vegetation in Platanos, near the site of Ancient Olympia.

Firefighters in southern Greece on Sunday battled a massive blaze that threatens to destroy the ancient city of Olympia, the site of the world's first Olympic games.

A large wall of flames was just at the edge of the village of Ancient Olympia, which stands near the 2,800-year-old site itself. Police blocked roads, and firefighting planes flew overhead.

"The winds are so strong that I don't know whether the site's sprinkling system will stop it," said Costas Sofianos, deputy mayor of Ancient Olympia. Although the sprinkler system was activated, not all of it appeared to be functioning.

The fire department said some trees at the sprawling site had burned, but that the museum was safe. The ancient stadium and other monuments were so far unaffected.

The wildfires have raged for three days, engulfing villages and forests and killing at least 57 people.

The fires are the worst in Greece in decades. On Sunday, five people died in a new blaze on the island of Evia, including a woman whose body was found in a village near Ancient Olympia.

"It's hell everywhere," said Costas Ladas, who said the fire covered more than a mile in three minutes. "I've never seen anything like it."

Authorities are using every means possible — by land and sea — to evacuate hundreds of people who have been trapped by flames in villages, hotels and resorts.

In the early morning, church bells rang out in nearby Kolyri as residents gathered their belongings and fled through the night. Villagers returned to find at least seven gutted houses.

Fotis Hadzopoulos, a resident, said the evacuation was chaotic. "Children were crying, and their mothers were trying to comfort them, " he said.

The worst of Greece's fires - 42 major fronts - were concentrated in the mountains of the Peloponnese in southern Greece and on Evia north of Athens. New fires also broke out Sunday in the central region of Fthiotida - one of the few areas that had been unscathed, fire department spokesman Nikos Diamandis said.

Arson has been blamed in several cases, and seven people have been detained.

Although a temporary drop in the ferocity of high winds early in the morning provided brief respite in Ancient Olympia, they intensified later in the day.

"Unfortunately the improvement that we were looking for is not there," Diamandis said. "Our target is for the fire not to enter Ancient Olympia, not to destroy antiquities."

The Culture Ministry said "all means are being used, and all necessary measures have been taken" to save the site, and that the army had been called in to create a fire break.

The fire blazed into the nearby village of Varvasaina, destroying several houses. As residents rushed to battle the flames, others, stunned, walked the streets holding their heads in their hands.

Across the country, churchgoers prayed for the blazes to abate.

"Fires are burning in more than half the country," Diamandis said. "This is definitely an unprecedented disaster for Greece."

Elsewhere, flames were less than two miles from the Temple of Apollo Epikourios, a 2,500-year-old monument near the town of Andritsaina in the southwestern Peloponnese, said the town's mayor, Tryphon Athanassopoulos.

"We are trying to save the Temple of Apollo, as well as Andritsaina itself," he told Greek television.

A separate blaze had abated Sunday in Kalyvia, an area between Athens and the ancient site of Sounion to the south.

In the ravaged mountain villages in the Peloponnese, rescue crews on Saturday picked through a grim aftermath that spoke of last-minute desperation as the fires closed in.

Dozens of charred bodies have been found across fields, homes, along roads and in cars, including the remains of a mother hugging her four children.

The worst-affected region was around the town of Zaharo, south of Ancient Olympia. Thick smoke, which blocked out the summer sun, could be seen more than 60 miles away. The blaze broke out Friday and quickly engulfed villages, trapping dozens of people and killing at least 37. Scores of people were treated in hospitals for burns and breathing problems.

The government, which has declared a nationwide state of emergency, announced Sunday it would offer up to $13,000 to people who lost relatives or property.