Accessibility links
Building a Better Burger From its humble beginnings as Hamburg steak or "salt beef" favored by European immigrants to the United States, the burger has morphed into an all-American dish with countless varieties. Kevin Weeks shares some of his favorites. 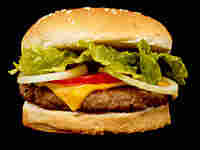 Burgers range from bland, tasteless patties to upscale creations of Kobe beef, foie gras and truffles. Simple tricks can make even the most ordinary burger into something sublime. iStockphoto hide caption 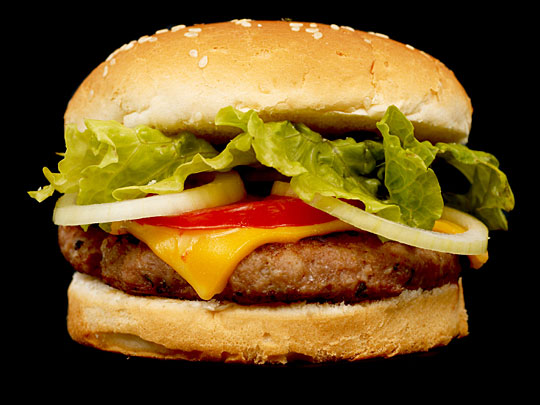 Burgers range from bland, tasteless patties to upscale creations of Kobe beef, foie gras and truffles. Simple tricks can make even the most ordinary burger into something sublime.

Burgers are the ultimate American food. Not those stale, thin, tasteless patties found on every corner in every city. No, the true burger is thick, full of flavor, the meat just ground, the buns fresh.

A great burger offers simple but powerful flavors. It's hot and easy to chew, and the juices drip down your chin, sending an atavistic memory of primal feasts racing through your nerves. If the burger is particularly good, you might catch yourself snorting in pleasure, thoughtlessly licking a finger, or grunting an answer to a question.

But imagine ordering a hamburger and getting a bill for $124.50 — without tax, tip or beverage (I don't know if you get fries with that). This particular burger is served at the Florida's Boca Raton Resort and Club and is made using two 10-ounce patties of Kobe beef. If you want to economize on your premium burger, DB Bistro in New York offers a burger that does come with fries, truffles and foie gras for $29.

For the past few years, burgers have been going upscale — way up the scale. But the trend dates back to the late 1960s. One of the first places to popularize fancy burgers was Ruby Tuesday, which started in Knoxville, Tenn. In fact, the second Ruby's opened two doors up from the Pier 1 Imports where I worked, and Sandy Beall, the chain's founder, bought much of the décor for his subsequent restaurants from me.

Ruby Tuesday's original menu featured items such as a burger with bacon and a rarebit-like sauce, and a burger topped with mushrooms sautéed in wine. These early Ruby Tuesday burgers were served on English muffins (also unusual) and were meant to be eaten with a knife and fork.

Sometimes, though, you need something more than a basic burger. One easy way to raise the stakes, so to speak, is to use steak and grind it yourself, or ask your butcher to do it.

If you're going that route, you might as well go all the way and use something like rib eye, which has a rich, meaty flavor and good marbling to produce a moist burger. It won't be cheap, but it won't be $30 a burger, either.

A less-expensive way to make a burger special is to flavor the beef patties, use something other than beef, or do both.

Fair warning: There are purists who argue that anything other than a beef patty is not a hamburger. One such conservative told me my bacon and Parmesan burger is really a sausage patty because it's made with pork. Some fundamentalists even maintain that adding anything to the ground beef is apostasy. I ran across a comment on a recipe for a beef burger that contained chopped onions and pickles, decrying it as "meatloaf."

Our modern hamburger seems to have originated in Germany as the Hamburg steak. The 1802 Oxford English Dictionary defined Hamburg steak as salt beef. This was a hard slab of salted, minced and sometimes smoked beef mixed with onions and breadcrumbs. This preserved meat was a staple for trans-Atlantic voyages; the goal was preservation, not flavor. Immigrants, who ate it on their way to the United States, began making it with fresh meat when they reached this country.

The origin of the modern burger served on bread is less certain; there are several stories about its genesis and little documentation. Whatever the origin, Hamburg steak seems to have provided the name, and ground beef became the standard.

But must you use ground beef for it to be a burger? I think not. My take on it is that a burger is composed of some sort of ground meat, formed into a patty, cooked and served in sandwich form. It may not be a true hamburger, but it is a burger. And besides, as long as it tastes good, who cares? 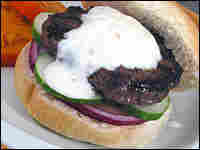 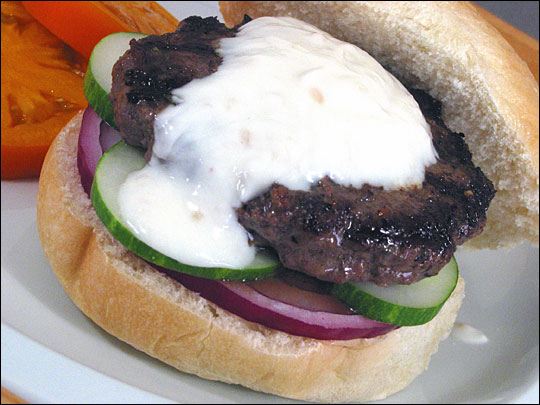 I started with marinated chuck that I then ground, but the burger wouldn't hold together — too moist. I ended up adding the marinade ingredients (at a fraction of marinade quantities) to already-ground beef and then letting it age for a few hours in the refrigerator. The thinly sliced cucumbers, red onion and tzatziki really enhance the flavors. Serve on a Kaiser roll.

Thoroughly mix together all of the burger ingredients, form into patties, wrap separately in plastic, and refrigerate for at least 4 hours and as long as 24 hours to allow flavors to meld.

Mix together all of the tzatziki ingredients and chill.

Grill burgers over medium heat for 4 to 5 minutes per side, or cook in a skillet or on a griddle, lightly brushed with oil if it's not non-stick, over medium-high heat for the same amount of time. Serve on a bun with tzatziki sauce, thinly sliced cucumbers, and red onion.

*Juniper berries are the berries from a relative of the juniper shrubs used in landscaping. They have a delicious resinous flavor and can be found at upscale markets. If you can't find them, increase the minced rosemary to 1 1/2 tablespoons.

**Greek yogurt is thicker than most commercial yogurt. If you can't find it, drain regular plain yogurt in a couple of folds of cheesecloth in a sieve over a bowl for 6 hours. 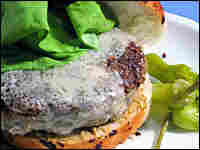 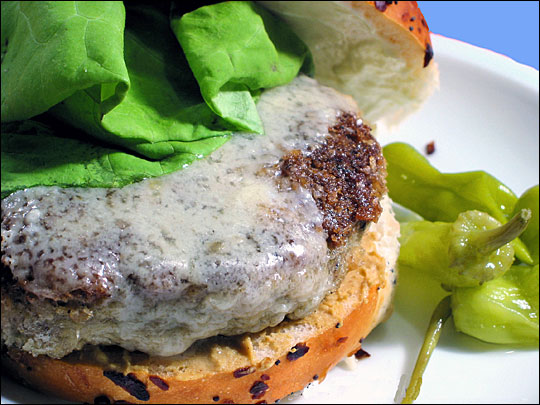 I experimented with pork burgers until I finally figured out the right mix of flavors. To gild the lily, I made black pepper and garlic buns to serve them on. There is so much flavor packed in the burgers that they need only a dab of mayonnaise, a slice of cheese and a leaf or two of lettuce to achieve perfection.

Dice bacon into 1/4-inch pieces. Mix all ingredients together (hands work best). Form into 4 patties about 1/2-inch thick. Place patties on a baking sheet or plate, cover with plastic wrap and refrigerate for 30 minutes to an hour to allow burgers to set so they'll hold together while cooking.

Grill over medium heat for 4 to 5 minutes per side, or cook in a skillet or on a griddle, either non-stick or lightly brushed with oil, over medium-high heat for the same amount of time. 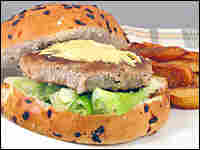 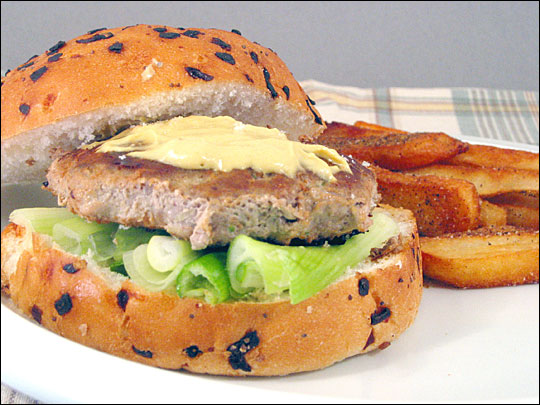 Ground turkey may be low-calorie, but it also can be bland and dry. In this recipe, the zucchini adds moisture (you won't really taste it), and the teriyaki ingredients add an Asian flavor. I serve these on onion rolls. Note: Even with the bread crumbs and egg for binding, these burgers tend to fall apart on a grill, so I recommend cooking them in a non-stick pan with a little bit of oil.

Thoroughly combine all ingredients in a mixing bowl. Form into 4 patties about 1/2-inch thick. Place patties on a baking sheet or plate, cover with plastic wrap and refrigerate for 30 minutes to an hour to allow burgers to set so they'll hold together while cooking.

Cook in a non-stick pan over medium-high heat for 4 to 5 minutes per side.

Years ago, an English friend described a lamb roast he'd stuffed with fresh mint and blue cheese. He didn't have a recipe, but it sounded delicious, so I developed one. Last summer, I taught a cooking class on lamb and wanted to serve the roast, but didn't have time in the class to make and cook it. My solution was the lamb burgers below. I like to serve these stuffed in pita halves to catch the juices and cheese that inevitably leak from the patties.

Divide cheese into 4 pieces and form each into a 2-inch round.

Thoroughly combine remaining ingredients in a bowl. Divide the mixture into 4 portions and flatten into patties about 5 inches in diameter. Place a piece of cheese in the center and fold the edges of the patty up over the cheese, pressing to seal. You should end up with a patty that's about 4 inches in diameter and 3/4 of an inch high. Place patties on a baking sheet or plate, cover with plastic wrap and refrigerate for 30 minutes to an hour to allow burgers to set so they'll hold together while cooking.

Grill over medium heat for 4 to 5 minutes per side, or cook in a skillet or on a griddle, either non-stick or lightly brushed with oil, over medium-high heat for the same amount of time.