Accessibility links
Swiss Town Guards Itself Against Climate Hazard In Switzerland, one town saw global warming coming and built a dam to stop it. The Swiss resort of Pontresina, near the Italian border, is 5,900 feet above sea level, which is on the high end — even in Switzerland. But higher still, right above the town, is a mass of warming permafrost. 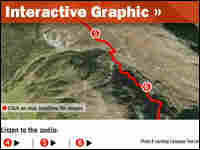 View an interactive trail map that takes you on a virtual tour of the climate change. Lindsay Mangum, NPR hide caption 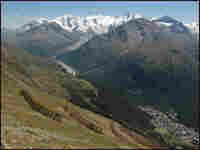 Various measures, including building these fences, were taken over the years to protect against avalanches. Christine Rothenbuehler hide caption 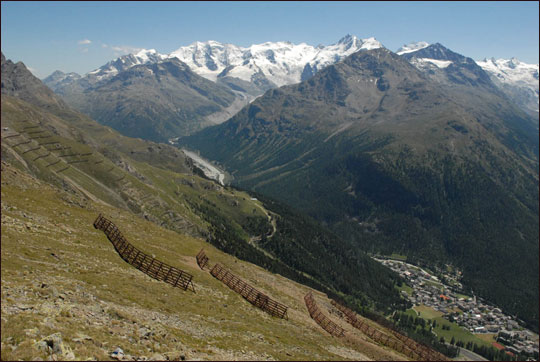 Various measures, including building these fences, were taken over the years to protect against avalanches. 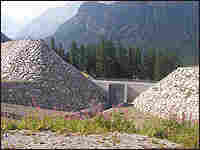 Part of the dam built by the town of Pontresina in anticipation of melting permafrost due to global warming. Emily Harris, NPR hide caption 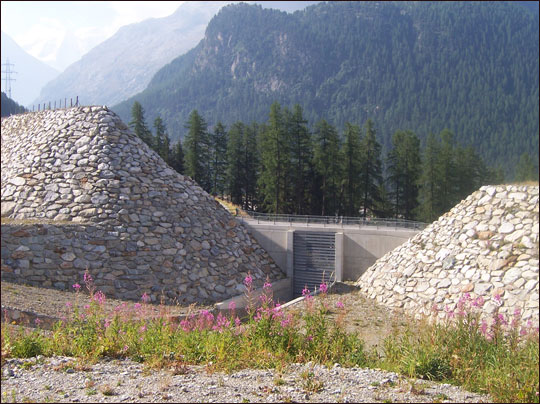 Part of the dam built by the town of Pontresina in anticipation of melting permafrost due to global warming.

In Switzerland, one town saw global warming coming and built a dam to stop it.

The Swiss resort of Pontresina, near the Italian border, is 5,900 feet above sea level, which is on the high end — even in Switzerland. But higher still, right above the town, is a mass of warming permafrost.

Permafrost expert Felix Keller estimates that the ice in the earth is holding together enough rock and debris to fill 100 or so houses.

"When the permafrost melts in the debris-covered areas, at first moment, nothing happens," Keller says. "But by the next strong rainfall, the danger of debris flows is much higher."

Right down the mountainside from the permafrost, there's a 17th-century church, as well as the town's leading hotels, and the school. But in between, there's a four-year-old dam.

It's a very short drive from the town to the dam, where former community president Eugen Peters shows off the structure's two massive earth-and-stone walls, designed to let water through but stop everything else.

No one knows when, or if, the $6.5 million dam will be tested by a landslide, but resident Martin Schmutz calls it an insurance policy for the town.

Of whether a landslide will happen, Schmutz says, "It (could) be soon, we had some heavy rains in other places in Switzerland."

Flooding and an increasing number of rock falls – some deadly — have heightened awareness in Switzerland about the natural hazards this country faces as the earth warms. Pontresina is often described as the first town in this well-organized country to do something proactive to protect itself against the effects of climate change.

But the dam wasn't an easy sell. Some residents doubted there was really permafrost uphill from them. Others doubted it would melt. The number of trees chopped down to make way for the dam was controversial. And then there was the question of what to tell the tourists.

"After the construction, many people asked why did they do that, and is it because before it was not safe? And they had many questions but now nobody asks anymore," says Alexander Pampel, whose family manages the Sport Hotel, directly below the dam.

A brochure published for visitors says a feeling of security is essential for peace of mind, and touts the dam as evidence the resort cares about protecting its guests. And although it increasingly blends into the landscape, the dam has been incorporated into a tourist attraction.

A mountain railway carries visitors to 8,000 feet, the start of Pontresina's climate change trail. Signs along the walk explain the basics of the local geology and global warming. The trail passes through steep slopes littered with avalanche fences, some hewn by hand from stone 100 years ago.

"The authorities of Pontresina and also the population, due to the avalanches — snow avalanches — they are used to (acting). They know what they have to do," Keller says.

Towns in this valley are worried the effects of global warming could slow tourism, so they are actively trying to promote themselves as doing something to fight climate change. The neighboring luxury resort of St. Moritz has put together a "clean energy tour" – showing off solar panels on ski lifts and a hotel heated using water from a freezing cold lake.

After all, he says, the natural environment is ultimately all the area has to sell.

In an effort to survive, many are beginning to heavily push summer hiking and biking. In addition, some are promoting themselves as leading the fight against climate change. Tourism officials hope this will give them a new edge.

Here's a look at how a few resort areas have approached the issue: