Accessibility links
Houston Holds Hope, Despair for Katrina Evacuees Two years after Hurricane Katrina emptied New Orleans, more than 90,000 evacuees live in Houston, permanently it seems. Life for all of them has been difficult, and their stories are a mix of sadness, loneliness and triumphant hope. 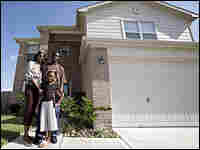 Two years ago, Terry Gabriel and her children fled their home in New Orleans during Hurricane Katrina. Now, Gabriel — shown here with son Earl Gabriel, 15, and daughter Terranisha Odom, 7 — are living in a new home in Houston. Michael Stravato for NPR hide caption 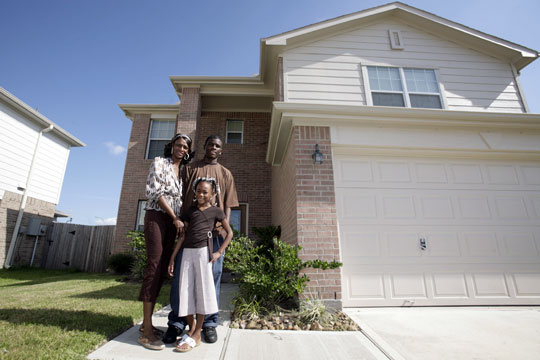 Two years ago, Terry Gabriel and her children fled their home in New Orleans during Hurricane Katrina. Now, Gabriel — shown here with son Earl Gabriel, 15, and daughter Terranisha Odom, 7 — are living in a new home in Houston. 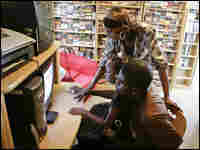 Gabriel, with her children, says of her new life in Houston: "Every day I wake up, I feel like a million bucks." But life is much more difficult for many other Katrina evacuees. Michael Stravato for NPR hide caption 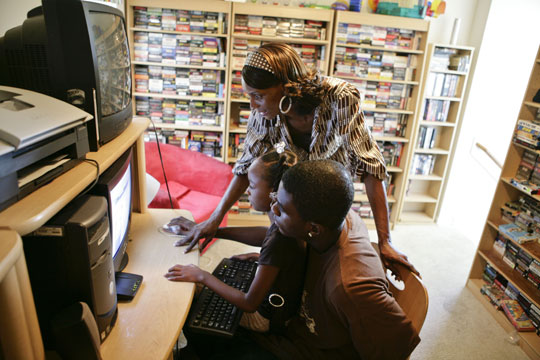 Gabriel, with her children, says of her new life in Houston: "Every day I wake up, I feel like a million bucks." But life is much more difficult for many other Katrina evacuees.

Does building a new life in Houston mean forgetting an old one in New Orleans? It's a question many evacuees struggle with. Read that story.

Two years after Hurricane Katrina emptied New Orleans, more than 90,000 evacuees live in Houston, permanently it seems. Their stories are a mix of sadness, loneliness and triumphant hope.

One of those Houston transplants is Terry Gabriel. At 40 years old and 6 feet 1 inch tall, Gabriel still seems very much the star basketball player she once was. Strong, attractive and charismatic, Gabriel carries with her an unshakable Christian faith.

Hurricane Katrina tested that faith. Gabriel, her sister and four children fled the storm in a rental car and began living on the floor of the Houston convention center.

Like her fellow evacuees, Gabriel was shell-shocked and disoriented. But she understood earlier than most that her life in Louisiana was over: After a week, she began looking for a job.

"It was so stressful; you were thinking, 'Work just yet?' But what I was seeking first and foremost was a church home ... I needed stability and I didn't have it mentally," Gabriel says.

In the last two years, Terry Gabriel has come a long way.

She lives in a new Houston suburb, in a new two-story, two-garage house she's renting to own. Gabriel praises the neighborhood's manicured lawns, and polite, kind and loving neighbors.

Gabriel first landed a part-time job with UPS as a small-package sorter in a warehouse without air conditioning. Four women applied for the job, but when it came time for the second round of interviews, Gabriel was the only one who showed up.

With that, Gabriel landed her first job; soon, she added a second — manning a beer stand at the Houston Astros games. In Houston, Gabriel could end up being a success in a way she may never have been able to in New Orleans.

Her three children are attending new schools with healthy budgets, decked-out sports teams and big bands for half-time. As an evacuee, the federal government is helping her pay her rent, and that $900 monthly subsidy makes all the difference. For the first time in her life, Terry Gabriel is living the American dream.

Her subdivision is so new "it's not even on MapQuest," Gabriel exclaims. "God is good. I love it. I mean, I feel as though I fit right in; I don't feel like a sore thumb. Every day I wake up, I feel like a million bucks," she says.

This is Houston's right hand, the one that gives to the evacuees. It gives them its powerful economy, inexpensive new homes in far-flung suburbs, and public schools collectively educating Asian, Indian, black, white and Hispanic children. Taken together, it is a powerful offering.

But Houston has two hands.

'Where Do We Go From Here?'

In a three-bedroom apartment in southwest Houston, four Katrina women evacuees, all related, live with their 14 children. Twelve of them came to Houston together from New Orleans that fateful day, all in a single Grand Am. The five-hour trip took three days.

Lorenthia Richardson was one of those women. She recalls that when they arrived, they had no clothing, no furniture. They pooled their money and rented a single apartment.

Richardson had been a nursing student in New Orleans. She quickly enrolled in nursing school in Houston in a desperate attempt to continue her previous life, but ended up having to drop out.

"I guess mentally I was not prepared. In most situations, when you have a chaotic situation, there's one level-headed person who will say, 'This is what we're going to,'" Richardson says. "Well, I'm usually that person, but at this point I could not figure it out."

In New Orleans, in addition to nursing school, Richardson worked part time at a hospital. Before the hospital, she was a Wal-Mart manager for three years. But in Houston, a job interview was elusive.

When she would call to follow up on applications, Richardson says potential employers would say they couldn't find her application. She told them she would reapply, and she did, to no avail.

Richardson knows how to dress and act for the professional world. That's not her problem. Her problem is that she is a black, single mother from New Orleans. For two full years, Richardson has been unable to land a job, despite more than 50 separate attempts.

This is Houston's other hand, the one that slaps evacuees around.

Despair Difficult to Keep at Bay

Take Donna Rodriguez and her four children, for example. Rodriguez is Lorenthia Richardson's cousin. While searching a Red Cross database, Richardson found Rodriguez's name after two years of not knowing what had happened to her.

Richardson drove over and rescued Rodriguez and her children from a Houston homeless shelter. Rodriguez has fallen through the cracks in the system, and the last two years have left her shattered.

"I can't even express how I feel because I don't think [anybody is ever going to] understand how I feel," Rodriguez says between uncontrollable tears, her sense of helplessness and frustration palpable.

With the addition of Rodriguez and her children, Richardson is now providing shelter to 18 evacuees in her three-bedroom apartment.

In many quarters, Houston's patience with the Katrina victims has run out, and evacuees are left to help one another. But just when the future looks bleakest, sometimes Houston reaches down with a helping hand.

Two weeks ago, Lorenthia Richardson landed a full-time job with benefits. It's as a case worker for a private agency that has helped her and more than 1,500 other Katrina evacuees.

The Houston agency also agreed to enroll Richardson in nursing school and pay for it. She starts next month. And just like that, Richardson — and the women who depend on her — have hope.

Rebuilding in Houston, Evacuees Grapple with Past 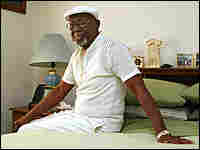 William C. Robinson Sr. is seen in his home near Houston. Robinson once had an active life in New Orleans, but doesn't have much of a social network in his new life in Houston. He spends a great deal of time alone in his apartment. Joe Vela for NPR hide caption 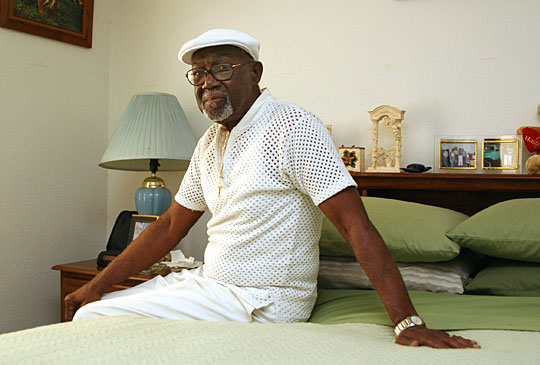 William C. Robinson Sr. is seen in his home near Houston. Robinson once had an active life in New Orleans, but doesn't have much of a social network in his new life in Houston. He spends a great deal of time alone in his apartment.

Robinson on His Previous Life in New Orleans 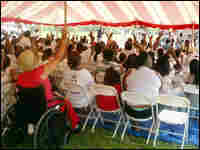 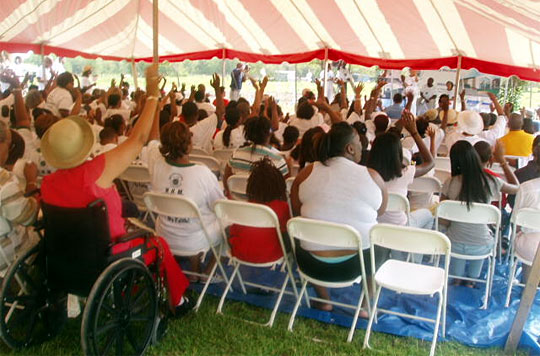 Parishioners of the New Home Family Worship Center, devastated by Hurricane Katrina in New Orleans, hold a groundbreaking ceremony for a new building in Houston.

Two years after Hurricane Katrina, about 90,000 people evacuated from New Orleans still live in Houston. For them, there's no going back.

But living in Houston can be like moving out from your mother's warm embrace and moving in with your successful older brother, who doesn't necessarily approve of your life choices.

In New Orleans, many people grew up surrounded by family. The city was smaller and commutes were short. In Houston, there are more jobs, but it can be hard to get around, even if you have a car.

Hiding a New Orleans Past

Action CDC is a privately funded agency whose 12 case managers have helped more than 1,500 evacuees find cars, housing and jobs. Perhaps most importantly, they help negotiate the bureaucratic mazes of government aid.

But Ruqayya Gibson, the group's Katrina aid director, says two years after the hurricane, there are still major obstacles to helping the evacuees living in Houston. For one, single black women from Louisiana are having a hard time getting hired.

Gibson says Katrina evacuees are seen as tainted. She advises them to trade in their New Orleans cell phones and get a Texas driver's license. But that still doesn't completely erase their old identity. Adds Gibson, "You have to give a resume and their work history all points back to Louisiana. "

Transplanted Church Is a Source of Strength

Denying their previous life in New Orleans is tough. But a congregation made up of Katrina evacuees is embracing the past as the foundation for a new life in Houston. Pastor R.C. Blakes, Jr. is ministering to 400 parishioners transplanted from the New Home Family Church in New Orleans. They recently broke ground on a new church building in Houston. There will now be buildings in both cities, but their pastor hopes they will be just one congregation.

While these worshipers have found one another in Houston, there are thousands of evacuees, especially older ones, who are lonely and isolated.

William C. Robinson Sr., 74, is a former shipyard worker who spent his life at the Avondale yards. He's retired and he has enough money to get by, so he's not looking for work. But he doesn't know anyone in Houston.

"I'm in here most of the time," Robinson says, sitting in his apartment. "I go to the movies. I don't know any other place to go."

In New Orleans, Robinson owned his own home. He knew everyone in his neighborhood. Now, he's trying to make the best of a bad situation.

"My whole life has been taken from me," he says.

Action CDC says it is working on getting Robinson into a home for senior citizens, where there will be other people and things to do. But the maze of federal Katrina funding makes every change a challenge.