Accessibility links
Cheesemakers Taste a Change in the Weather Alpine cheese is as distinct as the milk it is made from – milk that tastes of the grasses and flowers eaten by alpine cows. But as the weather changes, some makers of alpine cheese worry that they won't be able to continue producing traditional cheeses.

Listen
Cheesemakers Taste a Change in the Weather 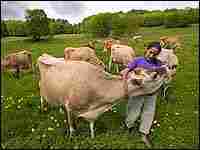 Janine Putnam and her husband, John Putnam, decided to make alpine-style cheese because they say the Alps have a climate most similar to the climate they have in Vermont. Dennis Curran hide caption 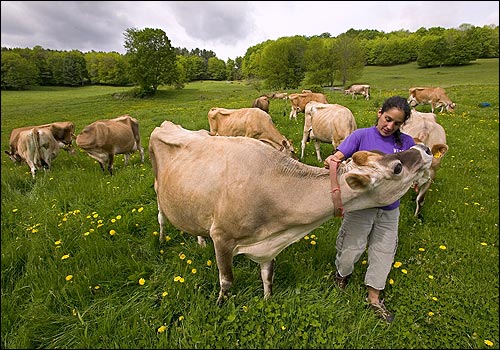 Janine Putnam and her husband, John Putnam, decided to make alpine-style cheese because they say the Alps have a climate most similar to the climate they have in Vermont. 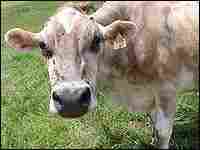 The milk from these cows that is used to make cheese hints at the grasses and wildflowers they graze on. Ketzel Levine, NPR hide caption 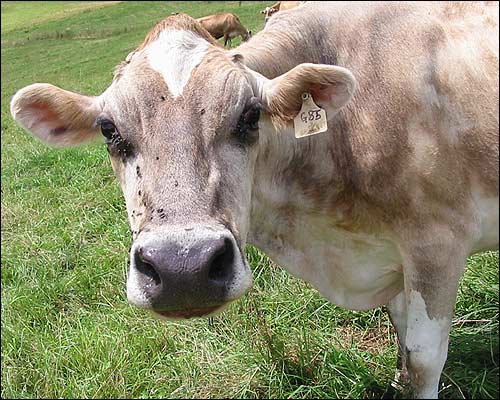 The milk from these cows that is used to make cheese hints at the grasses and wildflowers they graze on. 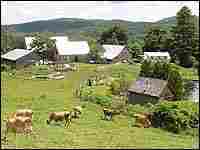 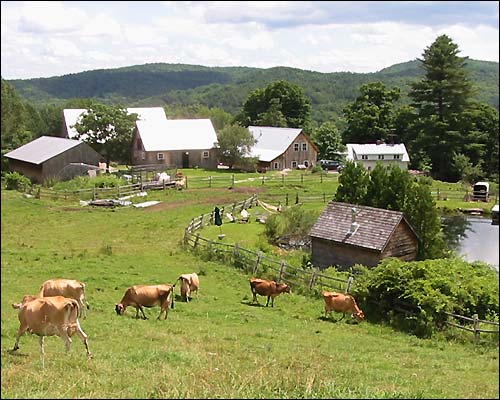 Cows in bucolic splendor. A blue sky pillowed with clouds. Such is life for cheesemakers John and Janine Putnam, owners of Thistle Hill Farm.

Taste the couple's Beaufort cheese, made in North Pomfret, Vt., and you're likely to find it salty, nutty and sweet. Yet without even tasting it, just by its fragrance, John Putnam can tell what the weather was at the time the cheese was made.

The Putnams make an ever-changing traditional alpine cheese, and just like the weather, no two cheese wheels are exactly alike. Their May cheese tastes of orchard grass, the first plant to dominate their pastures. Their summer cheese is more complex, including two kinds of clover, several grasses and a garnish of dandelion.

"We make this alpine-style cheese," Janine Putnam says, "because we felt the Alps had a climate most similar to what we have in Vermont."

"And we all have the same challenges," John Putnam says. "Probably above all else, the weather."

"Yeah, global warming is really depressing. Everybody's talking about it," says Pelletier, who, like the Putnams, makes Beaufort cheese. Pelletier's worry is the unprecedented heat in the French Alps, which is making cows thirstier. Drinking more water, says Pelletier, dilutes the proteins and fats in the cows' milk. And that costs the cheesemakers, who must use more milk to create the same amount of cheese.

The flora in the Alps is slowing changing, too. Pelletier is seeing plants native to the south of France seeking refuge in his own mountainous backyard. And a change in flora, he says, might someday change the taste of alpine cheese.

"I think the flowers are following the temperature, and when it's too warm, they grow in higher altitudes," Pelletier says. "We just adapt our methods to keep traditions and to keep the same taste in the cheese. But I think that will become harder and harder."

As Local Climate Changes, Local Cheeses May Change Too

Right now, flies are more of a problem than heat for the content cows at the Thistle Hill Farm. But for their owner John Putnam, the worry is the wetter and cooler weather in Vermont.

That's because climate is the bottom line when it comes to traditionally made cheese.

"It's no accident that feta was made in Greece, that cheddar was made in England, that the blues were made in the lowlands, that the alpine cheeses came from uplands where it's high and dry," Putnam explains.

So if Vermont gets wetter, can the Putnams continue to make alpine cheese?

"I think we might be forced to change, not that I want to!" John Putman says.

Vermont, as you may know, is cheddar country, a cheese the Putnams do not entirely malign. But they're after a cheese with more nuance — as distinct as the land, as sweet as the flora, as variable as the wind.