Accessibility links
Overwhelmed New Orleans Teacher Quits Matt Roberts moved to New Orleans last year to teach. He wanted to make a difference as a teacher in the city's troubled public schools. But now he has decided to quit. He explains why in this commentary.

Matt Roberts moved to New Orleans last year to teach. He wanted to make a difference as a teacher in the city's troubled public schools. But now he has decided to quit. He explains why in this commentary.

Here's another voice you've heard before. Last spring we aired a story about people who moved in New Orleans to teach in public schools. Matt Roberts was one of them. What we didn't know was just how badly things were going in Matt's classroom. He left the school and he sent us this commentary about feeling like a quitter when he sounded like a hero on MORNING EDITION.

Mr. MATT ROBERTS (University of New Orleans): When the story aired, the phone calls started. A friend who develops school enrichment programs heard it while he was rebuilding a stranger's house in the Ninth Ward. Another friend, working towards a Ph.D. in music, told me hearing that story reminds me why I'm doing this. But now I'm just another teacher who turned his back on a classroom full of children in a poor district.

Two days before the story ran, I became the fifth teacher to leave that school since it opened in March. My principal tried to convince me to stay. But in the end she told me not to consider my leaving a failure.

That only made me feel like more of a failure. I taught the kids in my classroom the lesson they most desperately need not to learn - that it's okay to quit.

I could blame the lack of discipline in the school or the color of my skin. When I told one student to sit down, he said, I ain't going to shine your shoes.

I could blame the fact that I've been profoundly unhappy since we moved back to New Orleans. Coming home, it started to seem like a grave mistake. My five-year-old daughter misses her friends. My son's preschool is concerned about his anger issues. We had a new Superdome for the Saints games and a clean French Quarter for Mardi Gras. But many of our public schools remained unrenovated and unrebuilt after Katrina.

Of course, these are all excuses. I know this. I tell myself I stepped aside so some learning might take place in the classroom with another teacher. Then, driving past the street corner, I see one of my former students. I know he should be in school and I get angry. I know he'll wander from classroom to classroom, carrying a tiny slip of white paper with yet another checkmark beside the word unexcused.

And that's all that will happen because where else is this child going to go? I'm angry, but not really at my student, who doesn't care about his future, or at his parents, who didn't teach him the difference between right and wrong, or at the school administration that won't hold him accountable. I'm not even angry at myself for failing to be a better teacher. I'm just plain angry, because if there is one thing those of us living here in Katrina-land are sick of, it's excuses.

MONTAGNE: Matt Roberts is now an instructor at the University of New Orleans.

This is the second in a three-part series. 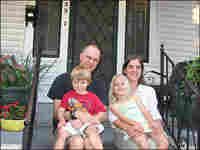 Matt Roberts, an English teacher at a New Orleans high school, sits with his wife, Jennifer, and their children, Carter, 3, and Chloe, 5. Roberts, a New Orleans native, returned to help with the recovery efforts but says he wasn't prepared for the problems he faces in the classroom. Jennifer is applying for a teaching position, but listening to her husband's classroom stories gives her second thoughts. Larry Abramson, NPR hide caption 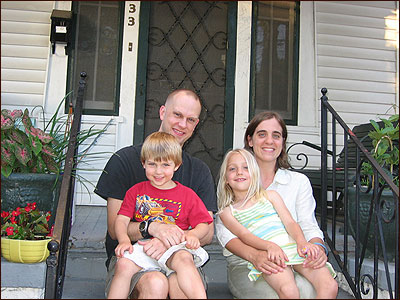 Matt Roberts, an English teacher at a New Orleans high school, sits with his wife, Jennifer, and their children, Carter, 3, and Chloe, 5. Roberts, a New Orleans native, returned to help with the recovery efforts but says he wasn't prepared for the problems he faces in the classroom. Jennifer is applying for a teaching position, but listening to her husband's classroom stories gives her second thoughts.

Read more of NPR's three-part report about the progress of New Orleans schools since Hurricane Katrina:

One of the challenges facing New Orleans residents as they try to rebuild is finding hundreds of new teachers to serve a rapidly growing student population before schools re-open in September. Local school officials who have been urging students to return are now struggling to find enough teachers.

Teacher Dorothy Riley is supposed to be retired, but she came back to teach kindergartners at Drew Elementary School in New Orleans' Ninth Ward.

"I felt as though if a child ever needed a teacher, it was after Katrina," Riley says. Riley lived with her mother in Lafayette after the hurricane, but she says she felt she had to return to New Orleans.

"I don't think it was my decision. I think it was a decision from the Lord to go down and touch somebody and bring these children up," she says.

The city will need hundreds of teachers like Riley to serve a system where 200 new students enroll every week. Many of the charter schools that have opened their doors in New Orleans are full. Earlier this year, parents sued when 300 children were turned away.

To avoid more trouble in the coming year, local school officials have kicked a major recruiting effort into gear.

Novelt Estrella, part of a recruiting and training effort called TeachNOLA, is responsible for keeping track of about 70 applicants.

"People from all over the country are applying here — interesting people with a lot of skill and intellect and passion," Estrella says.

New Orleans is growing rapidly, while other big city school systems are closing schools left and right. So the Crescent City might look appealing to laid-off teachers in other places.

Teachers from out of town also are drawn by housing subsidies and a $5,000 bonus the state now offers for teachers who stay a full year.

The new crop of teachers may find that many schools are running smoothly. But in others, pre-Katrina problems have been magnified by the educational storm that followed the hurricane.

At Walter Cohen High, one of five new schools opened during the past few months to cope with growing enrollment, English teacher Matt Roberts tries to get a lesson started one day with only seven students in class.

Some of the others are apparently in in-school suspension. Those who have arrived are bored and unprepared. Roberts struggles to get the students on task. He bounces around the room, giving each student one-on-one instruction.

But as Roberts focuses on one student, the other six quickly get off track. One student hides behind a file cabinet and sends text messages on his phone. Because the school has only been open for a few weeks, a computer-based reading program isn't ready, giving students one more thing to grouse about.

Roberts has seven years of experience teaching out of state — but, he says later at home, nothing prepared him for threats and other problems he now faces at school.

Roberts and his wife are New Orleans natives who returned in part to help with the recovery effort. They questioned their sanity when they found themselves bathing their kids from a kitchen pot because their home had no hot water. But Roberts says all the challenges he faces are matched by the huge rewards.

The promise of those bright moments keeps luring potential teachers. A woman from New York who walked into the school district offices one day says she's ready to sign up even though she'll have to take a major pay cut and cover the cost of getting certified herself.

"I used to live here, and [I've] just been missing New Orleans like nothing else, especially after the storm. When you see the way the city's really been let down, I just need to come back and just give some kids a shot at an education."

The city's Recovery School District has filled one important post — Paul Vallas, chief executive officer of the Philadelphia city schools, has agreed to take over as chief in New Orleans starting July 1.