Accessibility links
Pilgrims Flee Violence in Karbala; 24 Confirmed Dead Thousands of Shiite pilgrims are fleeing the Iraqi city of Karbala, where fierce clashes between rival factions have left at least 24 dead. Clashes at the holy city south of Baghdad erupted as thousands of pilgrims came from around the country for a Shiite religious festival.

Thousands of Shiite pilgrims are fleeing the Iraqi city of Karbala, where fierce clashes between rival factions have left at least 24 dead. Clashes at the holy city south of Baghdad erupted as thousands of pilgrims came from around the country for a Shiite religious festival.

NPR's Corey Flintoff joins us now from Baghdad. And Corey, break down who's fight who?

COREY FLINTOFF: It's pretty hard to tell, frankly. The story that we haven't been able to independently confirm yet is that the fighting broke out when one of the shrine guardians tried to prevent a member of the Mahdi militia from entering the area with a pistol. And this is where it shapes up as a factional fight between Shiites because the shrine guards are loyal to the Grand Ayatollah Ali al-Sistani and the Mahdi militia supports the anti-American cleric Muqtada al-Sadr.

So this fight apparently broke out in the neighborhood slightly north of the two major mosques there, but it spread into the area around the shrines. And when the Iraqi army and police tried to move into the area, evidently they were attacked by snipers from the Mahdi militia.

So that's when the fighting really got intense. Pilgrims were packed right into the middle of it. There were a couple of police cars burned by rocket-propelled grenades. There was sniping going on. There was - a house of one key Sistani aide was burned. And what we hear right now is that there's still shooting going on.

MONTAGNE: So what do you make of the fact that Muqtada al-Sadr's office released a statement saying that his forces, the Mahdi army, are not involved in this fighting?

FLINTOFF: Well, it seems pretty unlikely. The pilgrims have made their way to Karbala for this festival, many of them on foot all the way from Baghdad. And even places even farther away. And as they've gone along, they passed through really intense security. There was great fear that this festival would be marred by violence. And so they passed through checkpoint after checkpoint. They've been searched over and over again. There really doesn't seem to be any way that anyone could have smuggled in sniper rifles and rocket-propelled grenades and some of the weaponry that's been used in this fighting.

MONTAGNE: And these checkpoints were set up initially because the fear was there would be attacks from Sunni insurgents.

FLINTOFF: Exactly right. That was the big fear.

MONTAGNE: Tell us about the evacuation. Is it disorderly? Dangerous?

FLINTOFF: Well, yes. Both. Imam Shirazi, who is the leader of the Imam Hussein mosque, one of the major shrines, issued an appeal to negotiate between the two sides, and not only to stop further bloodshed but also to evacuate the wounded who are now lying in the streets around the holy places. And of course he also wants to get as many people as possible safely away from Karbala in case this fighting goes on.

But tonight it's really a culmination of the Shiite religious festival and people will presumably be reluctant to go far away, even with the danger. So we've heard some apparently false rumors of stampedes where people were hurt. But it certainly is going to be nearly impossible, one would think, to get hundreds of thousands of people safely out of that city.

MONTAGNE: Corey, thanks very much. 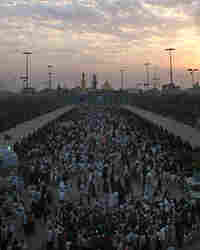 The early calm of Shiite pilgrims gathering at the Imam Hussein shrine ahead of the Aug. 28 celebrations was soon shattered by attacks in Karbala. Mohammed Sawaf/AFP/Getty Images hide caption 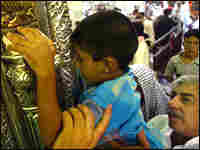 An Iraqi Shiite boy prays over the tomb of Imam Abbas in Karbala, south of Baghdad on Sunday. Mohammed Sawaf/AFP/Getty Images hide caption 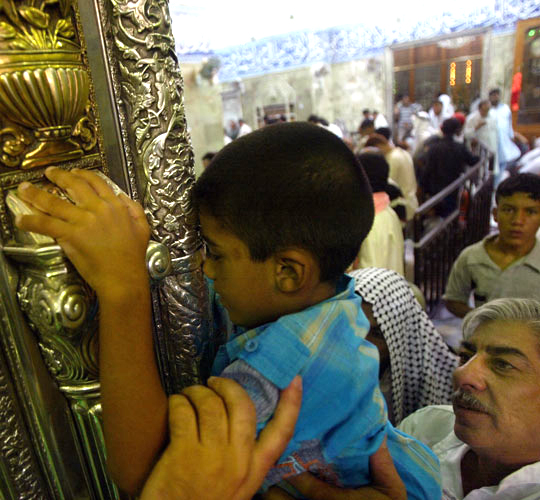 An Iraqi Shiite boy prays over the tomb of Imam Abbas in Karbala, south of Baghdad on Sunday.

A curfew was imposed in the Shiite holy city of Karbala on Tuesday and more than 1 million pilgrims were instructed to leave after violence killed at least 27 people and wounded dozens of others during a religious festival.

Maj. Gen. Abdul-Karim Khalaf, an Interior Ministry spokesman, gave the toll of dead and wounded to The Associated Press, and said the "entrances and exits to Karbala have been secured and more forces are on the way from other provinces."

Another official in the ministry accused the Mahdi Army militia of radical Shiite cleric Muqtada al-Sadr of attacking government security forces in the center of Karbala, site of two Shiite shrines under the control of the Supreme Iraqi Islamic Council.

Al-Sadr's forces are battling SIIC for power in regions south of Baghdad.

The official, who would not allow his name to be used for security reasons, said the government in Baghdad was sending buses to Karbala to take some of the pilgrims out of the city.

Gunshots rang out in the area near the Shiite shrines, which are the focal point of celebrations marking the birthday of the 12th and last Shiite imam, who disappeared in the 9th century. The festival was to have reached its high point Tuesday night and Wednesday morning.

The 27 dead were killed in two outbursts of gunfire - one Monday night and a second about midday Tuesday. Police initially blamed Shiite pilgrims trying to push past frustratingly slow security checkpoints near the Imam al-Hussein mosque.

He said the gunmen who fought police were "criminals," adding that the curfew was imposed because of fears for the many pilgrims.

"The situation now is under control but what is worrying is that the pilgrims are in huge numbers. ... The area where they were gathering has been evacuated in order to control those (criminals)," Khalaf said. He said the gunmen were gathering in three areas in the old town and security forces were chasing them.

A member of the city council said the center of town was in chaos, with pilgrims running in all directions to escape the gunfire. No one, he said, was sure who was doing the shooting. He said a rocket-propelled grenade exploded near the shrine.

"We don't know what's going on," said the councilman, who wouldn't allow use of his name for security reasons. "All we know is the huge numbers of pilgrims was too much for the checkpoints to handle and now there is shooting."