Accessibility links
StoryCorps Griot: Surviving Katrina In this week's StoryCorps Griot Initiative, New Orleans police officer David Duplantier, who lived through the hurricane, can't forget what happened after the storm. He remembers working at the Superdome the night Katrina hit. 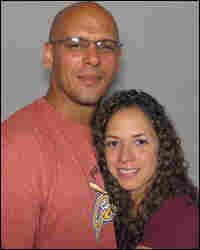 A 16-year veteran of the New Orleans Police Department, David Duplantier went on patrol at the Superdome on Sunday, Aug. 28, 2005. He was there for more than a week.

The Superdome was meant to be a refuge, a temporary shelter before those trapped in New Orleans could be evacuated. But instead of withstanding the storm, Duplantier says, "the roof literally looked like an eggshell. It started to peel. And you could hear the wind."

The floodwaters rose all around the Superdome, essentially trapping those who sought shelter there. But, Duplantier says, "The people never stopped coming in."

His wife, Melissa Eugene, had already fled inland as Katrina approached. And as he kept working — and not sleeping, Duplantier says, "All I wanted to do was let you know I wasn't dead, I was alive."

When he was released from his duties at the Superdome, "I remember just feeling like I just escaped," Duplantier recalls. He immediately tracked his wife down.

"That was the happiest day of my life," Melissa says.

The StoryCorps Griot Booth is currently in Oakland, Calif. The next stop is Clarksdale, Miss.

All the Griot Initiative recordings are archived at the Library of Congress. A copy of each interview will also go to the National Museum of African American History and Culture in Washington, D.C.

This week's segment was produced by Katie Simon. Senior Producer for StoryCorps is Michael Garofalo.