Accessibility links
Amid Lingering Chaos, Hope for New Orleans' Future While outsiders shake their heads about the many parts of the city that are still unlivable, people who live in New Orleans seem too busy to spend time worrying about what might have been, says correspondent Greg Allen. It's becoming clear, he says, that you can't keep a good city down. 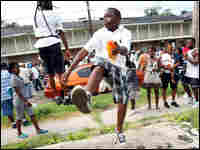 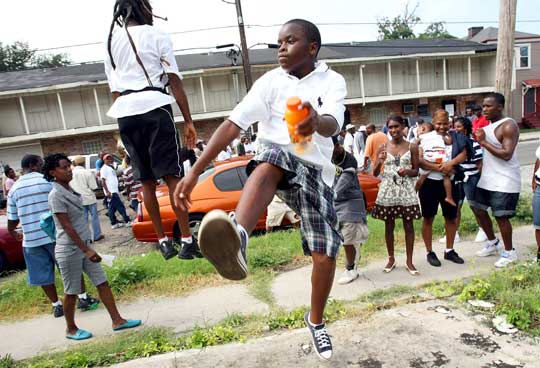 Guests dance during the Valley of the Silent Men Social Aid and Pleasure Club second line parade, Aug. 26, 2007, in New Orleans. The parade is a New Orleans African-American tradition; its numbers have dwindled since Hurricane Katrina.

Commentator Eve Troeh loves New Orleans — in a way that you love a really bad relationship. Lately though, the melodrama has gotten to be too much for her, and she's quitting the city. Read and hear her commentary. 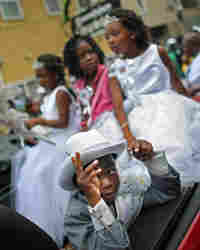 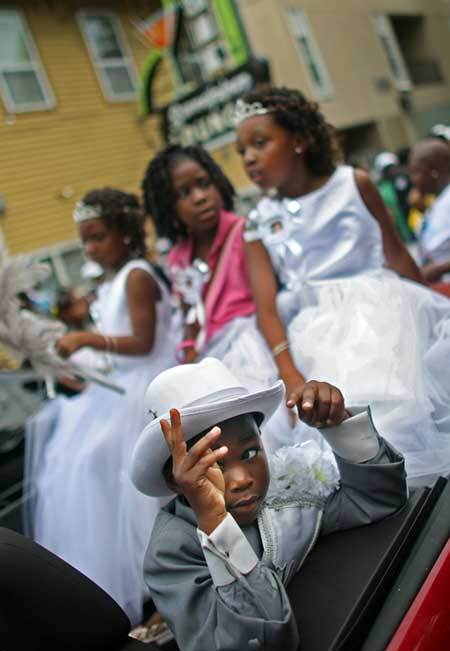 Children participate in the Valley of the Silent Men Social Aid and Pleasure Club parade.

For many of us, the picture we still hold in our minds of New Orleans, two years after Katrina, is one of a flooded city — of desperate people on rooftops or at the Superdome, of mounds of garbage and debris. It's understandable, given the power of the images that were burned into our brains in the weeks after the most destructive storm in U.S. history laid waste to one of America's most distinctive cities.

In the months after Katrina, I covered the story in New Orleans. It's hard to recall exactly when, for me, despair about the city's future began to turn into hope. As urban planners converged on the city, as the Bring New Orleans Back commission began its work, as old residents and newcomers arrived, many of us began to see the devastation as an opportunity to create something better than what we had lost.

Because the fact is, long before Katrina, New Orleans — a unique gem, with its own architecture, food and musical styles — was in many ways a broken city.

Poverty was endemic, the schools were among the worst in the nation, public housing was a mess, streets and other infrastructure badly needed fixing, and political corruption was a fact of life that led many to believe things couldn't change for the better.

But all people—even reporters—need hope. It says something about the human spirit to recall how eagerly we read, and reported, each news story as a sign that out of the rubble, a better city would emerge.

Standing in Jackson Square, President Bush said the federal government would do whatever it takes to bring back New Orleans. Mayor Ray Nagin talked idealistically about a city rebuilt higher and on a smaller footprint, in consultation with engineers and urban planners. Proposals were drawn up for a federally funded redevelopment agency that would buy and sell properties, helping residents relocate and shape the new city.

Then political realities began to settle in. President Bush and his coordinator of Gulf Coast recovery said rebuilding would be driven by the private sector, and that the federal government would only play a supporting role. Mayor Nagin quickly backed away from his comments about a smaller city, as residents of the most devastated neighborhoods and their political representatives began to scream. And soon, the idea of a powerful, federally funded redevelopment authority also dissolved — leaving in its place a weaker and troubled state-run authority.

As people returned to New Orleans, other realities also emerged, taking a toll on hope. Crime, a perennial problem in this tourist-dependent city, resumed with a vengeance. The murder eight months ago of Helen Hill, an acclaimed Canadian filmmaker shot in her Marigny District home, made national headlines, underscoring the dangers that lurk on streets that, two years on, are still patrolled by military Humvees.

A shortage of affordable housing kept many from returning. Fixing the levees turned out to be a project that was more difficult, expensive and iffy than many expected. Key projects — a new hospital complex downtown, revamped public housing, a long-promised Trump hotel and condo project — seemed pipe dreams.

But New Orleans is, if anything, a town that doesn't believe in pessimism. "The Big Easy" and "Let the good times roll" are slogans of a city that doesn't spend time dwelling on unpleasant realities.

While outsiders shake their heads about the many parts of the city that are still unlivable, people who live in New Orleans are too busy to spend time worrying about what might have been.

Walking through still largely empty streets in a section of New Orleans East, a block south of Lake Pontchartrain, I met Joseph Perique. He was fixing his son's car outside of the only habitable house on the block. He was realistic that most of his neighbors wouldn't be back. But that didn't stop him from fixing up his home.

"One thing about New Orleans," he reminded me, "we're strong."

Yes, crime is still a problem. Housing, especially affordable housing, will remain an acute need for years to come. Political corruption hasn't gone away. But such is the draw of the Crescent City that people and businesses continue to flow back, exceeding expectations. Estimates now put New Orleans at between two-thirds and three-quarters of its former population.

And in retrospect, dreams of a federally funded, rebuilt New Orleans designed by urban planners weren't just unrealistic, but maybe also unwise. After all, the strength of New Orleans, the reason it's such a unique place, is that it grew organically — a cultural stew reflected in its food, music and neighborhoods.

It's a mix that was created by Spanish, French, African-American, Creole, Italian, Irish and Cajun influences. Add to that mix the Vietnamese of the Versailles neighborhood, who have pulled together to rebuild their neighborhood without waiting for outside help. New Orleans continues to defy planners, just as it defies order. If you want nice, go to Disney World.

Which is why, two years after Katrina — for me, at least — there's new reason to hope about New Orleans' future. Visions of a shining city on a hill — or below sea level, as the case may be — are long since dead in New Orleans. But after the worst of nature and government neglect, it's becoming clear that you can't keep a good city down. .

NPR correspondent Greg Allen was in New Orleans after Hurricane Katrina, reporting on the initial devastation and rescue efforts. Since then, he's returned to the city on a regular basis to report on rebuilding efforts.

Something Else That Was Lost in New Orleans Sept. 8, 2005