Accessibility links
Taking the 'Foot' Out of Football The good ol' kicker might have too much of a role in football. Commentator Frank Deford has a modest proposal for the NFL.

Listen
Taking the 'Foot' Out of Football 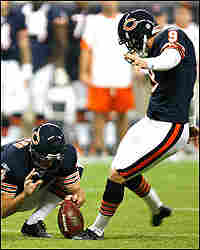 Kicker Robbie Gould of the Chicago Bears kicks the winning field goal out of the hold of punter Brad Maynard in the fourth quarter of their pre-season game at Reliant Stadium in Houston, Texas. Bob Levey/Getty Images hide caption 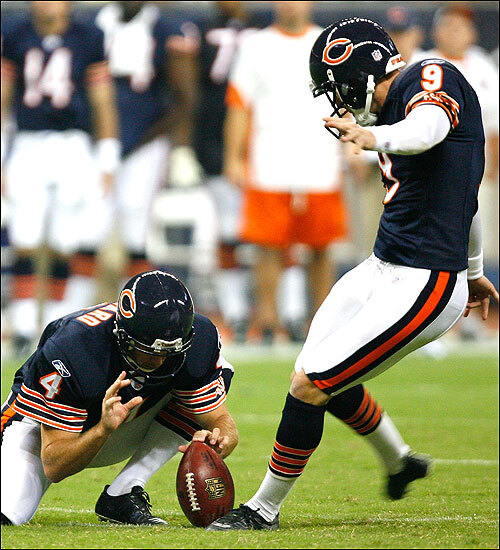 Kicker Robbie Gould of the Chicago Bears kicks the winning field goal out of the hold of punter Brad Maynard in the fourth quarter of their pre-season game at Reliant Stadium in Houston, Texas.

Now that football season is upon us again, I would like to start off by saying: Let's get the foot out of football. It's time to call it, say, passball or smashball. Then we Americans could — like everyone else — call soccer by its proper name, football. Everybody would be much happier this way.

The trouble with our football is that the foot has gotten too prominent. If the feet in soccer were as accomplished as the feet in football, scores would be 9-8 or 12-11 and we'd all be watching Monday Night Soccer. But when I see an American football game now, I'm reminded of the old Fats Waller classic, "Your Feet's Too Big." What the football "feets" is doing is too big for the good of the game.

If football must have the point-after, I say it should be done this way: Have each team that scores a touchdown celebrate in the end zone, and then have people like those awful judges from American Idol determine if the celebration merits an extra point. Certainly, end zone celebrations are much more entertaining than those little one-trick ponies in clean uniforms who come trotting out and kick automatic points.

Field goals have gotten almost as tedious. Now, 80 percent of attempted field goals in the NFL are successful. Good grief, two-thirds of field goals tried from at least 40 yards out split the uprights. Make field goals count only two points. Or, since the goal posts can't fight back, let the defense jump up on each other's shoulders and form pyramids, like those walls in soccer. Make those kickers have to learn to bend it like Beckham.

And punts. Aren't you tired of scaredy-cat coaches with fourth and inches always punting? You got these great running backs churning out yardage down the field, but as soon as it's close, the coaches punt. You might as well have cleanup hitters in baseball bunt. Kicking makes wimps out of football coaches.

Kickoffs are fun to watch, but they're automatic, too — automatic mayhem. You got 22 guys averaging about an eighth of a ton each, wearing armor and colliding at full speed. The soldiers at Antietam and Gallipoli had a better chance.

The colleges are moving kickoffs back to the 30-yard line this year in order to create more fun and brutality. Some coaches have already professed deep concern. The Department of Orthopaedics at Mount Sinai School of Medicine in New York is decrying this insane added danger.

What we should do is only allow those squibbly little onside kicks, where the ball bounces around all crazy, and it's fun and goofy and altogether un-automatic. Or hey, let's just kick the foot outta football and play the game with the good hands that God gave us red-blooded Americans.